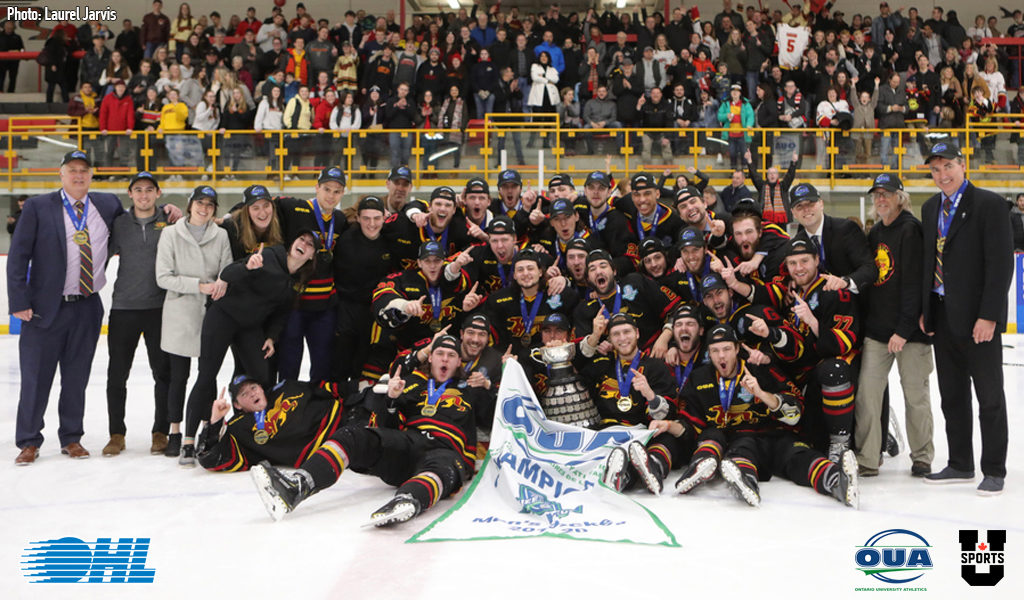 Kingston Frontenacs graduate Ted Nichol scored the game winner 1:14 into the third overtime as the Guelph Gryphons defeated the Ottawa Gee-Gees 2-1 to be crowned Queen’s Cup champions for the seventh time and first since 1997.

“He got me the puck and I just made a good shot short side and it went in,” Nichol said moments after the goal. “I really just blacked out.

“We knew if we stuck to our game plan we were going to get the job done. It took a long time, but we got it done.”

THE WINNER! Every game needs a hero, and with a championship on the line, Ted Nichol gets it done for Guelph in triple OT!#WeAreONE | #OTTvsGUE | #QuestForTheCup pic.twitter.com/XaF8C4CKeo

Marc Stevens (Guelph Storm) got the scoring started 1:39 into the third period on an assist from Giordano Finoro (Barrie Colts) before Ottawa responded less than a minute later. Nichol’s championship-clinching goal came in the game’s 101st minute.

The Gryphons finished third in the OUA West during the regular season, playing to a record of 17-6-4-1. Their playoff journey featured series wins over Laurier, Brock and Western before reaching the Final.

Both the Gryphons and Gee-Gees are off to the 2020 Cavendish Farms University Cup that begins on Thursday in Halifax.