Guelph Storm captain Ryan Callahan became the most prolific goal scorer in Storm history on Saturday night in Plymouth when he scored on the powerplay at 7:05 of the second period.  Callahan’s goal was his 121st in a Storm uniform eclipsing NHLer Jeff O’Neill’s former team mark of 120 goals.

The Storm will honour Callahan for the remarkable achievement before their next home game on Friday, February 24th versus the Belleville Bulls.

Selected 293rd overall in the 2001 OHL Priority Selection, few would have expected Callahan to become the top goal scorer in Guelph Storm history. But less than five years later, the fourth-year forward has left a trail of Storm graduates behind him, including several current NHLers, to become the club’s all-time leading goal scorer.

Callahan joined the Storm in the 2002-03 season where he picked up 14 goals in 59 games missing several contests due to injury.  The Rochester native’s 31 points in his rookie campaign earned him co-Rookie of the Year honours along with Tyler Haskins.

The Storm captured their second OHL Championship during the next campaign with Callahan enjoying a break-out season offensively.  Callahan was instrument in the club’s run to the Championship, leading the Storm in goals during the post-season with 13 markers.  The terrific playoff run for Callahan capped off a tremendous regular season where the second-year forward scored 36 goals and added 32 assists.

At the 2004 NHL Entry Draft, Callahan was rewarded for his play when the New York Rangers selected him in 4th round (127th overall).  Callahan emerged as a team leader on and off the ice during the 2004-05 season and earned the Storm’s Most Valuable Player award when he led the club in goals (28), assists (26), points (54), powerplay goals (9) and shorthanded goals (3) despite missing several games while he represented his native USA at the World Junior Hockey Championship.

With 78 goals in 187 career regular season games, Callahan entered the 2005-06 season needing a career-best 43 goals to surpass Jeff O’Neill’s career milestone of 120 goals.  Despite missing 5 games to open the season while Callahan competed for a spot on the New York Rangers roster, the Storm captain made team-history with 11 games remaining in the regular season.

With 43 goals in Guelph’s first 57 games, Callahan is on pace to score 52 goals this season and become just the third player in team history to reach the 50 goal plateau.  Only former junior scoring star Mike Prokopec, who scored 52 goals in 1993-94 and Todd Bertuzzi who set the Storm single season record one year later with 54 markers have eclipsed the 50 goal barrier. 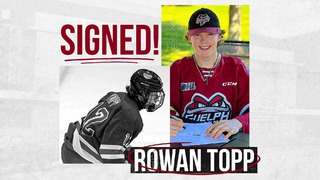 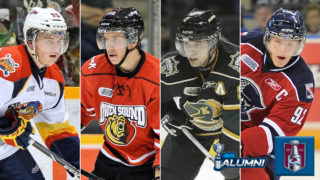