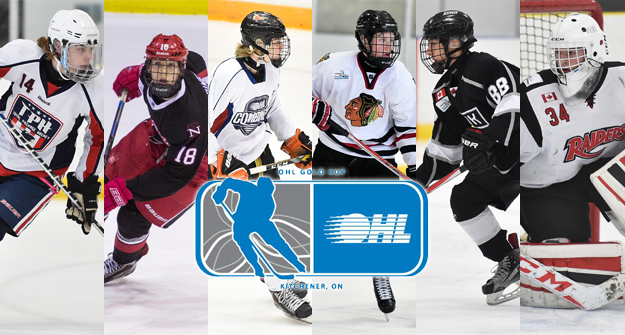 Day 2 of the 2017 OHL Gold Cup in Kitchener featured some big offensive outputs as three different teams scored seven goals or more in victories throughout the day.

Defenceman Alex Hogue (SAR) came away from Day 2 tied for the tournament lead in scoring with fellow Sarnia Sting prospect Jamieson Rees and Saginaw Spirit first round selection Nicholas Porco as all three have five points.

Here’s a look at Friday’s action:

Spencer Hazell (OS) potted a pair while Blake Murray (SBY), Emmett Sproule (ER) and Hayden Fowler (SSM) each had a goal and an assist. Clark Hiebert (GUE), Brayden Guy (SAR) and Josh Houston (FLNT) each recorded a pair of assists.

Leading 3-1 early in the third, OMHA Black would pull away with four goals in just under eight minutes.

OMHA Black took the shooting column 31-19 as Matthew Dunsmoor (MISS) turned aside 18 shots in the victory.

Mathew Hardwick (NB) provided the lone goal in the loss for Team NOHA.

Ajax-Pickering Raiders forward Jacob Winterton (FLNT) led the way with a pair of first period goals and an assist while Dalton Bancroft (SAG) scored the game winner 4:13 into the third period after recording an assist earlier in the game.

Ian Martin (NIAG) found the empty net to seal the deal for OMHA White as goaltender Ethan Taylor (SSM) made 25 saves in the win.

Team HEO bounced back from a Thursday night loss to score eight times in a commanding 8-1 win over Team HNO.

Alex Johnston (SSM) opened the scoring with a pair of quick goals just 26 seconds apart inside the opening two minutes of the game and Team HEO never looked back.

Fellow Greyhounds prospect Joe Carroll recorded a goal and two assists while defenceman Alex Hogue (SAR) had a goal and a helper as did forward Ryan Richardson (PBO).

Defenceman Andrew Perrott (LDN) provided the lone HNO goal as they fall to 0-3 at the showcase after being outshot 37-25.

Graeme Clarke (OTT) and Team GTHL Red improved to 3-0 at the OHL Gold Cup with a 7-3 win over Team NOHA.

Clarke scored twice, with one of his markers coming on his signature lacrosse-style maneuver from behind the goal line that was on display at the 2017 OHL Cup Powered by Under Armour. Blueliner Anthony Aguanno (GUE) had a goal and two assists while Ty Jackson (GUE), Lucas Rowe (LDN), Kyle Harris (FLNT) and Louka Henault (WSR) all had a goal and a helper.

GTHL Red outshot NOHA 40-21 despite being shorthanded a total of nine times in the win.

Camaryn Baber (SAG), Cole MacKay (SSM) and Jacob Peterson-Galema scored for Team NOHA as they fall to 0-3 in tournament action.

Team OMHA Black climbed out to a 4-0 lead, securing an eventual 5-1 win over Team ALLIANCE.

Hayden Fowler (SSM) and Cameron Warren both scored twice, with Fowler scoring twice in just over three minutes to begin the second period. Spencer Hazell (OS) also found the back of the net while Blake Murray (SBY), Andrew Horsley (PBO) and Tanner McEachern (FLNT) each collected a pair of assists.

OMHA Black goaltender Ethan Langevin was a difference-maker, turning aside 33 shots with the lone ALLIANCE goal coming off the stick of Aidan Prueter (SAG).

The two clubs combined for 16 power plays in the chippy affair.

Team HEO prevailed over Team OMHA White in a closely matched affair, holding on for a 2-1 victory.

Alex Johnston (SSM) assisted on a pair of goals from Curtis Fabbro (KGN) and Jack Quinn (OTT) in the second period to put HEO ahead before Zac McMahon (SSM) scored 3:34 into the third to bring OMHA White within a goal.

That’s as close as they’d get though as goaltender Luke Cavallin (FLNT) slammed the door with 23 saves on the night to improve Team HEO to 2-1.

Cole Brady (GUE) was solid at the other end, making 28 saves in the loss as Team OMHA White fell to 2-1.