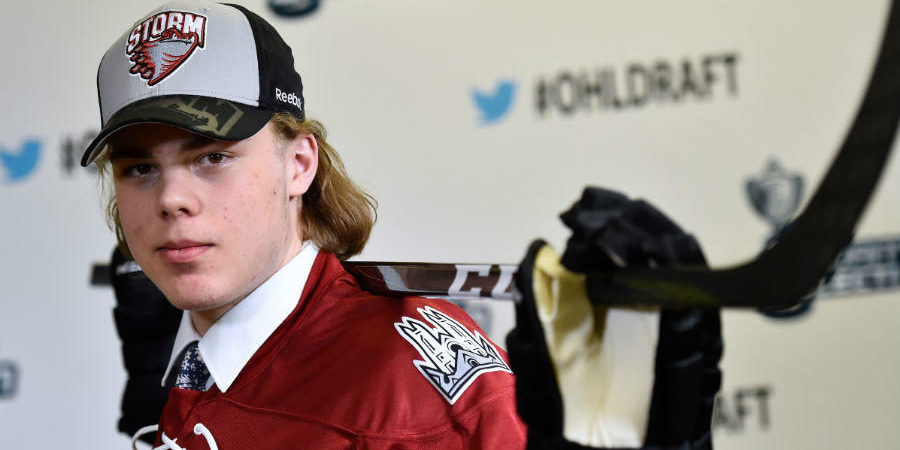 Tag Bertuzzi picked up two assists in Canada Black’s 5-0 win over the Czech Republic on Monday, improving their record to 2-0-0 at the World Under-17 Hockey Challenge.

“We’ve only been together a week now, but we’re coming together really well, bonding both on and off the ice,” said Newhook post-game. “We got off to a bit of a slow start in this game, but the result speaks for itself. We had a good last two periods, we’re happy with the result and hoping to bring tonight’s effort into tomorrow’s game against the U.S.”

Team Canada Red and Team Canada Black both claimed victories on Day 2 of the 2017 World Under-17 Hockey Challenge in Dawson Creek and Fort St. John, BC. Team Canada White came up just short in overtime against the United States while Russia also improved to 2-0-0. Here’s a look at Monday’s action.

“Tonight, we just stuck to the game plan – got pucks in deep, won our battles, finished our checks and used our speed to our advantage,” Dylan Cozens noted following the victory. “Last game we were a little off, but today we focused on what we needed to do. Missing two top players, we felt like we had to battle harder and so that’s what we did, I’m really proud of our team today and how we stepped up.”

UNITED STATES 4 – CANADA WHITE 3 – OT
Mississauga Steelheads draft selection Trevor Zegras scored on a 2-on-1 2:45 into overtime as the United States narrowly defeated Team Canada White by a score of 4-3. Canada White surrendered a 3-1 lead in the third period as U.S. goals from Cam York and Jack Hughes knotted the game at three to force overtime. Nathan Legare (Baie-Comeau Drakkar), Logan Barlage (Swift Current Broncos) and Jakob Pelletier (Moncton Wildcats) provided Canada goals while Jonathan Lemieux (Val-d’Or Foreurs) made 36 saves in the loss. Canada White was outshot 40-22 as the United States improves to 2-0-0 in the tournament.

“Quite frankly, I don’t think a lot of people gave us a shot against the Americans and we gave them everything we had,” said Canada White coach Ryan Oulahen (Flint Firebirds) following the loss. “I thought we had control of the game, but there are things we can do better. From my experience, the biggest thing is that you want is the buy-in, the belief and compete level and that’s what we have with our group.”

RUSSIA 6 – FINLAND 4
Russia improved to 2-0-0 at the World Under-17 Hockey Challenge as Danil Guschin netted a hat-trick in a 6-4 victory over Finland. Vasily Podkolzin, Matvey Guskov and Ottawa 67’s draft pick Egor Afanasyev also scored for the Russians as they outshot Finland 35-30 and went 2-for-4 on the power play.

For news, stats and scores from the 2017 World Under-17 Hockey Challenge, visit hockeycanada.ca.