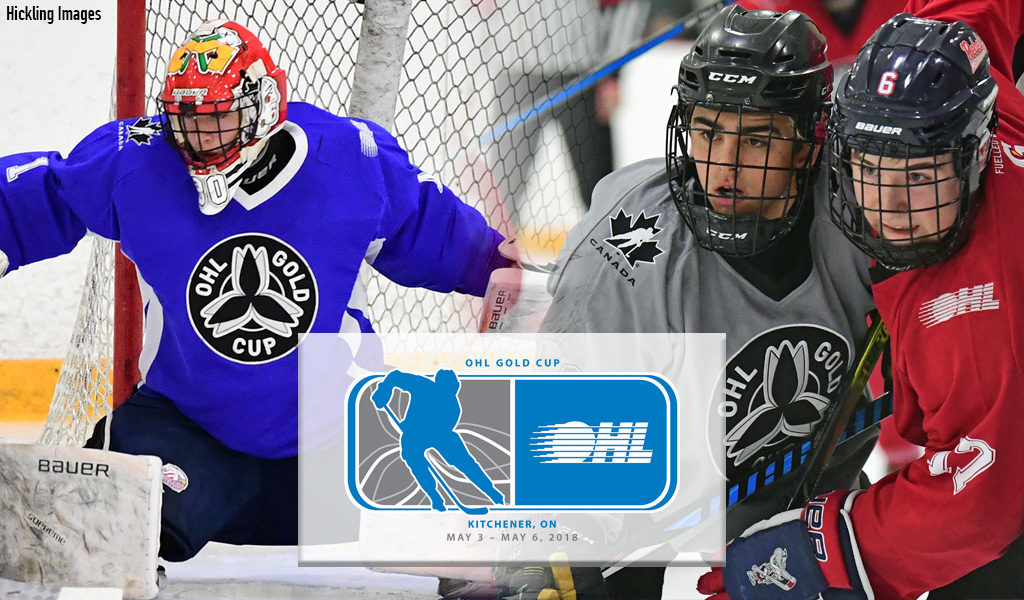 Team GTHL Blue, GTHL Red, HNO and NOHA were all winners to open the 2018 OHL Gold Cup at the Activa Sportsplex in Kitchener, Ont. on Thursday.

A total of 130 players chosen in April’s OHL Priority Selection are representing their respective minor hockey associations in the annual showcase event. Seven of those are Storm prospects.

Here’s a look at Thursday’s action.

Team OMHA White pressed hard in the third period but couldn’t overcome a 4-1 deficit, falling 5-2 to Team GTHL Blue behind a pair of goals from Reid Valade (KIT).

GTHL Blue defenceman Austin D’Orazio (BAR) chipped in with two assists in the victory as his club prevailed despite being outshot 29-21.

Cole Perfetti (SAG) scored what would stand as the game winner with 5:17 left in the third period as Team GTHL Red defeated Team ALLIANCE 3-1 in the second game of the day.

James Gray stopped 22 of the 23 shots that came his way as GTHL Red was propelled to victory by other goals from defenceman Nolan Dillingham-Morelli (SAR) and forward Riley Piercey (BAR) into the empty net.

Down 3-0 with the extra attacker on the ice, Joseph Serpa (KIT) ended Gray’s shutout bid, putting the ALLIANCE on the board with 3:17 to go in the third period.

After finishing at the bottom of the standings in each of the last several years, Team HNO is off to a running start at the 2018 OHL Gold Cup as American talent supplemented the attack in a 6-3 victory over Team HEO.

Sean McGurn (LDN) and Kyle McDonald (WSR) had a goal and an assist each to put HEO up 2-1 after one period, but HEO would storm in front in the second as goals from Jacob Perreault (SAR) and Dylan Winsor (KIT) put them in the lead for good.

Konner Kuuskivi also scored for HNO while goaltender Connor Lemieux made 25 saves to backstop his club to victory.

Team NOHA and Team OMHA Black saved the best for last on Thursday as Sudbury Minor Midget Wolves forward Gavin Brown stepped up with the overtime winner 1:40 into the extra frame for a 6-5 victory.

The back-and-forth affair saw NOHA come out on top behind two-goal performances from Brown and David Campbell (NB) while Giordano Biondi (SBY) joined Campbell with a three-point output.

Outshot 45-27, NOHA relied on strong goaltending from Reece Proulx (NB) who turned aside 40 shots in the win.

Down 3-2 after two periods, Hunter Brazier (OSH) joined Brown and Biondi with third period markers as the latter tied the score up at five with 3:24 remaining.

Ethan Cardwell (SAG) led the way offensively for OMHA Black with a pair of goals while other tallies came from Jacob Vreugdenhil (NIAG), Tyson Foerster (BAR) and Quinton Byfield (SBY). James Hardie (MISS) and Brody Waters (OS) both had a pair of assists in the loss.

The Storm prospects are back at it again today at the OHL Gold Cup.  Luka Profaca and Team GTHL Red take on Team NOHA at 3:45. Team Alliance with Ben McFarlane and Cooper Walker take on Team OMHA Black with Zack Terry, Ty Collins, Spencer Smith and Owen Bennett at 8:15pm.