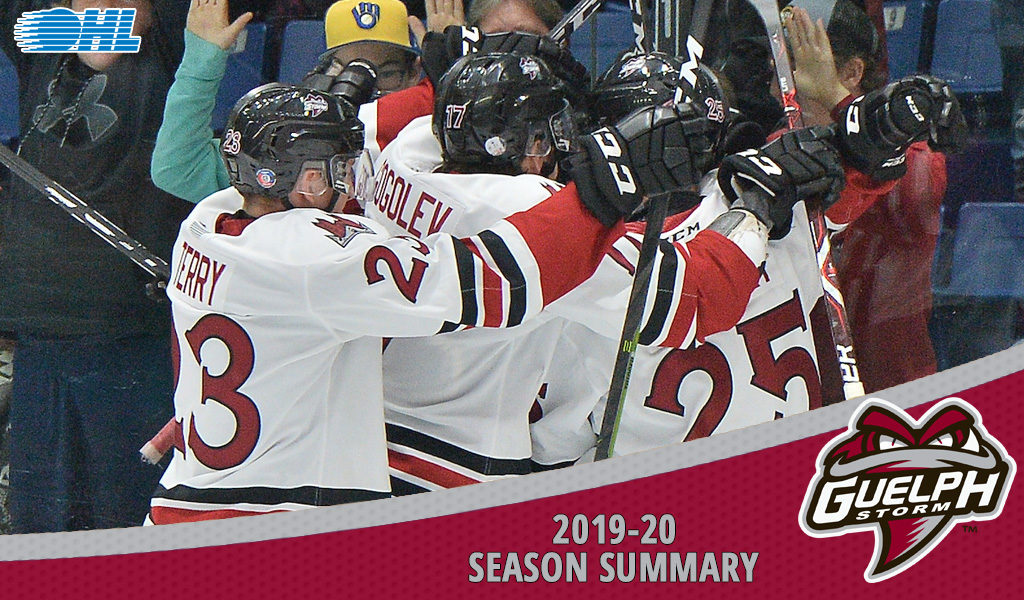 Coming off an OHL championship, the Guelph Storm embarked on the 2019-2020 season looking to defend. Their return to the ice saw respectable success initially with a record-setting winning streak in the first stretch. But in a tough division that neighbours the likes of the red hot London Knights and Kitchener Rangers, they proved unable to maintain their division lead, particularly after they ran into some injury problems. The Storm concluded the season in the Western Conference’s sixth place slot with highlights that included a tremendous performance in net from NHL Draft eligible Nico Daws and a couple of bounce-back stories.

Skidding high and low
While 10-game streaks aren’t necessarily rare, regardless of whether you’re on the losing or winning side, owning two of them in one season for better and for worse isn’t exactly a regular occurrence. This year, the Storm had the unusual experience of being on the end of two 10-game streaks, both on the winning and losing side. They saw victory over the first half the season and even sat atop the Midwest Division as a result. At the height of their success, they rode that 10-game win streak into late November with a reliable force between the pipes in Daws, who boasted league-high statistics among his fellow goaltenders. Eventually, their success at the top of the league standings wavered. The Storm would eventually hit a bout of adversity when the team returned from the Christmas break that was only amplified by an injured Daws, who had only recently returned from his World Juniors stint. They hit a 10-game losing skid as the month of January drew to a close, owning a 4-10-0-1 tally with a consistent four or more goals allowed in the majority of those games. Unable to match the Knights and Rangers, who both turned on the jets and remained strong especially over the second half of the season, the Storm finished third in the Midwest and sixth in the Eastern Conference, good for playoff contention that they unfortunately wouldn’t get to play out.

Daws stands tall
As seasoned netminder Anthony Popovich moved on to finish out his career with the Flint Firebirds, the reins were Nico Daws’ to take, and he carried the load admirably from the get go. His performance drew attention at both the NHL and international level. Daws suited up for 20 games over the Storm’s 2018-19 championship season and inevitably took on the starting goaltender role in his third year with the squad following Popovich’s departure. The 6-foot-4 netminder stood between the pipes for 38 appearances this season, having stepped away to compete with Team Canada at the World Juniors, and concluded the year with a second-best save percentage of .924 along with a fifth best goals-against average of 2.48. He was setback by injury that also disrupted his appearance at the Kubota CHL/NHL Top Prospects Game in mid January, and he was missed between the pipes as the Storm continued to slide in the same month. He ended the season with a 23-8-3-3 tally and a World Junior gold medal. He heads into the upcoming 2020 NHL Draft as the top ranked North American goalie prospect as per NHL Central Scouting.

Gogo leads the charge
After missing the majority of last season due to injury and, as a result, only suiting up for eight games in a Storm uniform ahead of the playoffs, fourth year OHLer Pavel Gogolev was back in full form as the team’s leading offensive producer. The 6-foot-1 forward, dealt to the club last season from the cross-conference Petes, capped off the year sixth in league scoring with a career high 96-point production. He also boasted a fourth best 45-goal total, which is a feat he shared with Oshawa Generals overager Brett Neumann.

Hillis bounces back
Centering the first line alongside Gogolev and Eric Uba (who notched a respectable 29 goals over the campaign), Cam Hillis’ bounce-back season also did not go unnoticed. The Montreal Canadiens prospect was sidelined multiple times during the regular season of his sophomore year and most of his team’s successful playoff run, only suiting up for 33 games over that time. The 19-year-old bounced back for the 2019-20 season, standing out with an 83-point showing, which was good for second in Guelph scoring and 13th in the league. He was also good for the second most (794) faceoff wins among all OHL skaters, received recognition as this year’s Red Tilson Trophy nominee, and following the end to the season, announced his newly launched Hillis Foundation initiative aimed at raising money for Canadian Tire’s Jumpstart program while inspiring kids through sport.

Milestones for bench boss Burnett
With an OHL championship under his belt, head coach and general manager George Burnett finished off the season having entered the record book on more than one occasion. He joined an exclusive group when he coached his 1500th career game on Dec. 28, becoming the fifth coach in OHL history to reach the milestone. Months later in March, he’d earn his 738th career victory as an OHL coach – a stint that has seen him behind the bench for the Niagara Falls Thunder, Oshawa Generals, Belleville Bulls and Hamilton Bulldogs beforehand – and in doing so, he climbed to fourth on the league’s all-time wins list.