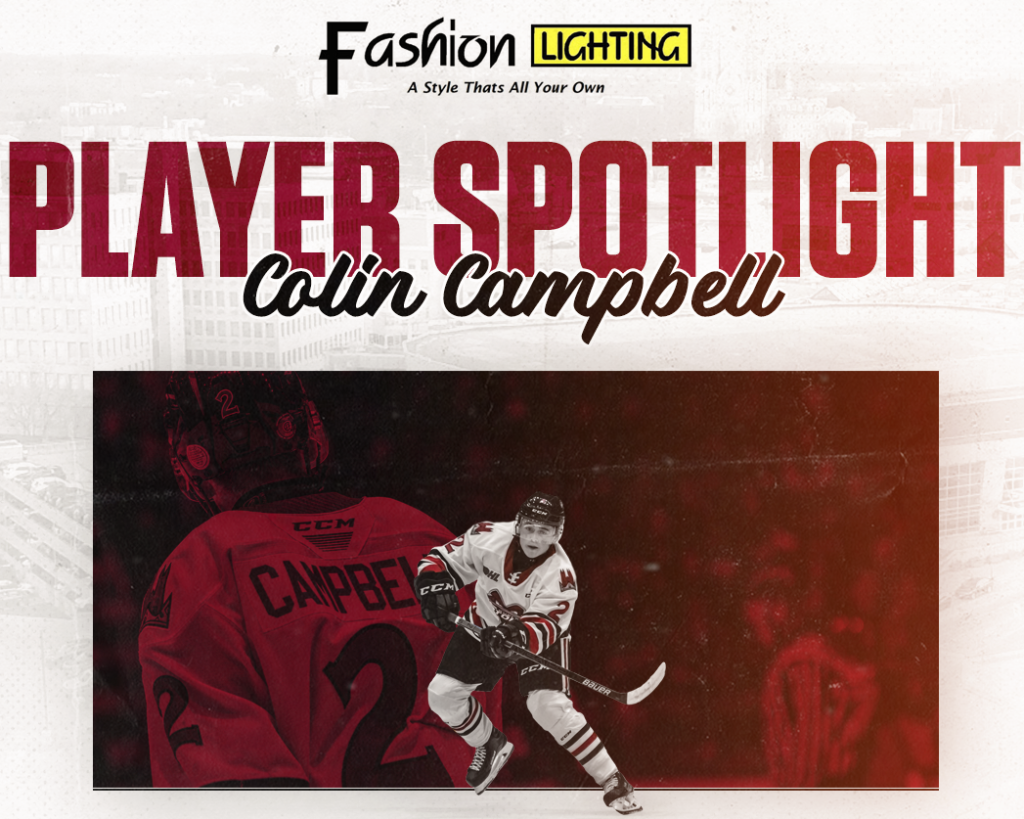 If someone tried to gamble on what makes a hockey player, there really would not be one clear answer.

For some players, success on the ice feels pre-determined from the moment they strapped on skates, and for their teams, it can feel like hitting the jackpot every time they lace up their skates. For Colin Campbell, as a five-foot-nine defenceman, moving up in hockey has meant both fighting against the odds and having people in his corner willing to bet on him as the long shot.

Like so many other young kids, the push to get on the ice came from Campbell’s family. His dad, Thane played U SPORTS hockey in the 1980s for the UPEI Panthers and the Dalhousie Tigers while earning his law degree before becoming an NHL player agent. In Campbell’s mind, his dad’s appreciation of how hockey could connect people helped inspire him towards the ice.

“My dad had played hockey, and he always said he wanted us to be in hockey so we could meet people,” said Campbell. “I’ve been playing since I was four or five years old, and I think it’s just getting into the sport to get to learn from other people, you know, learn about teamwork.”

Growing up in Mississauga, Ontario, like so many other kids, Campbell supported the Maple Leafs, but he also took a different, unique approach to who he cheered for. “I really like Jared Spurgeon, Torey Krug; you know I’ve always liked cheering for the guys who are the smaller defenders like me.”

Undersized at just 5’6″ as a defender in his OHL draft year in 2017, Campbell went undrafted following his U16 season with the Vaughan Kings. Rather than give up, he took a different route and grew both on and off the ice. He spent the following two seasons with the Mississauga Rebels U18 program of the GTHL while also getting into a pair of games for the Summerside West Capitals of the MJAHL and adding three inches to his frame to reach his height of 5’9″.

Even with his commitment to the game remaining strong, Campbell completed his second season with the Rebels in 2018-2019, unsure of the next phase of his hockey career, until he received an invitation to the Storm’s training camp that fall. “I really wanted to go to a camp, I didn’t actually think it would be possible, and when I got the invite to Guelph’s camp, I remember just being so excited.”

Entering his first OHL training camp in the fall of 2019, Campbell made a strong impression with three assists in five games, including a two-assist game in a mid-September 4-2 preseason win over the Hamilton Bulldogs.

Despite the positive showing, the defender’s expectations were low about whether he would get a contract. “Going to camp as a free agent, you hope to make the team, but you don’t really think it’s possible, so when George reached out and told me I couldn’t believe it, it didn’t feel real, to be honest.”

The dream became official on September 27th, 2019, when at 18-years-old, Campbell put on his #2 jersey and stepped on the ice at the Sleeman Centre to line up against the Owen Sound Attack.

“My first OHL game was against Owen Sound, and I just remember getting on the ice, looking at it, seeing all of the fans, and I couldn’t believe it because it was something I never thought would ever happen. I still am speechless to this day.”

Campbell played in 23 games for the Storm through the 2019-20 season, picking up his first OHL point to assist on Marko Sikic’s first OHL goal against the North Bay Battalion on October 25th. Reflecting on it, the now 20-year-old is thankful to his teammates for helping ease his transition to the next level. “Coming from U18, making the jump, I wasn’t sure if I would be able to hold up, but I just learned from other people, and all the guys are so great; they helped me out.”

From January 2020, until the season ended Campbell dressed in just three games for the Storm. Being out of the lineup as a rookie could be frustrating for a young athlete, but for Campbell, he relished the opportunities off the ice as opportunities to learn. “I know I didn’t play as much as some guys, but for me, I was able to watch players and study players around the league. If I wasn’t playing, I went up and took notes and watched the D around the league to see what they were doing to try and add that to my game.”

Now at 20-years-old, Campbell will head into his next season with the Storm as one of the team’s older players despite having limited OHL experience. Still, he knows he is ready to take on the challenge of helping the next generation of the Guelph Storm. “We are going to have a young roster probably, so my goal is just to be a good team guy, helping out the younger guys and doing whatever it takes to win.”

While he waits, he’s been staying out on Prince Edward Island and spending some time with a familiar team. “I have been skating on the ice with the UPEI men’s hockey team, working out in the gym, doing some running, and also taking some courses at the University of Guelph.”

For the undersized kid from Mississauga, after fighting every step to get where he is, when he finally gets the chance to get back on the ice for the Storm, the mission is pretty simple. “I want to work hard for everyone who gave me the opportunity to play for this team and make them know they didn’t make a mistake.”