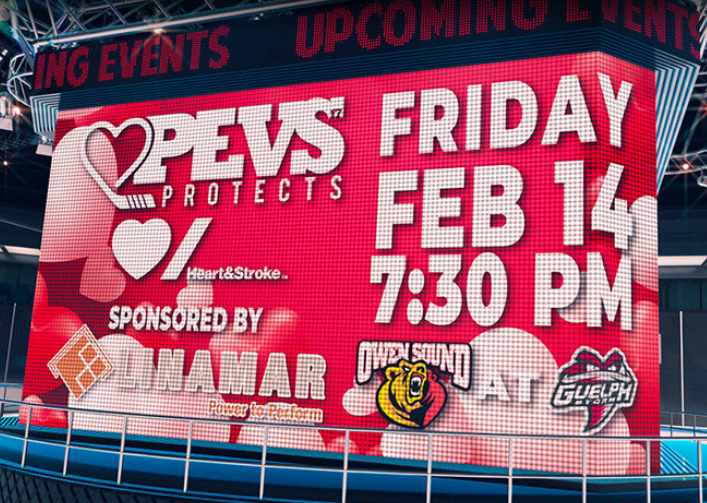 The Guelph Storm are proud to announce that they will host their 5th Annual ‘PEVS PROTECTS Night’ presented by Linamar on Friday, February 14, 2020, when the Storm take on divisional rivals, the Owen Sound Attack at 7:30 pm at the Sleeman Centre. In the first four years, Storm fans have helped raise over $50,000.

For tickets to Friday night’s game visit the Storm Box Office, order by phone 1-888-STORM-GO or by clicking here!

PEVS PROTECTS was developed by former National Hockey League forward and Guelph, Ontario native Rich Peverley, and his family, in partnership with the Heart and Stroke foundation. The partnership aims to raise awareness and funds for AED purchases and CPR training right here in Guelph.

On Valentine’s Day, February 14, volunteers will be on hand inside Gate 6 of the Sleeman Centre collecting donations in support of PEVS PROTECTS and the Heart and Stroke Foundation. Information tables and a CPR and AED demonstration area will also be a part of the game night.

The chuck-a-puck fundraiser will be held during the second intermission, prizes include an Alexander Radulov autographed Authentic Dallas Stars Jersey, a Tuukka Rask autographed authentic Boston Bruins jersey and a Danby Fridge.

Born and raised in Guelph, Peverley played minor hockey for the Guelph Reps.  Rich spent eight seasons in the NHL as a member of the Nashville Predators, Atlanta Thrashers, Dallas Stars and Boston Bruins, where he was part of the 2011 Stanley Cup Champions.

On March 10, 2014, Peverley suffered a severe cardiac incident that led to his collapse on the bench in a game against the Columbus Blue Jackets. His cardiac arrest incident ultimately led to his retirement from playing professional hockey at the age of 31.