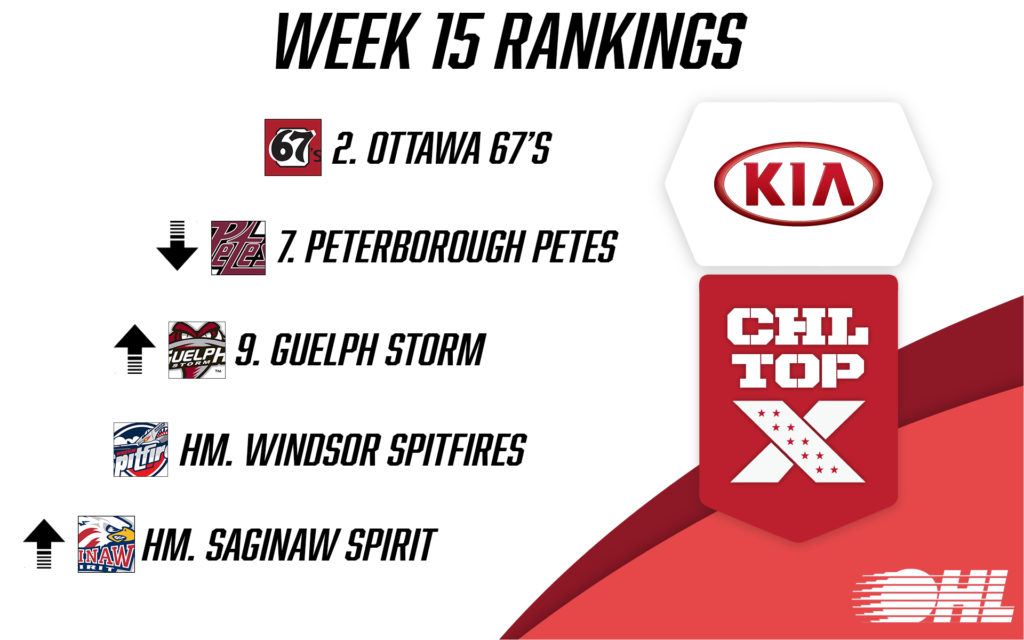 Toronto, ON – The Canadian Hockey League today announced the week 15 edition of the Kia CHL Top-10 Rankings for the 2019-20 season.  The weekly rankings of the CHL’s Top-10 teams are selected by a panel of National Hockey League scouts.

The Ottawa 67’s hold down the second spot on the weekly rankings, coming out of a New Year’s Day victory over the Oshawa Generals as winners of a franchise record-tying 14 straight games. Ottawa’s dynamic offence is powered by OHL scoring leader Marco Rossi who has teamed up with diminutive overage forward Joseph Garreffa in the nation’s capital. Both players are on lengthy point streaks, with Rossi leading the OHL with 63 (23-40–63) over just 27 games. The Barber Poles also feature the League’s top scorer among defencemen in overage veteran Noel Hoefenmayer who has 49 points (15-34–49) over 33 contests.

The Peterborough Petes fall to seventh on the list following consecutive losses to other Top 10 teams in Ottawa and Guelph. The Petes bounced back on New Year’s Eve as rookie Mason McTavish put up a career-high five-point performance in a 7-3 road win over the Niagara IceDogs. The Petes are led in scoring by Toronto Maple Leafs prospect Semyon Der-Arguchintsev with 47 points (4-43–47) while blueliner Declan Chisholm follows close behind with 44 points (7-37–44) in 35 games. They remain without the services of Toronto prospect Nick Robertson (23-12–35) who is off representing the United States at the World Juniors.

The defending OHL champion Guelph Storm have been one of the big stories of the first half of the OHL season. Despite a big graduating class, the Storm have managed to rise to the top of the Midwest Division with a 21-8-1-4 record and are the ninth-ranked team in the CHL this week. Veteran winger Pavel Gogolev has a goal in nine consecutive games while goaltender Nico Daws, who is off representing Canada at the World Juniors, has been the OHL’s best netminder statistically in 2019-20.

The Windsor Spitfires and Saginaw Spirit, who have won six straight, both received honourable mentions this week. 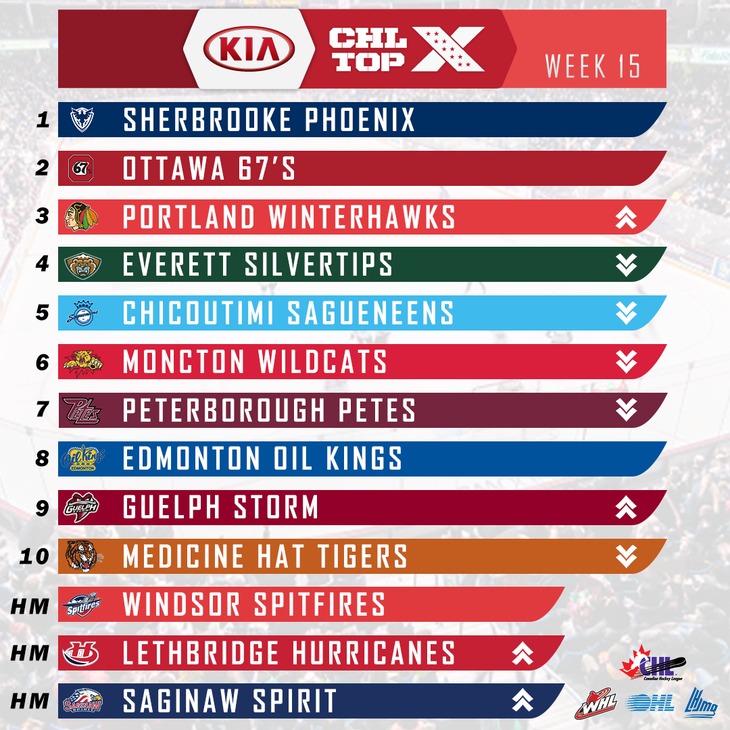