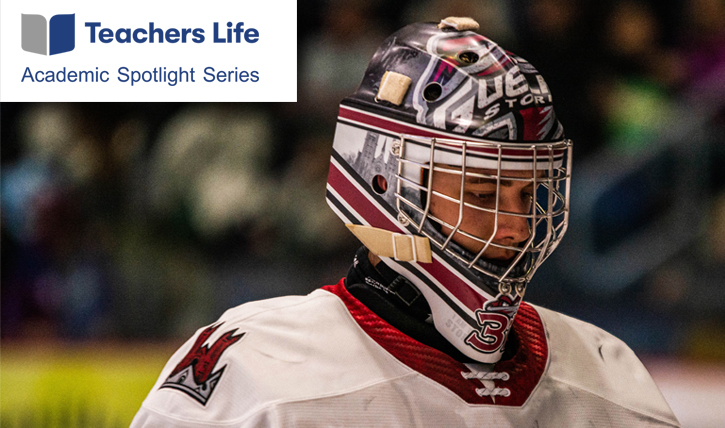 As he waits for January and the opportunity to return to the ice, the time away has given Owen Bennett the chance to focus on his second passion. After graduating high school following his rookie season Bennett has enrolled in studying Mechanical Engineering at the University of Guelph.

According to Bennett, growing up he always had a passion for engineering. “I always loved building things, if we were out in the yard raking leaves I’d be grabbing card board and trying to build something to make it faster and easier” he says, “That building and designing mentality has been something that has come naturally to me.”

When talking about the sciences, Bennett’s passion for learning really comes out. “My favourite subjects are Chemistry or Physics, they are hard but the principles you learn I have found to be fascinating.” Overall across his six advanced Grade 12 classes Bennett’s work in the classroom helped him to keep a 94% average.

It was not always easy, Bennett played in 27 games during his rookie campaign for the Storm and learned very quickly the difficulty of balancing, playing hockey, keeping up with his studies and just being a 17-year-old. “There are definitely times where you want to go out and do things with your buddies and that can’t always be the case” he says, “You’re sitting on the bus for the eight-and-a-half-hour drive to Sault St. Marie or the five-hour drive back from Saginaw and it’s just having the dedication to bring your school bag and fit your studying in wherever you can.”

Bennett knows his goal is to one day play professionally but he also understands the value of a good education along with sports. “As a hockey player, it is definitely easy to believe that you are going to be playing pro, and while that is obviously the goal, you cannot lose sight of the fact that if hockey does not end up working out you can still have the opportunity to do something you love.”

His strong academic performance was rewarded back in April when he was named the Storm’s 2019-2020 Paul Fendley Memorial Scholastic Player of the Year, making him Guelph’s representative on the OHL Scholastic Team. “It felt really good to have that appreciation of the hard work that goes into applying yourself,” he says.“To have my name be next to some of the people that have won the same award in the past and also to be nominated for the Bobby Smith Trophy (OHL Scholastic Player of the Year), it just feels really good to have my name be put in that area.”

“Teachers Life are proud sponsors of the OHL’s Academic Spotlight Program,” says Doug Baker, President and CEO of Teachers Life. “The dedication of the OHL’s student-athletes to their education mirrors Teachers Life’s commitment to students and educators across the province. By celebrating these athletes, they become role models to kids in their communities through their dedication to academic excellence, integrity and curiosity.”

Now entering his sophomore season, Bennett hopes to serve as a role model both on and off the ice and has some words of wisdom for the next generation of OHL talent. “Stay Focused, you are going to be tempted to not do that night of studying or to wing it on that presentation, but you are not going to want to look back and say you should have done more.”

“Enjoy it, it is an exciting time but make sure you stay focused.”

Teacher’s Life are proud sponsors of the OHL’s Academic Spotlight Program says Doug Baker, President and CEO of Teachers Life. “The dedication of the OHL’s student-athletes to their education mirrors Teachers Life’s commitment to students and educators across the province. By celebrating these athletes, they become role models to kids in their communities through their dedication to academic excellence, integrity and curiosity.”

About the Ontario Hockey League