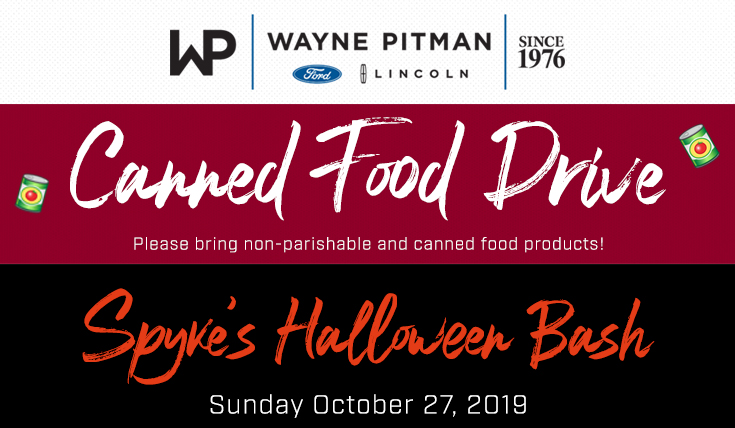 Sunday’s game between the Storm and the Mississauga Steelheads is Brent Johnson of Wayne Pittman Ford’s annual Food Drive in support of the Guelph Food Bank and Spyke’s annual “Halloween Bash”.

If donating non-perishable food items, volunteers will be on hand to collect your much needed food items or cash donations in support of the Guelph Food Bank.

Last year with all that was collected, along with some cash donations over 1,700 meals were provided for the Guelph Food Bank.

Spyke is reminding young Storm fans attending the game to JOIN HIM in wearing a Halloween costume!

Kids in costume are invited to do Trick or Treating throughout the Sleeman Centre during the game with Halloween candy available at Spyke’s Sports outside Gate 6, Spyke’s Shop on the arena concourse behind section 115, the Guelph Storm information table, plus the Storm box office and the Sleeman Centre box office.

PLUS… during the second intermission, mascots Spyke and Stormy will be leading the HalloweenParade across the ice with more treats for fans in costume.

For fans attending the game and participating in the Halloween Parade, Spyke and the Storm Crew will meet parents and kids on the main concourse level at the top of SECTION 103 with six minutes remaining in the second period.

And finally, the person with the BEST COSTUME will be given a $50 gift card to Spyke’s Sports Shop!

Come on out to join Spyke for his Halloween Bash!!