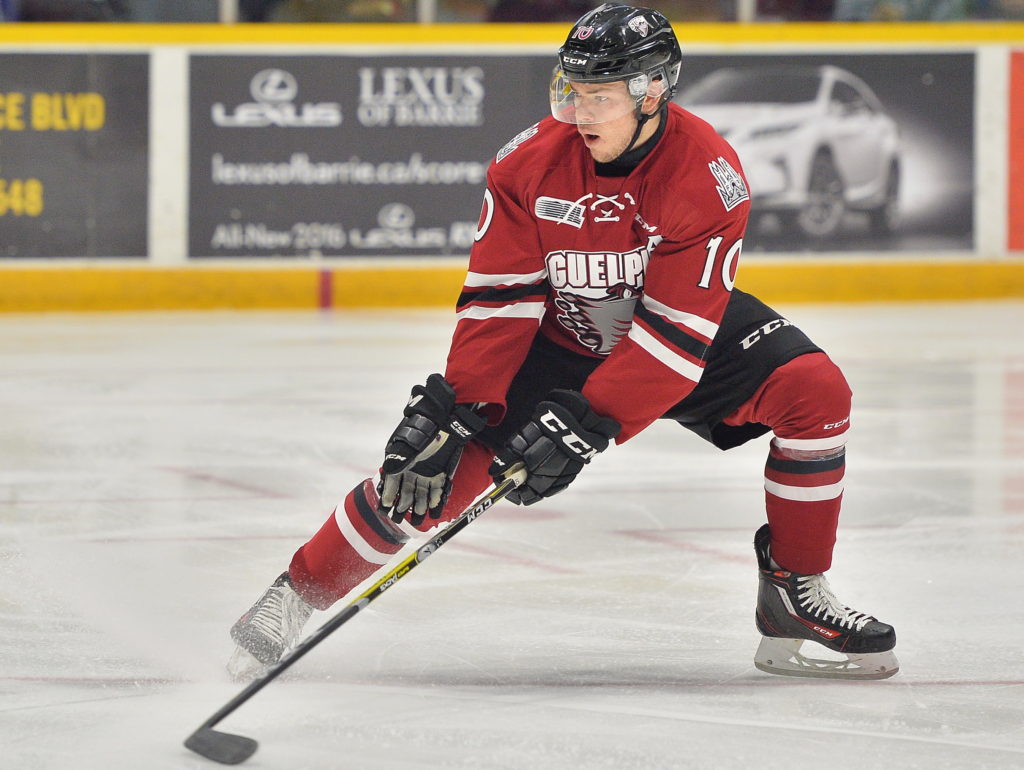 On Tuesday, March 21, Storm assistant captain Austin Hall announced his retirement from hockey due to a history of concussions.

“I would like to thank the Guelph Storm organization for an absolutely amazing three years, that I will never forget,” said Hall. “From top to bottom, the Storm is a world class organization that I’m very proud and lucky to be part of.”

Selected in the seventh round of the 2013 OHL Priority Selection, the Belle River, Ontario native was a mainstay on the Guelph Storm’s blue line for the past three seasons. During his time with the Storm, the defensive defenceman posted four goals and 18 assists for 22 points in 109 regular season games. Hall also appeared in nine playoff games during the 2014-15 season.

Most importantly, Hall was a revered leader both on and off the ice. In the 2013-14 season with the LaSalle Vipers of the Greater Ontario Junior Hockey League (GOJHL), Hall was named the recipient of the Mickey Renaud Award for dedication, determination and leadership on and off the ice.

“Thank you to my billets, the Muirs, who have really been a second family to me, and to all the friends that I’ve made throughout the way,” Hall added. “There are so many people that have made this a great experience for me and I can’t thank them all enough, but with that said, I’m looking forward to the next chapter in my life!”

“After a series of concussions over a short period of time, we applaud Austin’s maturity in making this very heart-wrenching decision,” Kelly said of Hall. “His decision is a significant loss to the Storm, but after long discussions with medical professionals, his family, and Storm staff, it is the right decision.”

“Anyone who has ever watched Austin play, knows his ‘motor is always running’ – I literally have not seen him take a shift off in his three-year tenure with the Storm,” Kelly continued. “Austin’s style of play was inspirational to his teammates, coaches, and fans. We were a much better team when we had Austin Hall in our lineup.”

A major supporter of community initiatives in Guelph, Hall served as a Booster Juice Ambassador during the 2016-17 season and took part in numerous school visits and other community events during his three years with the team, and was a co-recipient of this year’s Fay Scott Memorial Award for outstanding commitment to education and community.

Kelly went on to credit Hall for his ongoing commitment to education.

“As passionate as Austin is towards hockey, he is equally passionate about academics – he is a two-time recipient of the Storm’s Roger Neilson Memorial Award as the team’s top post-secondary student. He not only attends his university classes but loves the challenges of his Biological Science curriculum. Austin is an exceptional student who is capable of achieving any goal he sets his sights on.”

“While none of us know what the future holds, I truly hope that Austin gets involved in youth coaching sometime in the future. He would be an exceptional role model to young students and athletes,” Kelly offered.

“While Austin may not be on the ice with his teammates next year, Austin and his family will be part of the Storm family for life.”