Kirwin states his case for spot on Storm roster 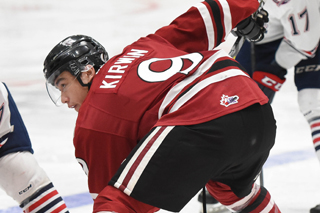 Barret Kirwin knew he was on the bubble for making the Guelph Storm this season.

he second-year player was one of a group of three or four forwards fighting it out for one of the few unspoken for spots on the team.

“I just came into camp with the mind set of playing my game and not worrying about what’s going on,” the Barrie native said. “There’s a lot of good talent on this team. There’s a lot of depth and a lot of youth.”

He worked hard in the off-season preparing for this camp, knowing he was going to have to earn a spot on the team. He was determined not to short-change himself at camp.

“I like to emphasize my defensive play. It’s defence first for me,” he said.

Kirwin, 17, who had five goals in 55 games last season, has four goals in four pre-season games this season. Two of them came Thursday night at the Sleeman Centre in a 3-2 overtime loss to the Hamilton Bulldogs: a tip in the high slot in the second period and a nice top-corner wrist shot in the third period.

“I’m a little bit surprised,” he said of the four pre-season goals. “Just getting some lucky bounces I guess.”

Kirwin’s two-way play certainly hasn’t been lost on the man making the decision as to who stays and who goes as camp winds down.

“He certainly is giving me a lot to think about, that’s for sure,” said Storm coach/general manager George Burnett. “He’s done a nice job. He works extremely hard and he’s been rewarded for his hard work. To see him score is terrific, I think that builds confidence.

“He’s not here because he’s going to lead the team in scoring, but he’s been rewarded for his hard work.:

Burnett said Kirwin’s coach in minor hockey told him Kirwin reminds him of a young Manny Malhotra, the former Storm and NHLer known for his solid two-way play and hockey smarts.