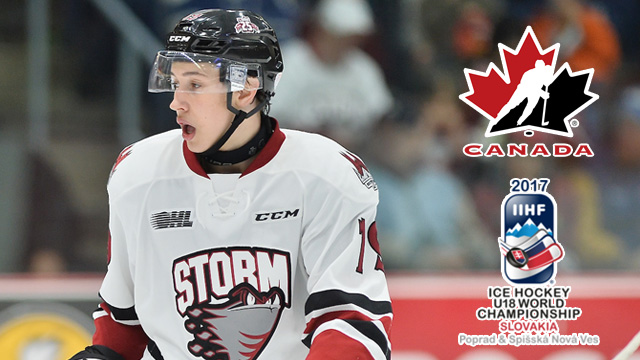 POPRAD, SLOVAKIA – 2017 NHL Draft prospect Stelio Mattheos (Brandon Wheat Kings) scored his second of the game 2:38 into overtime to break a 3-3 stalemate between Canada and host Slovakia, improving Canada to 1-1-0-0 at the event.

Up 3-1 after one period, the lead slipped away as Slovakia’s Adam Liska would score his second of the game shorthanded 2:38 into the third period to knot the score at three.

Ian Scott (Prince Albert Raiders) made 26 saves to force overtime before Mattheos stepped up with his second of the game to give Canada the win before a crowd of 4,381 in Poprad.

Draft eligible forward Adam Ruzicka (Sarnia Sting) had an assist in the loss for Slovakia as they were outshot 36-29 and fall to 0-0-1-1 in the preliminary round.

Canada sits behind Finland for second place in Group A sporting a 1-1-0-0 mark. The IIHF awards three points for a regulation win and two points for an overtime win.

Canada returns to action on Monday against Switzerland.

Prior to the game Hockey Canada announced that defenceman David Noel of the Val-d’Or Foreurs was added to the roster along with forward Cody Glass of the Portland Winterhawks.