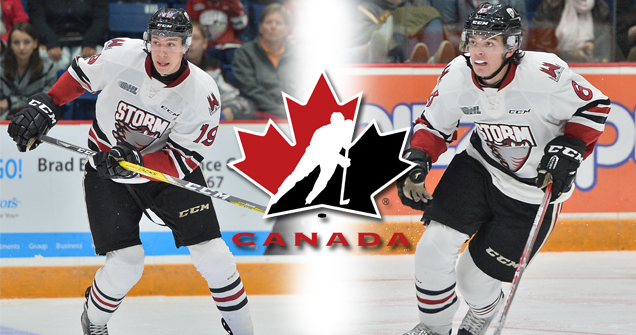 ETOBICOKE, Ont. – Canada’s National Men’s Under-18 Team will begin to assemble in Etobicoke, Ont., this week before flying to Slovakia for two pre-competition games in preparation for the 2017 IIHF U18 World Championship, April 13-23, in Poprad and Spisska Nova Ves, Slovakia.

Hockey Canada is grateful for the support of its junior hockey partners, led by the Canadian Hockey League (CHL), in helping provide this development opportunity and international experience for these young players.

“We felt it was important to start putting the pieces together and having the players on the ice as we assemble and start building a strong base for the group that will eventually be the one to wear the red-and-white at this year’s U18 world championship,” said Ryan Jankowski, Hockey Canada’s director of player personnel. Jankowski is responsible for leading the player selection process, with input from head coach Darren Rumble (Barrie, Ont./Moncton, QMJHL), assistant coaches Steve Hamilton (Edmonton/Edmonton, WHL) and Stéphane Julien (Shawinigan, Que./Sherbrooke, QMJHL), and goaltending consultant Fred Brathwaite (Ottawa/Hockey Canada).

“As players progress through the CHL playoffs, we will be making additions to our roster with the goal of playing for gold at worlds.”

Players will hit the ice for three practices at the MasterCard Centre’s Rink 1 during their time in Etobicoke – all practices are open to the public and free of charge:

On April 5, the team departs for Slovakia to continue its training camp and play two pre-tournament games – April 9 in Bratislava versus Russia; and April 10 in Piestany versus Switzerland.

Canada opens the 2017 IIHF U18 World Championship on April 13 against Latvia; it will also play Finland, Slovakia and Switzerland in preliminary-round action. TSN, the official broadcast partner of Hockey Canada, is broadcasting 12 games, including all of Team Canada’s match-ups at the IIHF U18 World Championship. RDS will broadcast 10 games, including Canada’s four preliminary-round games, two quarter-final games, both semifinals, and the bronze- and gold-medal games.