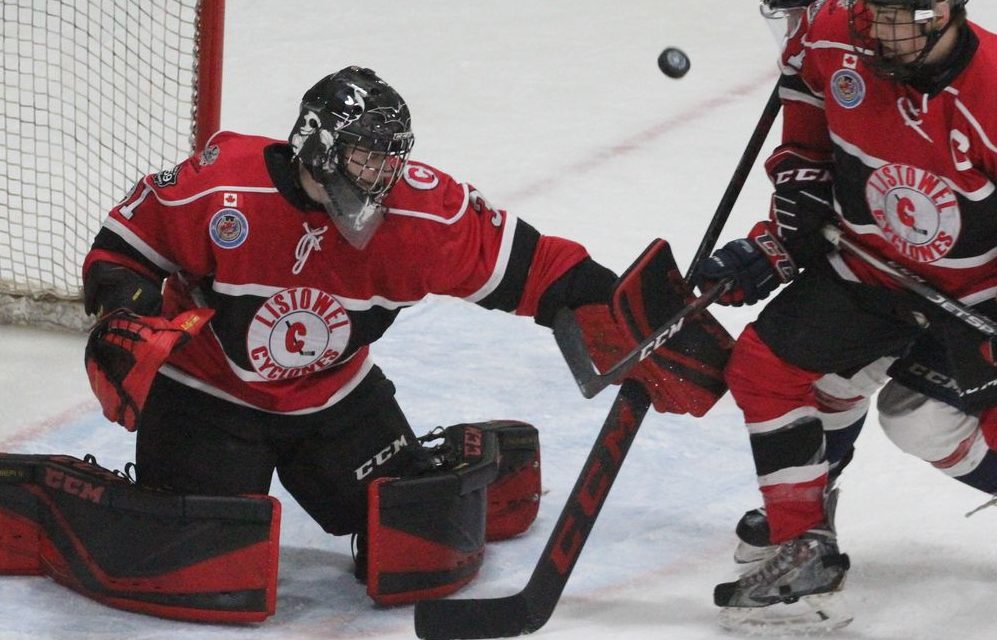 by Cory Smith, The Beacon Harold

If his six-foot-three frame wasn’t enough, Dixon Grimes needed 120 minutes to get the attention of his Listowel Cyclones’ teammates and coaches.

In two games, the rookie netminder stopped 55 of 58 shots in wins over Caledonia and Chatham to start a 2019-20 Greater Ontario Junior Hockey League season that ended with Grimes being named one of the Ontario Hockey Association’s top prospects.

“He exceeded expectations,” Cyclones head coach Jesse Cole said. “We knew coming in we had a good goalie in him.”

Grimes made the jump from triple-A to junior B after a season with the Guelph U16 Gryphons. The plan was to ease him into his new surroundings, but that changed after veteran Evan Morrison stuck around OHL Flint thanks to an injury to one of the Firebirds’ goaltenders.

Grimes didn’t look like a 16-year-old as he won six of eight starts in September — allowing more than two goals just once — and was named the Midwestern Conference’s top goalie that month.

“He gave us that chance and rolled with it,” Cole said. “As a team, (players) thought we had strong chance to win with him in net. He was consistent throughout the year. You could talk to him and think he’s a 20-year-old … and at 16 that (helped) him have the success he had — his mentality and the way he approached it, and he took ownership.”

Grimes used his six-foot-three, 208-pound body to his advantage, cutting down angles and moving around the crease with the kind of efficiency that might have escaped some taller goalies still growing into their bodies at a young age.