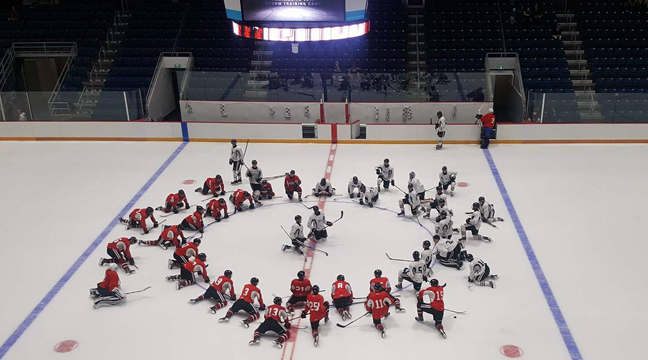 The Guelph Storm opened Day Three of the 2017 Training Camp with their third scrimmage of the week, featuring Team White vs. Team with different rosters from Day 2.

Team White jumped to an early lead, as Alexei Toropchenko scored from in tight.

As the first period came to a close, Rewdy Scott fired a wrist shot from the point to give Team White a 2-1 lead heading into the first intermission.

Team Red got off to a quick start in the second period, as Stevenson scored his second of the game to even the score at 2-2.

The score would remain tied until late in the period, when Cedric Ralph beat Nico Daws to give Team White the 3-2 lead heading into the third period.

Early on in the third period it was all Team Red as Liam Hawel tied that game, just 20-seconds into the period.

Continuing to mount pressure, Dmitri Samorukov stepped up and rifled a wrist shot home to give Team Red their first lead.

With just over 10-minutes left in the final frame, Team White continued to fight back, scoring three quick goals from Garrett McFadden, Cam Hillis and Toropchenko, taking back the one-goal lead.

In the dying moments of the final frame, Primeau scored his second goal to tie the game.

Neither team would be able break the tie and game three would finish in a 6-6 tie.

Anthony Popovich (opening 30-minutes) and Nico Daws (closing 30-minutes) manned the goal for Team Red, while Richard Ledek (1st Period), James Walker (2nd Period) and Nick Haas (3rd Period) were between the pipes for Team White.
The next scrimmage between Team Red and Team White during Storm Training Camp takes place today Wednesday, August 30th at 6:00 pm at The Sleeman Centre. All Training Camp scrimmages are open to the public and free to attend.
The Storm kick off their preseason schedule with a road game on Friday, September 1, and make their home debut on Monday, September 4, followed by home games on Thursday, September 14 and Saturday, September 16, for tickets, click here.
The Storm open the 2017-18 regular season on Friday, September 22nd when they host the visiting Sarnia Sting at 7:30 pm. Tickets to all Storm 2017-18 regular season home games are on sale now and can be purchased online here, in person at the Guelph Storm Box Office located at the Old Quebec St. Shoppes, by phone 519-837-9690.