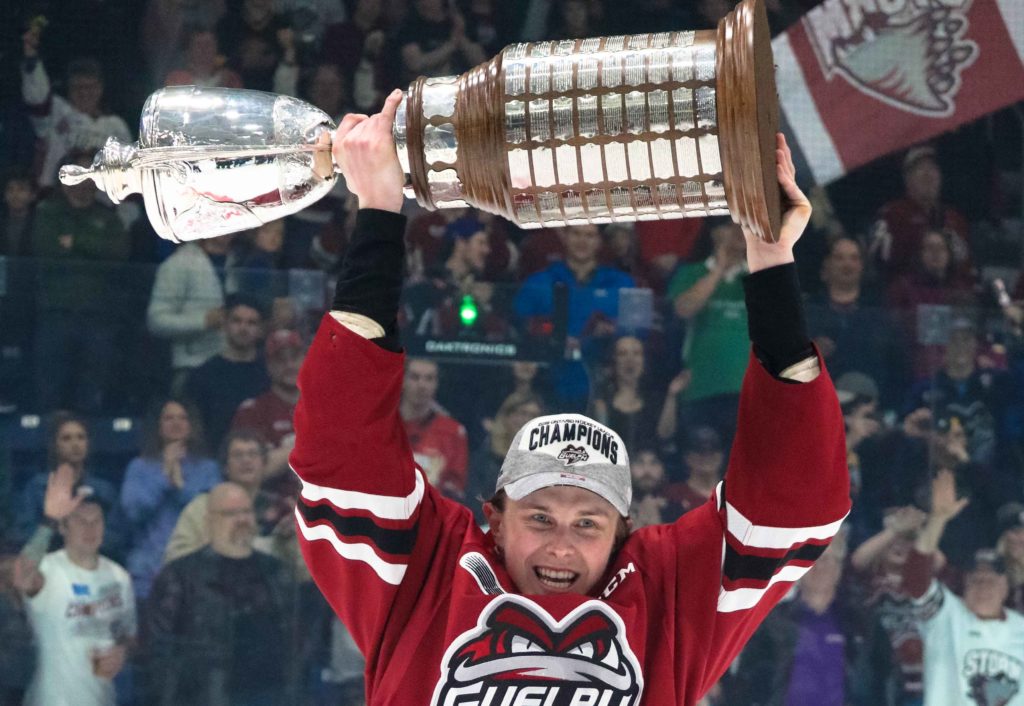 By Travis Hall, AHL On The Beat

The past week has been one that MacKenzie Entwistle will never forget.

The rookie netted his first professional goal and was named first star of the game on Oct. 30 after his multi-point effort helped the Rockford IceHogs down their divisional foe, the San Antonio Rampage.

In typical MacKenzie Entwistle fashion, though, his sentiment was that of appreciation for all those who helped him achieve the milestone.

“It’s obviously the result of a lot of hard work and dedication not only from me but from a lot of people: my teammates, my coaches, my parents and my family,” he said. “It was special to get that one.”

And it didn’t take the 20-year-old long to again etch his name on the scoresheet, as he found twine on Nov. 3 against the Chicago Wolves for his second marker in three games.

Entwistle credits the recent success to an ongoing growth in his confidence.

“Obviously it’s a big jump from juniors; you’re playing with bigger and stronger guys and everyone is really good at this level,” he said. “Once you kind of get used to the game and realize you don’t have three or four seconds with the puck and that you’re down to one or half a second — I’m starting to realize that and implement that in my game. I’m feeling a little stronger and more confident and comfortable out there.”

Entwistle points to his fellow members of the IceHogs as helping usher him into the professional ranks and helping him post four points in eight games since his debut in October.

“Kinger (head coach Derek King) has been really good, and then Highsy (Matthew Highmore), Steeger (Kris Versteeg) and Tyler Sikura have helped me and guided me through the first couple games here,” Entwistle said. “If there’s anything I need, they’re there. Just working on some video and seeing what things I can improve on the ice or even off the ice, so they’ve been awesome in helping me improve as a player.”

Versteeg, a two-time Stanley Cup champion, heard about Entwistle’s comments and provided his own take on just how much he thinks the Mississauga, Ontario, native is capable of.

“He’s a great player,” Versteeg said. “He’s smart, he’s lanky, he competes and he’s a player that, if he can figure out a couple things, could play in the NHL. So, I think he’s a guy that’s definitely on the rise, and he wants to be really good, which is exciting.”