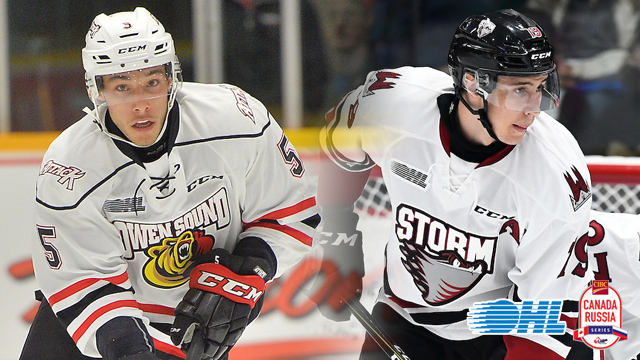 Sudbury, ON – The Ontario Hockey League, in association with the Canadian Hockey League, today announced that defenceman Sean Durzi of the Owen Sound Attack and forward Isaac Ratcliffe of the Guelph Storm have been added to Team OHL’s roster for Game 4 of the 2017 CIBC Canada Russia Series, scheduled for Monday November 13 in Sudbury.

Ratcliffe replaces Storm teammate Givani Smith who is unable to compete due to injury, while the addition of Durzi provides Team OHL with six defencemen for Monday’s game.

Additional roster notes for Game 4 include the addition of Owen Tippett of the Mississauga Steelheads who competed for Team OHL in Thursday’s Game 3, and the confirmation that Jonah Gadjovich of the Owen Sound Attack will play after missing Game 3 due to injury.

Durzi, a 19-year-old from Mississauga, leads all OHL defencemen in scoring with 30 points in 18 games including 11 goals and 19 assists.  The OHL’s Defenceman of the Month for October was a free agent invite to New York Islanders rookie camp in September and will make his Team OHL debut on Monday.

Ratcliffe, an 18-year-old from London, was a second round pick of the Philadelphia Flyers in the 2017 NHL Draft.  Through 18 games of the 2017-18 campaign, the forward has produced eight goals and six assists for 14 points with the Storm after signing his entry-level contract with the Flyers in August.  He will also be competing in his first CIBC Canada Russia Series on Monday.

At the midway mark of the 2017 CIBC Canada Russia Series, Team Russia holds a 6-3 lead in points after splitting games in the Western Hockey League and following a 5-2 victory over Team OHL on Thursday night in Owen Sound.  Team OHL carries an all-time record of 23-5-1 in Canada Russia Series action.

All games of the 2017 CIBC Canada Russia Series will be available online through NeuLion’s CHL streaming platform at http://chl.neulion.com/chl/.

All games of the 2017 CIBC Canada Russia Series will also be broadcast on the NHL Network U.S the following day at 10:00 am Eastern.

The 2017 CIBC Canada Russia Series is supported by title sponsor CIBC, the Official Bank of the CHL, along with associate sponsors Cooper Tires and Sherwin-Williams.