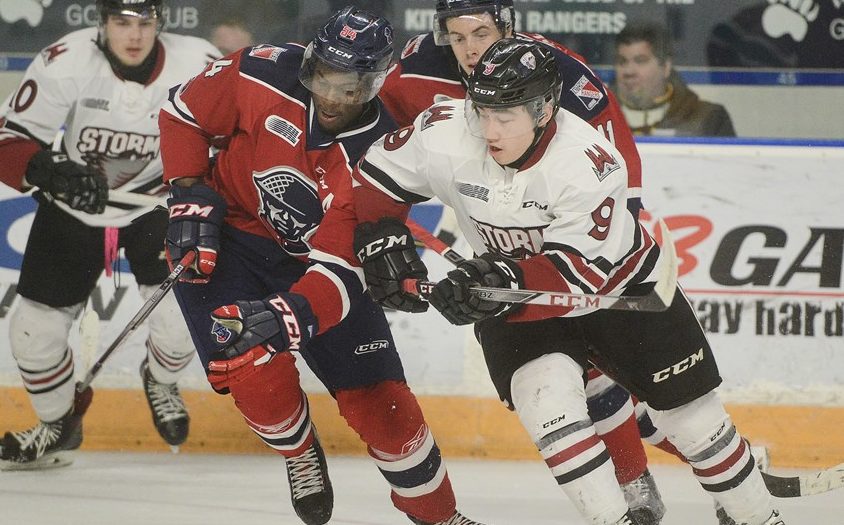 Another game in his new team’s schedule, but the first one against his former teammates.

Smith, traded by the Guelph Storm to the Kitchener Rangers at the trade deadline for three second round draft picks, had a goal and an assist Sunday to help his new team beat Guelph 4-2 at The Aud.

“Just another game,” said Smith, who played 187 games in a Storm jersey.

“It’s nice seeing the guys I used to play with just a couple of weeks ago, but for me it’s just a hockey game.

He did have a ‘Guelph moment,’ when Isaac Ratcliffe scored for Guelph in the third period.

“When Ratcliffe scored and you hear the name on the board, you think ‘oh, we just scored,’ but it’s the other team that scored,” Smith said.

Smith hammered one home on a one timer from the slot in the second period then almost scored on a breakaway in the third, picking up an assist when teammate Eric Guest poked home the rebound.

He was also willing to mix it up physically with his old teammates.

“I’ve to to play it hard. I’m a physical player and I’m not going to let up on certain players that I know. I play a physical game out there and that’s what I’m here to do,” Smith said.

Smith said there is a noticeable difference to the vibe in the Rangers dressing room than the one he was used to in Guelph.

“Yeah. A real different vibe. It’s a bunch of older guys, drafted guys and signed guys, and we’ve all been to pro camps and played pro games. It’s like an NHL atmosphere,” Smith said.