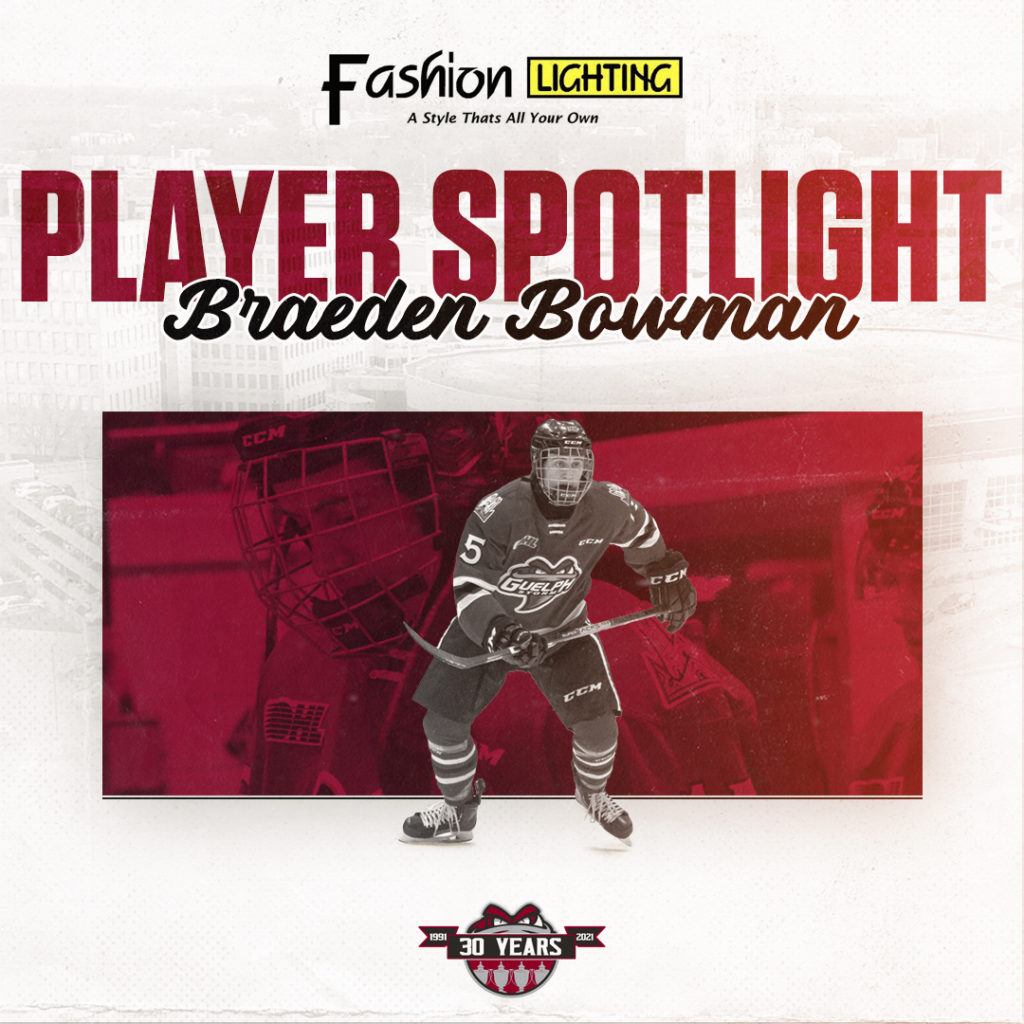 Last season, Braeden Bowman saw his friend and fellow rookie teammate Marko Sikic make the jump full-time into the Storm lineup. When the new season kicks off in February, Bowman is ready to join him, and carve out a place for himself on the Storm.

As a youngster, Bowman had season tickets to the Kitchener Rangers, giving him a front-row seat to the heated matchups between the Rangers and Storm. “Just watching when I was younger and seeing the work ethic and the excitement when you win just pushes me to work as hard as I can to get to the next level.”

Bowman’s minor hockey career took him through the Kitchener Jr. Rangers AAA program, where he spent years playing with his now Guelph Storm teammate Marko Sikic. In Bowman’s U-16 season, he put up an impressive 17 goals and 18 assists in 32 games while serving as team assistant captain.

Heading into OHL Priority Selection day in April 2019, Bowman was nervous for himself and Sikic, his teammate and friend. “The night before, Marko and I were hanging out at his house just going “Oh, I’m so nervous, what if we manage to go to the same team?” Bowman said.

The next morning Sikic got to breathe first as the Storm selected him in the 3rd round 55th overall, and when George Burnett called Bowman’s name with the 96th selection, the celebration was on. “I called him [Sikic], he only lives five minutes away,” Bowman said, “he and his family came over, and we celebrated together.”

Despite being drafted together, only one of them made the Storm out of 2019’s training camp, with Bowman instead sent to the GOJHL’s Kitchener Dutchmen. He immediately impacted the Dutchmen, scoring 24 goals and 20 assists in 50 games and being named Mid-Western Conference Rookie of the Year.

Bowman’s strong performance earned him a pair of call-ups to play two games with the Storm last season. Heading into his second training camp, he is relishing the opportunity that experience gave him, “That was awesome, just looking at how those guys prepare and get ready for a game, just trying to take those habits back to your own game.”

They spent years together in minor hockey, and when the new season kicks off, Braeden Bowman is ready to join Marko Sikic once again and make his case for a place on the Guelph Storm.