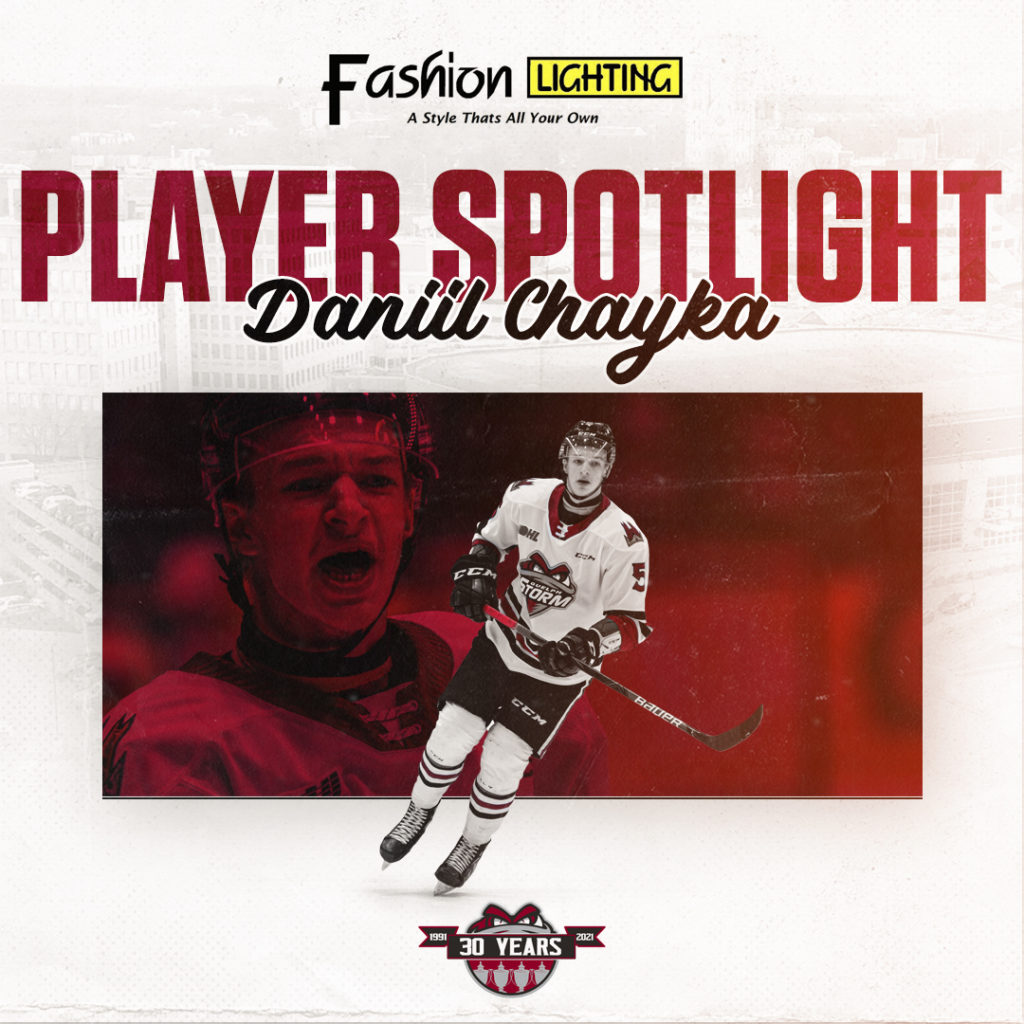 One day he hopes to be on an NHL blueline, but for now, Daniil Chayka is taking one step at a time, embracing each challenge along the way.

At just 16-years-old, Chayka came over from Russia to join the elite U16 Toronto Jr. Canadiens program. From navigating a new country to learning a new language, the experience was eye-opening for Chakya. “It was a really cool experience; everything was new for me,” he said, “I didn’t know what to expect, but I met a lot of good people who have helped me.”

Despite the challenges, Chayka quickly settled with the Jr. Canadiens. The 6-foot-3 defender finished in the top ten in scoring and second among defenders on the Jr. Canadiens, with 33 points (15 goals, 18 assists) in 45 games. In the 2018 OHL Cup Tournament, Chayka helped to defeat the Vaughan Kings with six points in seven games en route to their first championship since 2008.

Ultimately, the Guelph Storm selected the Russian-born defender seventh overall in April 2018, making the Royal City his future home. One player, in particular, eased the OHL transition for Chayka. “I knew Dimitri Samorukov for a long time,” he said. “I knew he was playing there, so the first thought when Guelph drafted me was [that] I’m going to play with him.”

Despite playing a limited role in 2018-2019, Chayka was still happy to help the Storm win the 2019 OHL Robertson Cup. It was this past season, though, that Chayka seems to be most proud of. “Everyone thought we were going to be the last place in the league. We did well, for the first half of the season, we were in the top five, and nobody expected us to do so well.”

Planning to hopefully hear his name called early in the 2021 NHL Entry Draft this July, waiting for the OHL season to resume has not kept the 18-year-old Chayka from getting on the ice. Since October, he and teammate Andrei Bakanov have been loaned to the KHL, with Bakanov playing 23 games for Kunlun Red Star and Chayka nine games for powerhouse CSKA Moscow.

Chayka also crossed a goal off his bucket-list by donning the Russian National Team jersey last month at the World Junior Hockey Championships in Edmonton, Alberta. “It was a really good experience,” Chayka said.” We lost, but I think we are going to come back stronger.”

For someone so used to being on the ice, Edmonton’s bubble experience was a little challenging for him. “It got a little bit boring” –” it was ok though, the food was good, and the hotel was nice.”

When the 2021 OHL season begins, Chayka has one goal in mind, “Do my best and help my team win the cup again.” No matter who is lifting the Robertson Cup at the end of this year, though, the memories Chayka already holds from their magical run will be with him forever. “We had an amazing run in those [2019] playoffs, and it is something I will remember all my life.”