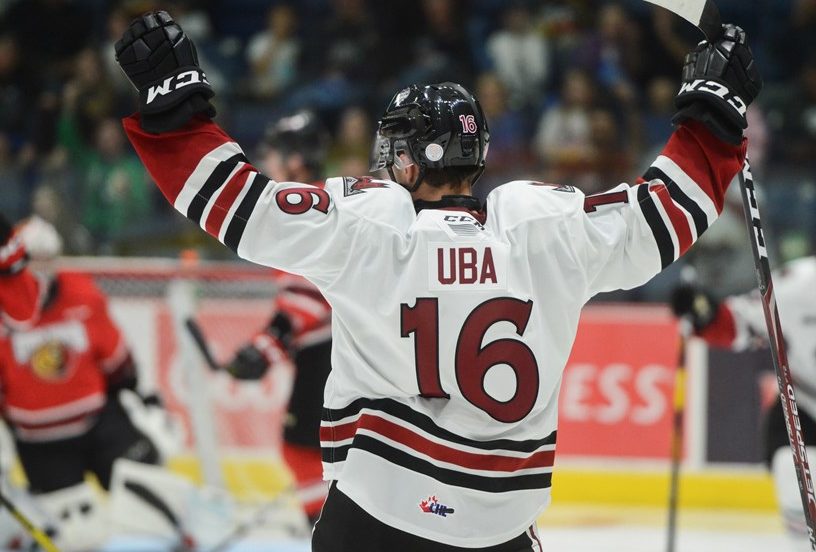 For a veteran like Eric Uba, the extended 2020 off-season has left him with time to plan for his future, but also with time to wonder whether he will get the chance to get back on the ice, in front of his family, playing the game he loves.

During the break, the 21-year-old spent his days studying and staying in shape. “I don’t like to sleep in; I like to get up and be productive,” Uba said, “I work out and then hit the books.” Being at home from the rink has given Uba the time to enroll in the University of Guelph’s Economics and Finance program. “I’m trying to make the most of everything.”

Time away from hockey has been difficult. Growing up twenty-five kilometres down the road from Guelph in nearby Kitchener, sports were a part of Uba’s life from the start. “I was always into sports because I always liked being active,” he said. “I played many sports growing up, soccer, golf, lacrosse, and hockey.”

Despite his many sports, it was hockey that drew Uba in. He spent his AAA U16 season with the Kitchener Junior Rangers, where he racked up 17 goals and 25 assists in just 33 games in the 2015-2016 season. He was rewarded by being taken 164th overall by the Flint Firebirds in the 9th round of the 2016 OHL Priority Selection.

Uba began his OHL career full-time with the Firebirds in the 2018-2019 season and immediately impacted the Flint lineup. His 19 goals and 23 assists placed him fourth on the Firebirds scoring and helped him demonstrate the two-hundred-foot game he has become known for. “I think I’m hard-working and strong on the puck,” Uba said. “I like to be physical on the ice, and I also have good offensive instincts.”

It was that two-hundred-foot game that attracted the Storm’s attention as just weeks before the start of last season, Uba was traded to Guelph for two future draft picks in 2020 and 2023. For most players, a trade can be unsettling, but Uba was excited. “It was the idea that my parents could easily jump on the 401 and come to a game instead of traveling three hours to Flint and staying in a hotel,” he said. “That and having the freedom to go home on off days.”

Stepping into a Storm lineup missing some offensive pieces from the 2019 championship, Uba quickly took on a strong two-way game for Guelph. He finished second on the team with 29 goals and third with 58 points. He hit his stride in the second half of the season, picking up 18 goals and 14 assists in 29 games in 2020.

Heading into what would be his final season, Uba’s OHL future is up in the air. With that in mind, he has started to plan for life after Guelph. “My goal is a pro contract, and doing whatever I can to create that opportunity for myself,” he said. “That’s Plan A, but if that does not work out, Plan B is I will take my education package and get a business degree.”

No matter what happens this season or where he ends up in the future, Uba is grateful for his time in the Royal City. “The city of Guelph is one of the best cities in junior hockey, and I couldn’t think of a better rink to play in than the Sleeman Centre.”

Name that Guelph Snowplow!
5 hours ago