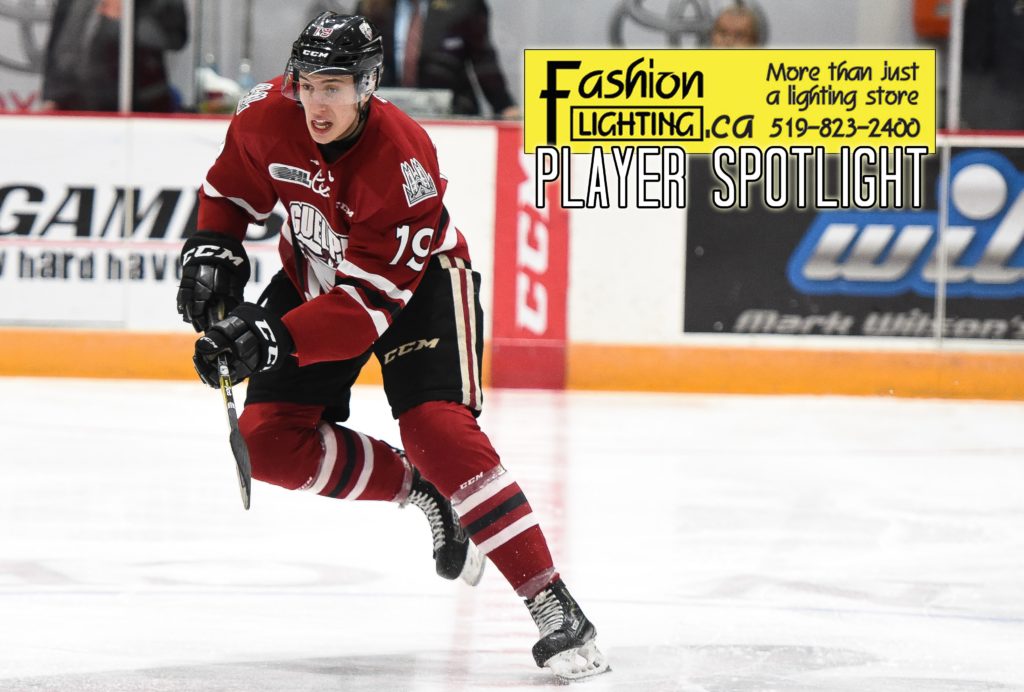 When it came time to finally hear his name called at the 2017 NHL Entry Draft, Isaac Ratcliffe might be missing a few details.

“I remember walking down to the stage and as soon as the guy came to shake my hand, I blacked out a little bit,” Ratcliffe, the second round (35th overall) pick of the Philadelphia Flyers, explained with a smile. “I remember pulling the jersey over my head and shaking a little bit, walking over to the table to meet Ron Hextall and the rest of the Flyers staff.”

“It really felt like the first day of the rest of my life,” he continued. “That’s the dream you’re thinking about ever since you’re a little kid — that draft day type feeling — I finally lived and it finally came true for me.”

Although a dream come true, some were expecting to hear Ratcliffe’s name called on the first day of the draft, in the first round. The Guelph Storm forward, however, went into the milestone weekend with no expectations.

“It was a little tough sitting through the whole Friday, hoping to go and not hearing my name called,” Ratcliffe offered, adding that being able to go to an organization like the Philadelphia Flyers made it all worth the wait. “But I got an extra day to enjoy it, got to hear my name called early the next morning, was able to spend it with my family and friends, and really did not take off that Flyers sweater as soon as I put it on.”

Looking back on it all, now with an NHL jersey in hand, Ratcliffe has no hesitations on who to credit for his career’s success.

“My parents,” he quickly responded, adding that Al and Elaine Ratcliffe have always been the driving force behind his success. “Ever since I was a young kid in Learn To Skate, or my first hockey game, or whatever it was, they were always the one who allowed me to make my own decisions through hockey, and they always supported me no matter what those decisions were.”

The 18-year-old forward continued on the support of his parents, highlighting the pressures of playing through your NHL draft year — a sophomore OHL campaign that saw Ratcliffe tally 54 points (28 goals, 26 assists) in 67 games.

“They knew all the pressure I was going to be put under, and they did their best to take that pressure off me — that was definitely a big part of my success last season.”

That very success continued for Ratcliffe throughout an offseason that featured the six-foot-five, 203-pound winger attending his first NHL Prospect Camp and signing his first NHL contract.

“It was awesome,” Ratcliffe said of the Flyers Prospect Camp. “For us to get that experience and really know what it’s going to take to play at that high level, and getting to meet the rest of the staff and players that are a part of that organization… it all starts to become a little more real, and really shows where you could be in the future.”

As for inking an entry-level deal, it was yet another experience that went beyond any expectation.

“I didn’t have any expectations with that either — especially doing it so soon after the draft, that was extremely exciting for me,” Ratcliffe explained, adding a list of those who helped make it possible. “Being able to do it with my family by my side, in my hometown, I really couldn’t thank them enough for it, and all the players I’ve had a chance to play with, my agent, and the rest of the coaches in the past as well — all those people have really made that happen for me.”

Looking ahead to the 2017-18 season after an offseason filled with personal success, Ratcliffe’s humble team-first attitude hasn’t changed.

“We have a lot of new faces and a lot of older faces that are really going to drive this team to success,” the third-year veteran said of what’s to come. “I want to be one of the leaders on this team where we can really get to that next level and push for that playoff spot, and even push for that championship.”