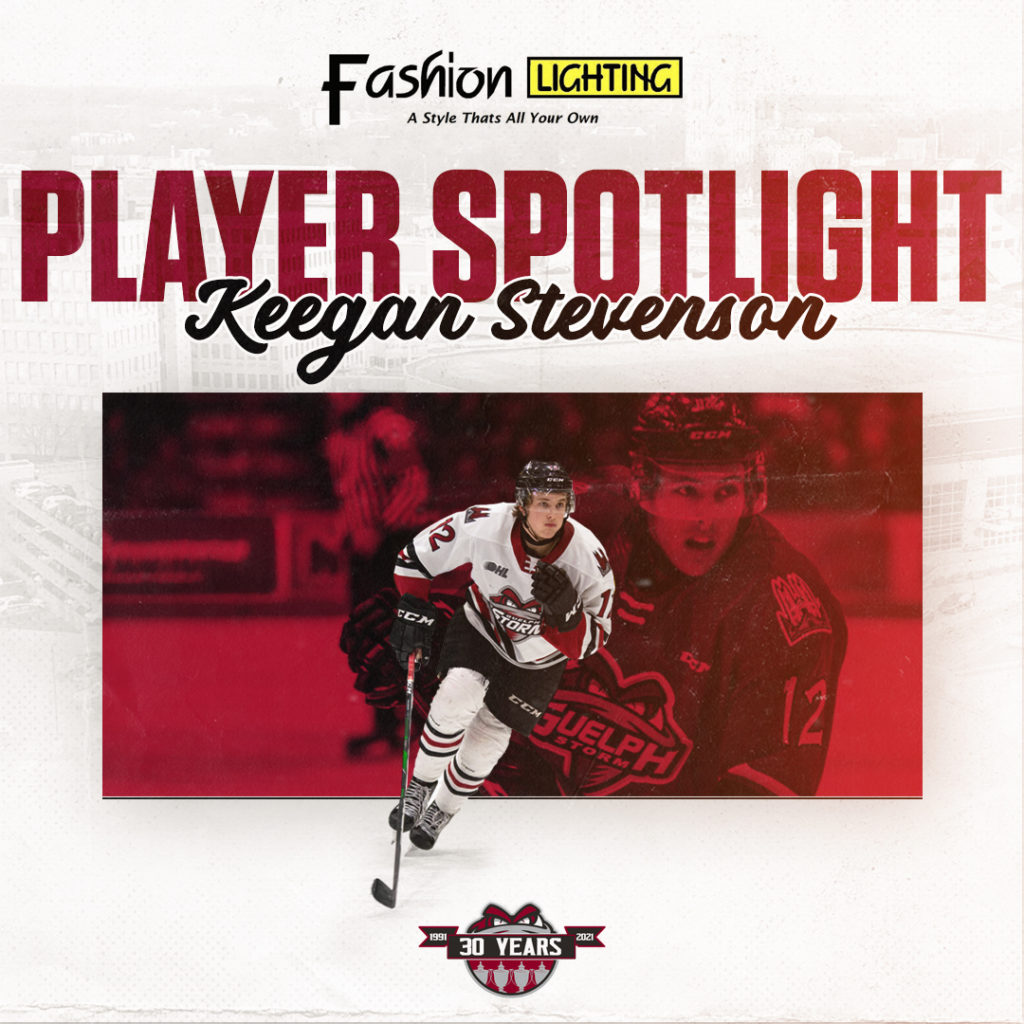 After 179 career OHL games and one OHL Championship, waiting to play was not what Keegan Stevenson had in mind for his final OHL season. Rather than hitting the ice at the Sleeman Centre, the extended offseason has brought the 20-year-old Sault Ste. Marie native back home and left him with the outdoor ice of Northern Ontario to skate on while he waits.

“We have an outdoor rink, so I have been trying to get out there and keep my conditioning up,” said Stevenson, “I live on a lake, so once it gets cold, we could just skate wherever we want.”

Whether outdoors or indoors, hockey has been part of Stevenson’s life from the day he was born. He quickly found a role model in hockey in his father, Jeremy. Over parts of nine NHL seasons split between Anaheim, Nashville, Minnesota and Dallas, his dad played in over 200 NHL games. “My dad was a hockey player, so growing up, I watched him play, and I just fell in love with it.”

Stevenson spent his minor hockey career at home in Sault. Ste Marie eventually playing his U16 AAA season with the Great North Midget League’s Soo Thunderbirds. His performance of 17 goals and 29 points in 21 games at just 15-years-old caught the eye of the Storm. They rewarded him with a selection in the sixth round of the 2016 OHL Priority Selection. “I was actually on a bus in Toronto for my sister’s hockey tournament, watching the draft on my phone,” said Stevenson. “My name popped up, and my mom just started shouting.”

Stevenson spent the 2016-2017 season with the Soo Thunderbirds, Jr. A club of the NOJHL, before making the Storm out of training camp in the fall of 2017. For the then 16-year-old, the transition to the OHL was not easy, but it was worth it.” I was definitely nervous about moving far away from home, but I stuck with it, and everything worked out.”

Following a rookie year in 2017-2018 in which he picked up 10 points in 61 games, in 2018-2019, both he and the Storm had breakout seasons. Stevenson tripled his point total from his rookie year, finishing with 19 goals and 15 assists for 34 points, while the Storm moved up 21 points in the standings finishing 4th in the Western Conference. In the 2019 playoffs, Stevenson picked up three goals and two assists as the Storm rode their breakout season to the 2019 Memorial Cup.

“It was crazy; we were down almost the entire playoffs, going down 3-0 to London and then 2-0 to Ottawa, and we made a huge comeback each time,” said Stevenson. “It was truly something I will remember forever.”

Now entering his final OHL season, Stevenson knows his role has grown from a robust two-way player to one of a young Storm roster’s essential veteran voices. “My goal is to go out and be a leader for the younger guys, to be able to give them some support, and be a guy George can lean on for good minutes.”

Despite knowing his time spent on Woolwich St is almost finished, Stevenson is thankful for all of the experiences being a part of the Storm has brought him. “Guelph is definitely far from where I am from, it was a new start, but I stuck with it and made a lot of new friends.”