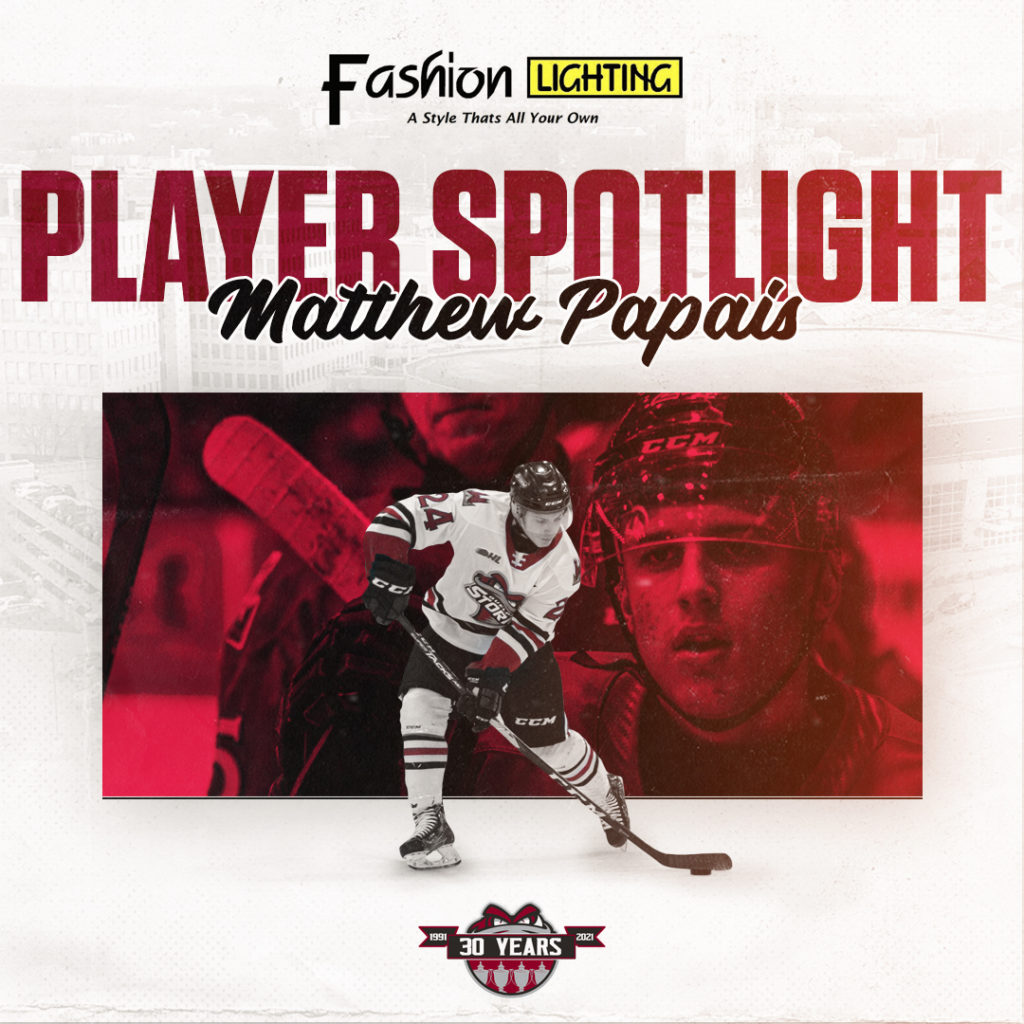 “Where you are depends on how you get there.”

These words, from Canadian children’s author and Guelph resident Robert Munsch describe Matthew Papais’ career well. A career that still has lots of room for growth and development towards those sought after highs, but has and remains grounded in hard work.

Like many young athletes, Papais’ love of the game started from a very young age. “It was in preschool,” said Papais. “They always had a rink in the backyard of the school for the kids to go out.” “I started there when I was young, just wheeling around.” With an abundance of outdoor pond hockey also available to him in Nobleton, Ontario, it wasn’t long before the speedy winger was flying up and down the ice, in the realm of his favourite childhood player, the Washington Capitals’ Alexander Ovechkin.

As Papais has matured, his game has grown as well.  “Growing up, I was strictly offensive, but I have realized that you need to adapt for the next level,” he said.  “I like to call myself a goal scorer, but I like to set my teammates up for good opportunities too.”

After an U16 Season with the Mississauga Reps AAA, where he scored 34 points (15 goals, 19 assists) in 33 games, the Storm selected Papais with the 128th pick in the 2018 OHL Priority Selection. Finding out the Storm called his name was a monumental achievement, but Papais remained humbled, recognizing how far he had to go. “I was excited, but I knew I was a later round pick, so I still needed to grind and put the work in if I wanted to play there.”

His OHL career began significantly earlier than expected, as he began the next season with 25 points in 24 games with the OJHL’s Brantford 99ers. Thanks to his blazing start, on November 29, 2018, the Storm formally signed Papais and just twelve days later, he made his OHL debut.

“My first game was in Owen Sound; I went into the room, and I looked at the board and saw I was on the second line, and I was like wow, this is different.” All told, Papais suited up for 12 games during the 2018-2019 regular season picking his first career point with an assist in a game against the Flint Firebirds in February 2019. It was another step forward for him, but he still was striving for greater heights.

When 2019-2020 rolled around, Papais broke camp with the Storm. His start was slow but steady with no goals but one assist and nine shots through his first six games. On October 18, 2019, halfway through the second period of what became a wild 7-5 win over the Erie Otters at the Sleeman Centre, the goal scorer finally got his goal, or as he tells it–

“We were in our end; McFarlane got the puck, and I was picking up steam through our zone,” said Papais. “Ben passed me the puck, and I saw a little opportunity past the first defender so I cut into the middle of the ice and slipped it past the goalie.”

“I’ve never scored with a crowd like that, with everyone screaming, it felt great.”

Getting his first goal did not change the rookie’s path in his first year but did help reinforce that he belonged in the OHL and served as a reminder to keep moving forward. The goal to keep pushing was evident throughout the entire Storm locker-room in 2019-2020, thanks to a team that felt disregarded as an OHL favourite.

“I think coming into the year, we were a little under-looked,” said Papais. “We proved a point that we could compete; I loved proving people wrong.”

As he awaits the OHL’s return, Papais has been working hard to stay in shape. “Every day I’m working out, my usual routine I’ll wake up, eat breakfast, work out, then I’ll head to work, come back then work out again.” When he finally gets back on the ice for the Storm, though, the goal is simple, “I’m just gonna give it my all on and off the ice, and I feel like on the ice, the hard work is going to reflect it.”

“Where you are, depends on how you get there”. For Matthew Papais, a late-round draft pick that has had to work every day to earn his place in the Storm lineup, the feeling rings true. No matter where he ends up in the future, he knows that he will be grateful so long as where he ends up is on the back of his hard work.