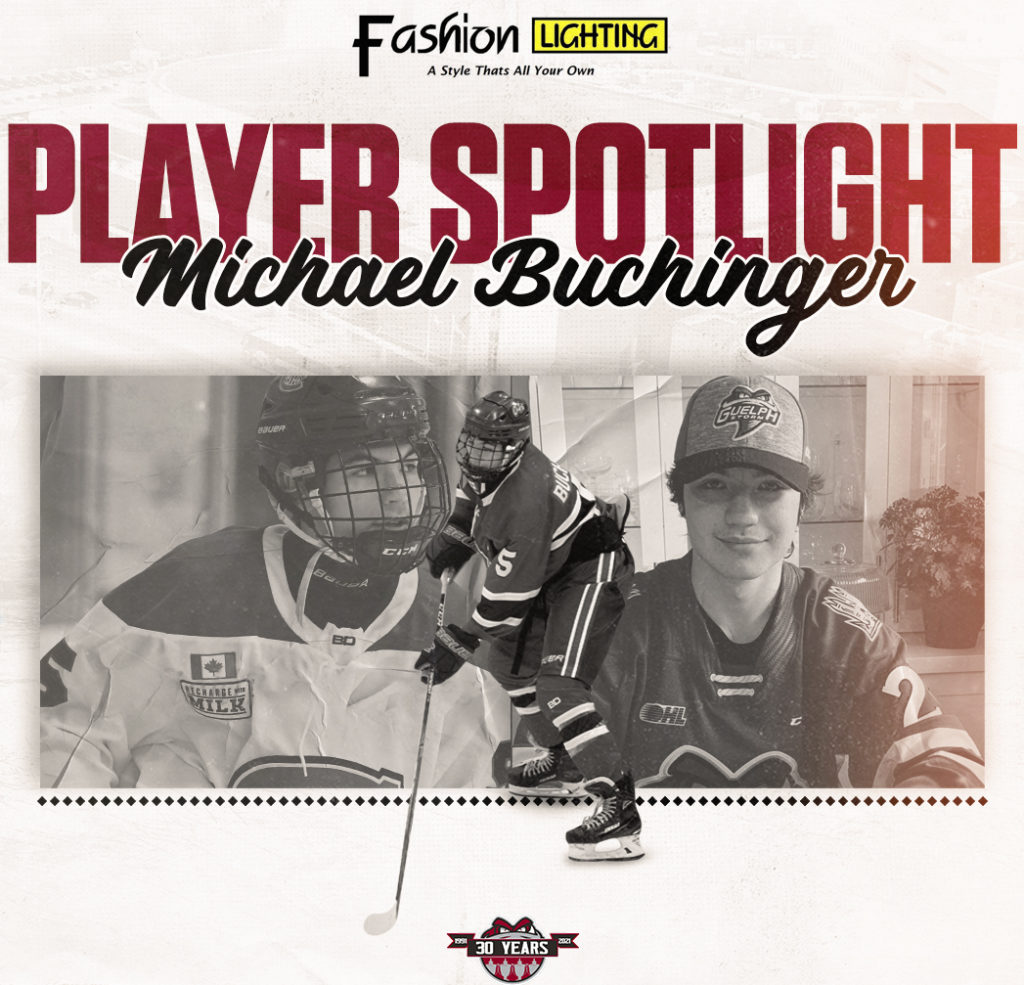 Long before the 16-year-old from Stouffville, Ontario was selected 24th overall by Guelph in the 2020 OHL Priority Selection, Buchinger began his hockey journey the same way so many have before him. “When I was growing up my family was really into hockey, they were big Leaf fans.”

“My dad first gave me a hockey stick when I was three years old, I loved it then and haven’t stopped.”

Growing up, Buchinger worked his way through the Toronto Jr. Canadiens program, making a name for himself with his strong offensive abilities from the backend. “I like to lead the rush and make plays” he said, “I pride myself on having a two-way game as well but the main parts of my game are offence, playmaking and making a good first pass.”

During his 2019-20 U-16 season, Buchinger played on the blue line of an elite Jr Canadiens U16 AAA team that included the 1st and 2nd Picks 2020 OHL Priority Selection picks in Ty Nelson (North Bay) and Pano Fimis (Niagara). Along with Aidan Castle who went to Oshawa with the 13th selection.

Altogether the Canadiens’ juggernaut roster stormed their way through the regular season finishing atop the standings with a 28-3-2 record. They rode their momentum all the way to a seemingly one-sided championship match-up against the fifth place Vaughan Kings.

The Canadiens fell down two games to zero in their best-of-five match-up but according to Buchinger they never stopped believing they had a chance. “In the finals, we were down two games and it was a best of five series, but we knew we were a good team, and we came together to pull off the comeback.” The Jr. Canadiens were not able to compete in the OHL Cup as COVID-19 paused hockey the following week, but it gave Buchinger a happy ending to his minor hockey career.

It was after that win that Storm Head Coach and General Manager George Burnett really took notice of Buchinger. “Michael made a significant contribution to his team last season, helping them win the prestigious GTHL Championship,” Burnett said following April’s Priority Selection. “He is an elite skater and puck mover who thinks the game at a very high level. We are pleased to welcome Michael and his family to the Storm.”

When selection day rolled around on April 4, 2020, not even a sleepless night beforehand could dampen Buchinger’s excitement. “The night before I was pretty nervous, I had trouble sleeping cause obviously it was a big day, we sat around the TV and when my name was called and I saw I was going to Guelph I was ecstatic to be going to such a good team and a great organization.”

As the 2021 OHL season nears, Buchinger is excited to make an impact on the ice, but also to get to experience Guelph, and all it has to offer. “I hear it is a great city, the community is amazing, the fans are great, I’m really looking forward to playing in such a great community.”