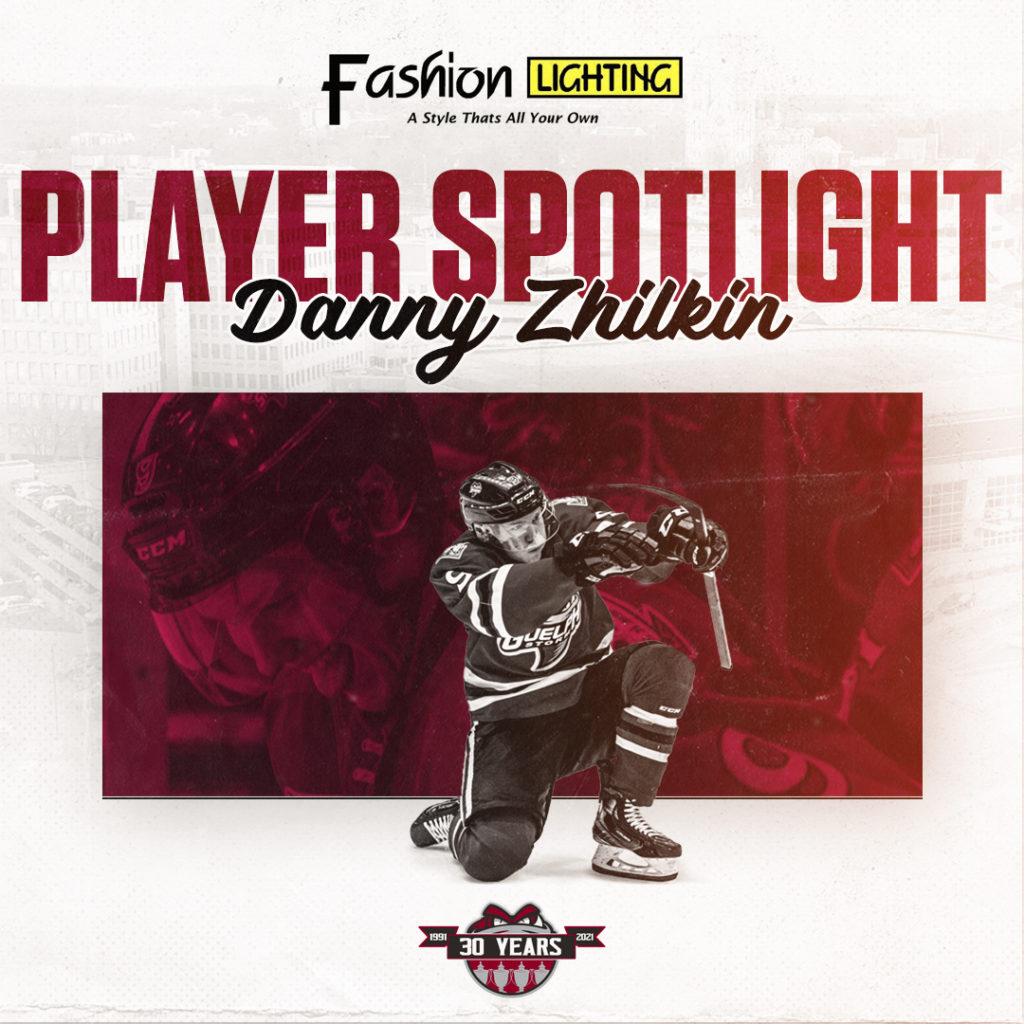 Some OHL careers begin with a bang; for Danny Zhilkin, his began with a ping.

On Opening Night 2019, on his first OHL shift, Zhilkin  took a Ty Collins feed in the slot and rifled it over the shoulder of the Ottawa 67’s Cedric Andree, pinging off the right post into the back of the net for his first OHL goal, just 90 seconds into his OHL career.

For the now 17-year-old, it was the start of what would be an up and down rookie season with the Storm. “I think I started well; as the season went on, my confidence went down a bit, but I finished with a four-game point streak,” said Zhilkin.

Long before his time in Guelph, Zhilkin’s hockey journey started at home in Russia, but it was not an enjoyable experience at first. “I was four-years-old when my dad signed me up for skating. I didn’t like it at the beginning. I used to cry a lot when I went to practice; I’m not sure why.”

Originally from Moscow,  Zhilkin was six when his family immigrated to Canada. He found his passion for hockey as he found himself fighting for a place within the GTHL’s Toronto Marlboros organization. In his U15 season with the Marlboros,  Zhilkin scored 32 goals and 24 assists for 57 points in 69 games en route to being selected 15th overall by Guelph in the 2019 OHL Priority Selection.

After selecting Zhilkin, General Manager George Burnett was clear on what drew him to the 186cm centre. “Danny is an elite skater and possesses the type of high-end skill that will allow him to be an impact player,” he said.

A rookie season in Guelph was not all for Zhilkin, as he added national experience to his resume in the fall of 2019 after being selected to play for Team Canada Black at the 2019 World Under-17 Hockey Challenge. This came on top of his previous experience in February 2019, in which he suited up for Team Ontario at the 2019 Canada Winter Games.

Both those experiences stick out for Zhilkin for different reasons, “playing for Team Ontario was such a professional atmosphere it almost felt like the Olympics.” he said, “and playing for Canada at the U17s, what sticks out is the guys you meet and the time you spend with them.”

At the Sleeman Centre, Zhilkin put up a respectable seven goals and eight assists in sixty games, but when his sophomore season begins, he feels he is poised to improve on last year’s output. “I worked a lot in the offseason,” he says, “I learned a lot of moves, especially down low, so I know where to go more.”

Zhilkin’s junior hockey career began at full-tilt when he scored on opening night, and since rippling twine against Oshawa, he has gained new confidence and is ready to go when play resumes.