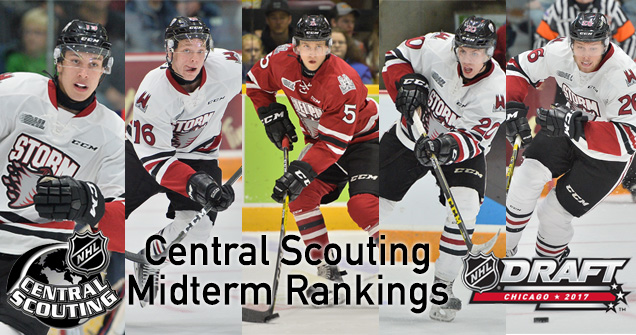 The National Hockey League’s Central Scouting department released their midterm rankings for the 2017 NHL Entry draft and five members of the Guelph Storm were featured in the North American Skaters list.

Forward Isaac Ratcliffe is ranked the highest at 20th overall. The London, Ontario native leads the Storm in goals (20) and points (38). The six-foot-six, 195-pound forward became the first member of the Storm to hit the 20-goal mark this season, with a tally in Tuesday night’s win against the Niagara IceDogs. In total, Ratcliffe has 20 goals and 18 assists for 38 points in 43 games, almost triple his points total from last season.

Nate Schnarr, is right behind Ratcliffe, ranked at 32nd overall. The rookie forward has remained one of the most consistent forwards of the young Storm core. Since returning from his injury, the Waterloo, Ontario native has four goals and three assists for seven points in nine games. In total, the six-foot-three, 180-pound forward has 12 goals and nine assists for 21 points in 30 games.

Rookie defenceman Dmitri Samorukov is ranked at 122nd overall. Quickly adjusting to the North American game, Samorukov has become a key piece to the Storm’s defensive unit. With a few injuries on the blue-line, the Volgograd, Russia native has relished in his increased role. The six-foot-two, 180-pound forward has shown flashes of offence throughout the year with three goals and nine assists for 12 points in 42 games.

After being rated as a “C” prospect in the November rankings, Nick Deakin-Poot comes in ranked at 135th overall. The Georgetown, Ontario native, has come into his own as we enter the second half of the season. Already surpassing his totals from his rookie season, the power forward continues to improve with each passing game. In total, Deakin-Poot has three goals and four assists for seven points in 30 games.

Rounding out the Storm group is first-year import Albert Michnac. Currently tied for sixth in team scoring, and third in goal, the Prague, Czech Republic native has a knack for the net, using his lethal shot to beat some of the leagues top goalies. In total, the five-foot-11, 175-pound forward has 12 goals and nine assists for 21 points in 41 games.

To see the full list of players ranked by the NHL’s Central Scouting, click HERE. The North American rankings can be found at the link below.