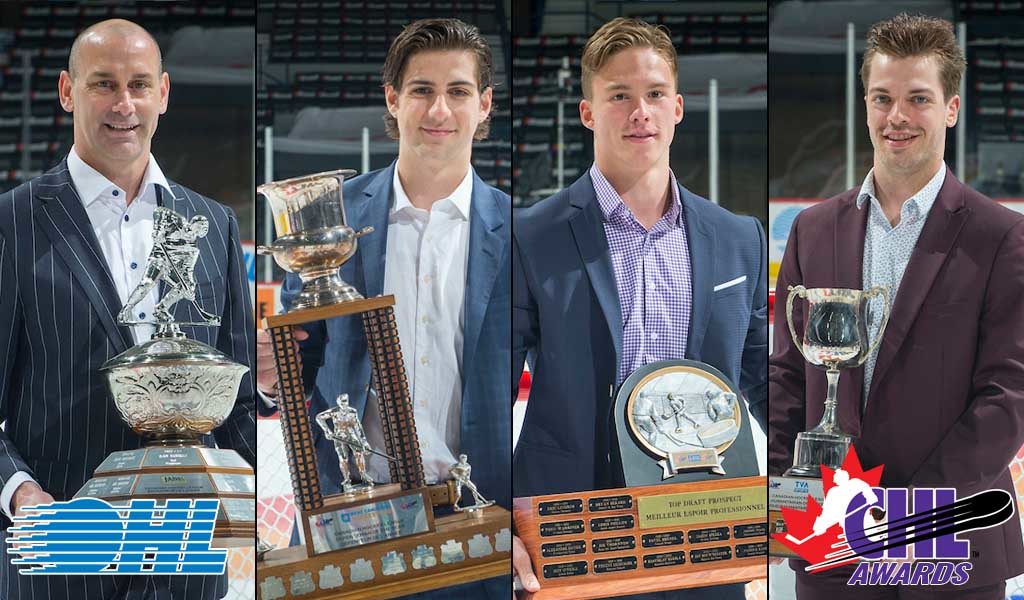 Regina, SK – The Canadian Hockey League today announced the 10 national award winners for the 2017-18 season including four standouts from the Ontario Hockey League.

The awards were presented as part of the 2018 Mastercard Memorial Cup festivities in Regina.

Sherwin-Williams Top Prospect Award: Andrei Svechnikov, Barrie Colts
Barrie Colts forward Andrei Svechnikov is listed number one in NHL Central Scouting’s Final North American Rankings for the 2018 NHL Draft in Dallas.  The 18-year-old forward from Barnaul, Russia, registered 40 goals, 32 assists and 72 points in an injury-shortened 44-game rookie season.  He becomes the first OHL player to win the award since first overall NHL Draft pick Connor McDavid of the Erie Otters did so in 2014-15. Finalists for the award include Filip Zadina of the Halifax Mooseheads who was listed third by NHL Central Scouting, and Ty Smith of the Spokane Chiefs ranked 14th.

TVA Sports Humanitarian of the Year Award: Garrett McFadden, Guelph Storm
Guelph Storm captain Garrett McFadden is the CHL’s Humanitarian of the Year after being named a finalist for the award last season, establishing himself as an exceptional ambassador for his team and the league both on and off the ice. The 20-year-old native of Kincardine, Ont. continued his tremendous work with ‘McFadden’s Movement’ in support of youth mental health awareness.  The initiative took new heights in 2017-18 with the introduction of an Ambassadors Program along with fundraising efforts that totaled $20,000 to local mental health resources. The $20,000 raised by McFadden’s Movement fundraising programs and corporate partnership support more than triples his donation from 2016-17, and has been split between WES for Youth Online (a free youth online counseling service created in memory of McFadden’s family friend), and the Canadian Mental Health Association Waterloo-Wellington Branch. On the ice, the fifth-year veteran recorded six goals, 38 assists and 44 points in 68 games. McFadden is the first OHL player to win the award since Saginaw’s Will Petschenig did so in 2015-16. Finalists for the award were New York Rangers prospect Ty Ronning of the Vancouver Giants and forward Vincent Tremblay-Lapalme of the Chicoutimi Saguenéens.

Janes Brian Kilrea Coach of the Year Award: Drew Bannister, Sault Ste. Marie Greyhounds
Drew Bannister led the Sault Ste. Marie Greyhounds to an all-time franchise best record of 55-7-3-3, topping the CHL Top-10 Rankings throughout much of the 2017-18 season. The 44-year-old from Belleville, Ont. helped the Greyhounds earn a Western Conference crown, capturing their fifth Hamilton Spectator Trophy as OHL regular season champions.  They set a franchise record 23-game winning-streak from October 28 to December 30 which ranks third best in OHL history, and generated a run of 29 consecutive contests without a regulation loss.  The Hounds also went on a 27-game home winning-streak from October 20 to March 14 which stands as the second-longest in OHL history following the club’s undefeated season at home in 1984-85.  The 116 points and .853 winning-percentage are both tied for second best all-time under the 68-game schedule. Bannister is the OHL’s second straight recipient of the award following Owen Sound’s Ryan McGill in 2017. Finalists for the award were Manny Viveiros of the Swift Current Broncos and Joel Bouchard of the Blainville-Boisbriand Armada.

Superstore Defenceman of the Year Award: Nicolas Hague, Mississauga Steelheads
Vegas Golden Knights prospect Nicolas Hague of the Mississauga Steelheads earns Superstore CHL Defenceman of the Year honours after setting an all-time franchise record for goals by a defenceman with 35, adding 43 assists for 78 points in 67 games. His 35 tallies were the most by an OHL defenceman since 1998 as he finished the season with 26 multi-point performances. Hague becomes the first OHL recipient of the award since Sault Ste. Marie’s Anthony DeAngelo claimed the honour in 2014-15. Finalists for the award were Los Angeles Kings prospect Kale Clague of the Moose Jaw Warriors and fifth-year veteran Olivier Galipeau of the Acadie-Bathurst Titan.