Friday Highlights: Firebirds take a wild one in Guelph 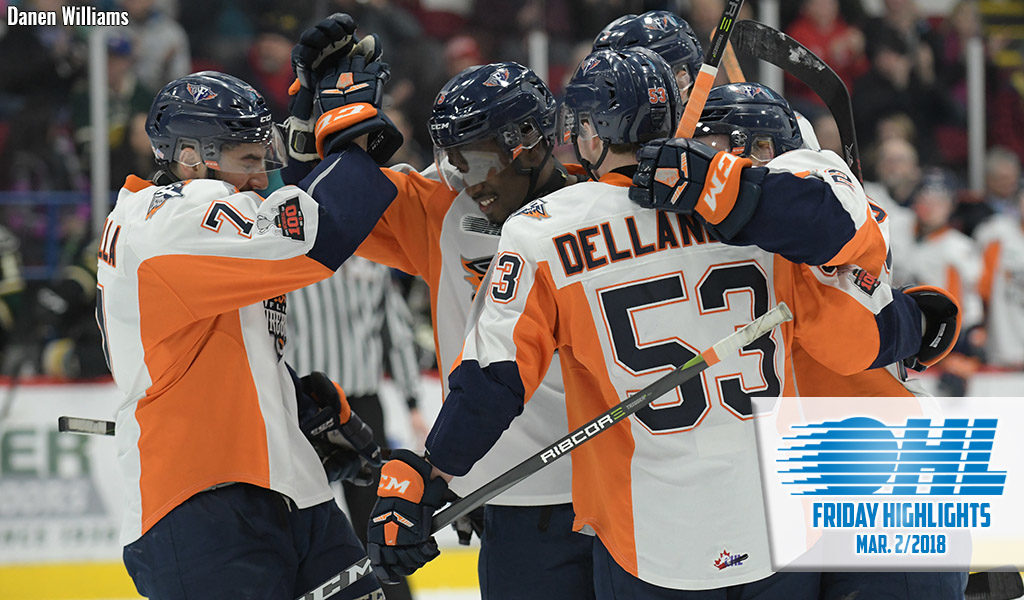 FLINT 6 – GUELPH 5 – OT
The Flint Firebirds saw a 5-1 lead evaporate in a matter of nine minutes as Isaac Ratcliffe (33, 34, 35) netted a hat-trick to knot the score at five and force overtime before Arizona Coyotes prospect Jalen Smereck (10) emerged as the hero. The Firebirds took a 6-5 win to snap an 11-game slide as Ty Dellandrea and Maurizio Colella picked up assists on the game winner. Colella (20), Dellandrea (24), Jake Durham (8), Ethan Keppen (8) and C.J. Clarke (15) accounted for goals while Luke Cavallin made 36 saves, helping Flint snap a 15-game road losing skid, winning away from home for the first time since Dec. 16th. Colella’s opening goal 1:38 into the first period ended a Firebirds road scoreless streak of 206:05. Keegan Stevenson (3) and Mason Primeau (5) joined Ratcliffe in the goal-scoring column for Guelph as the Storm outshot Flint 41-25 and went 2-for-5 on the power play. The Storm suffer an eighth straight loss, falling to 27-25-4-4 for sixth in the Western Conference.
GAME CENTRE

SAULT STE. MARIE 6 – SARNIA 5 – SO
Drake Rymsha (29, 30) tied the score at five with 1:38 left in the third period to force overtime and a shootout where the Sault Ste. Marie Greyhounds prevailed on a winning goal from Anaheim Ducks prospect Jack Kopacka (26, 27). Kopacka scored twice in regulation and added an assist while Hayden Verbeek tallied four helpers on the night. Morgan Frost (38) recorded his 100th point of the season with a goal while other markers came from Tim Gettinger (32) and Mac Hollowell (12). Matthew Villalta made 37 saves in goal and stopped all three shootout opponents that came his way, denying OHL scoring leader Jordan Kyrou with the glove to secure the win. Cam Dineen (19), Franco Sproviero (10) and Mitch Eliot (2) scored additional goals for Sarnia while Aidan Hughes took the loss with a 32-save showing. The Greyhounds earn their sixth straight win, improving to 51-6-2-2 for 106 points. Sarnia falls to 42-15-4-1. The Greyhounds won four of the six meetings between the two teams this season.
GAME CENTRE

OSHAWA 3 – KITCHENER 2
The Oshawa Generals fell behind 2-0 but regrouped, scoring three unanswered goals for their sixth straight win. Domenico Commisso (18) scored the game winner 8:20 into the third period as the Generals edged the Kitchener Rangers 3-2 on the road to clinch a playoff spot and improve to 32-26-3-0 for fourth in the Eastern Conference. Brendan Harrogate (8) and Kyle MacLean (10) also had markers while Kenny Huether and Allan McShane both picked up two assists. The Generals were outshot 36-22 but goaltender Cole Ceci turned aside 34 shots, surrendering Kitchener goals off the sticks of Jonathan Yantsis (5) and Connor Bunnaman (25). The Rangers fall to 40-19-2-0 but hold a 10-point lead atop the Midwest Division.
GAME CENTRE

LONDON 3 – KINGSTON 0
2018 NHL Draft prospect Liam Foudy (22, 23) stayed hot with a pair of goals while Jordan Kooy turned away 25 shots to notch his first OHL shutout as the London Knights took a 3-0 victory in Kingston. Billy Moskal (6) also scored for London as the Knights improved to 34-23-2-2 and stayed a point up on Owen Sound for fourth in the Western Conference. February’s Vaughn OHL Goaltender of the Month Jeremy Helvig made 26 saves in goal for the Frontenacs as they dropped their third straight decision, dropping to 32-19-6-3.
GAME CENTRE

BARRIE 7 – NIAGARA 2
Ryan Suzuki (12, 13), Dmitry Sokolov (43) and Zach Magwood all had three points as the Barrie Colts skated to a decisive 7-2 win in Niagara. The Colts put themselves 11 points ahead of the IceDogs for the Central Division lead as Suzuki scored twice and had an assist, Sokolov had a goal and two helpers and Magwood collected three assists. Aaron Luchuk (44) opened the scoring for his 100th point of the season while Andrei Svechnikov (32), Jaden Peca (15) and Joey Keane (11) scored additional Barrie markers. Luchuk (19 games) and Svechnikov (16 games) both extended their respective point streaks. Leo Lazarev stopped 33 of the 35 shots that came his way as Niagara’s Kirill Maksimov (32) and William Lochead (4) were the only players to solve him. The IceDogs have won just two of their last 10, falling to 28-23-7-3 for fifth in a competitive Eastern Conference.
GAME CENTRE

NORTH BAY 2 – MISSISSAUGA 1
Christian Propp stopped 35 of 36 shots as the North Bay Battalion defeated the Mississauga Steelheads 2-1 on the road. Matthew Struthers (20) and Adam Thilander (10) scored second period goals less than a minute apart to give the Troops the edge they’d need to improve to 28-25-7-2. Battalion head coach Stan Butler became the fourth coach in OHL history to win 700 career games as his club sits sixth in the Eastern Conference. Nicolas Hague (31) provided Mississauga’s lone goal as the Steelheads dropped their second straight decision but remain nine points up on Peterborough for the final spot in the Eastern Conference.
GAME CENTRE