From the Stands: Hard to not cheer for the Storm’s Toropchenko

Alexey Toropchenko From the Stands 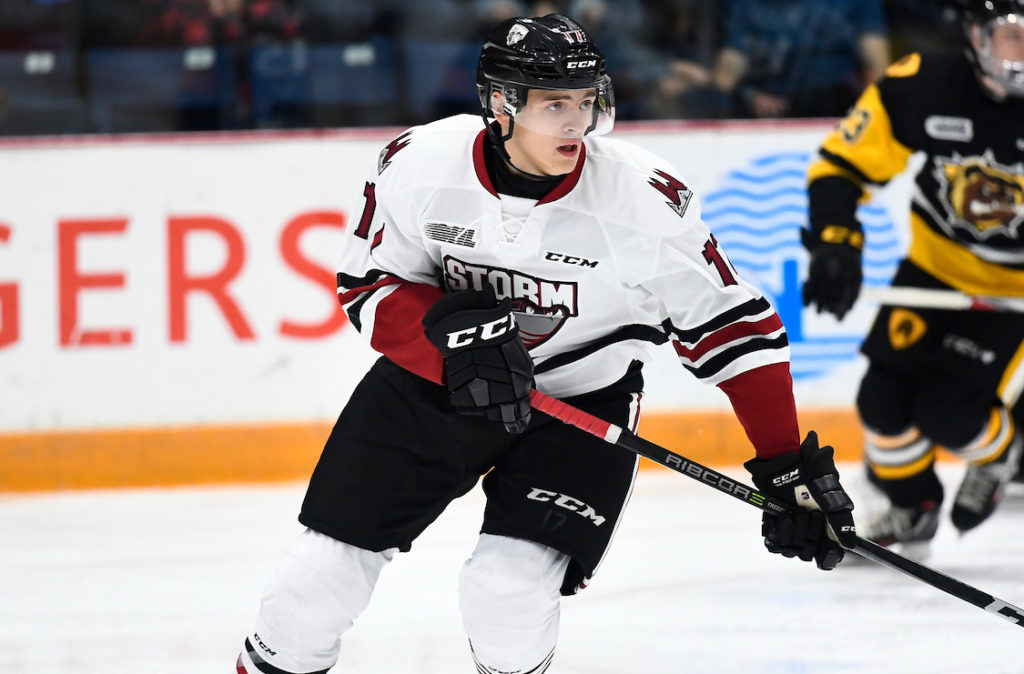 Despite taking five of a possible six points on the weekend, the Guelph Storm left with a bitter taste in their mouth after dropping a 3-2 overtime decision to the London Knights Sunday afternoon at home. But that coupled with a big 4-3 win in Windsor Thursday and a 4-3 overtime win over Saginaw Spirit Friday at home leaves the home side in fifth place with 59 points, three points behind the fourth place Knights, one ahead of the Spirit and two ahead of the Owen Sound Attack. The Spirit and Attack have a game in hand in the incredibly tight Western Conference.

Several players have picked up their game in the second half. Liam Hawel, Dmitri Samorukov and Owen Lalonde are all playing better and so is 18-year-old winger Alexey Toropchenko. After starting like a house on fire with four goals and four assists in his first four games this season, he had cooled considerably. But since returning from a Christmas break at home in Moscow, Russia, he has more jump in his step and more of a nose for the net.

“It is a little bit easier to play now because I’ve played 40 games,” said Toropchenko, using his improved grasp of our language. “I’m starting to understand hockey (in North America). Also I have learned English, which is helpful. (Teammate and best friend Dimitri Samorukov) and I have English classes twice a week so now I understand more and can speak better.”

But Toropchenko was dealing with more than just starting his hockey career in a new country. He lost his father, Leonid, to a heart attack last May at the age of 48. The senior Toropchenko was a centre playing professionally in Russia and spent two seasons in the American Hockey League with Springfield and Cleveland.

For the past two weeks his mother Julia was able to join him in Canada, so that connection may also have played a role in his improved play, but like most teenagers said with a big grin: “I’m always playing hard with or without my mom.”

But you can imagine that having her in Guelph meant the world to him as he tried to make his mark in hockey despite the passing of his father.

Playing mostly on a line with Cam Hillis and Isaac Ratcliffe recently, he has five goals in his last 10 games, but even before that coach George Burnett could see he was going to be a good player.

“Absolutely,” he said with conviction. “I know his points don’t show it but his work and his compete and his hustle and willingness to block shots and cycle the puck and protect the puck, there are a lot of things that are good there. He’s going to score down the stretch here, he had a nice goal (Sunday), and I think he’s going to turn into a real good hockey player for us.

Toropchenko’s goals for the rest of the season are simple.

“To always be working hard and getting more shots from everywhere,” he said. “Playing smart in the D-zone, playing a simple game and just working hard.”

The young 6-foot-4, 205-pound Russian was a fourth round draft pick of the St. Louis Blues in 2017 and with all the challenges he has faced over the past year, it is hard not to pull him.

From the Land of Oz . . . Storm defenceman Ryan Merkley missed all three games on the weekend because of a three-game suspension for slashing. He returns to the line-up this week . . . Storm winger Cedric Ralph left Sunday’s game with a sore hip. Burnett was not sure if he’d miss game action this week . . . The Storm hosts Ottawa Friday, then plays Erie twice — in Erie Sunday, before the return match in Guelph on Family Day Monday at 2 p.m.