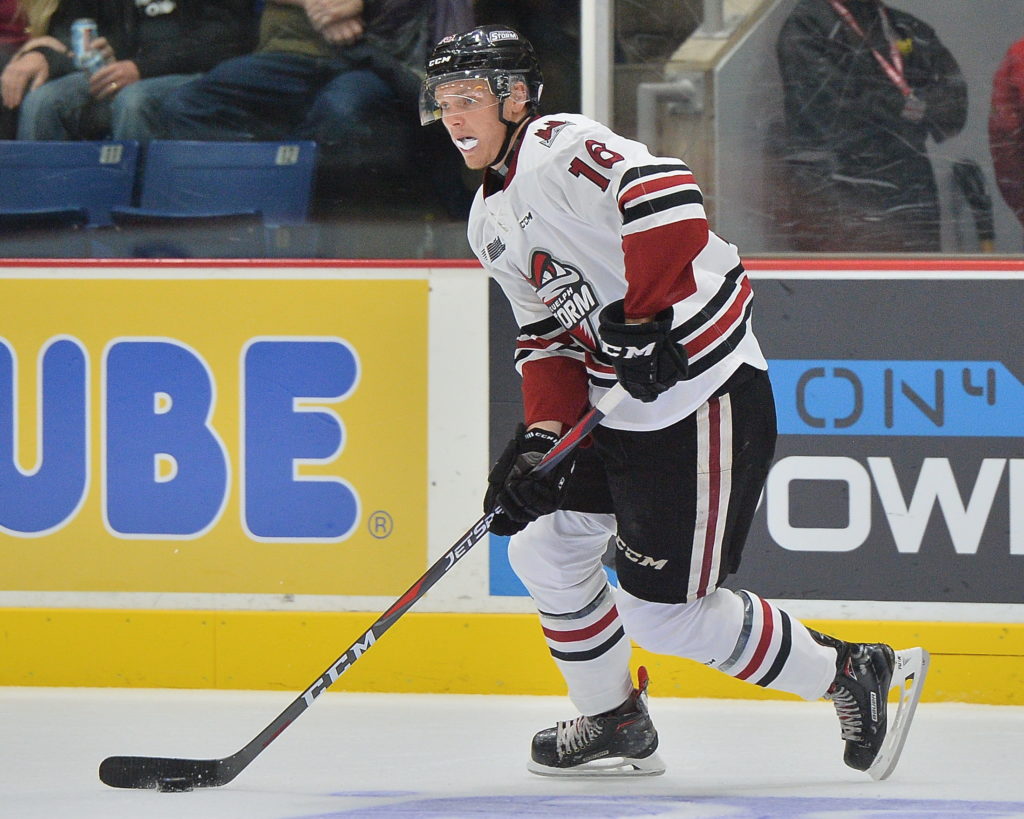 Guelph Storm forward Nate Schnarr’s signature jump into the glass after scoring a goal is becoming a very common sight in Ontario Hockey League rinks this year. The Waterloo native is tied for eighth in goals scoring with 14 goals in 19 games. He also has 14 assists making him the Storm’s point’s leader. Considering he only had 16 goals in 57 games last season, it is safe to say he is emerging as a very dangerous player.

Seven of those goals have come on the powerplay, where he trails only Kingston’s Jason Robertson who has eight. Schnarr’s favourite spot is off to the goaltenders right just inside the top of the circle where he waits for a pass from teammates like Isaac Ratcliffe or Ryan Merkley.

“A lot of credit is going to my line mates,” he said. “I get a lot of great passes and a lot of credit goes to our special teams and I owe all my (success) to my teammates in the dressing room.”

The third round draft pick of Arizona also credits the Coyotes player development coach and former NHLer Mark Bell. Bell has helped him maximize his opportunities when employing his one-timer from the slot.

“I think it’s about relaxing,” said Schnarr. “Mark just told me to relax, relax the upper body. When I get too stiff up top it doesn’t come off (my stick) right. I’m not trying to pick that corner perfectly I’m just trying to get the shot on net.”

And it’s not about picking corners either with the one-timer; it’s about getting the shot off as quickly and as hard as possible.

“You don’t look at the goalie, you just focus on the net and try to put it through him,” said the right-handed shot who had a hat trick in Friday’s 4-3 win over Barrie. “It’s about finding the right areas, not playing a perimeter game. You want to get on top of the crease, you want to get dirty and bang in the dirty goals.”

Storm coach George Burnett said that Schnarr was healthy and for the first time coming into the season and started to figure it all out.

“Absolutely but I think long before that, the reports we got this summer from people that he worked with who he didn’t have to work with, it was all about him doing extra,” he said. “He was highly motivated knowing he had an entire summer to prepare. The injuries are behind him, he’s strong, he’s opportunistic and I think he shows an excellent example around this group daily in practice. He keeps things light, even when things are not light, and he’s being rewarded for his hard work.”

Schnarr knows the goals are going in right now but also feels he is stronger mentally to battle through the little slumps that will inevitably come.

“I had high expectations for myself,” he said coming into this season. “Don’t take a day from granted. It’s about coming to the rink every day and getting better.”

From the Land of Oz … The Storm lost 2-1 in Windsor Saturday after a eight round shootout … This weekend the Storm has a rare Friday-Saturday doubleheader with Flint in town Friday night and London here Saturday for a 3:30 game. That game will be featured on Sportsnet.