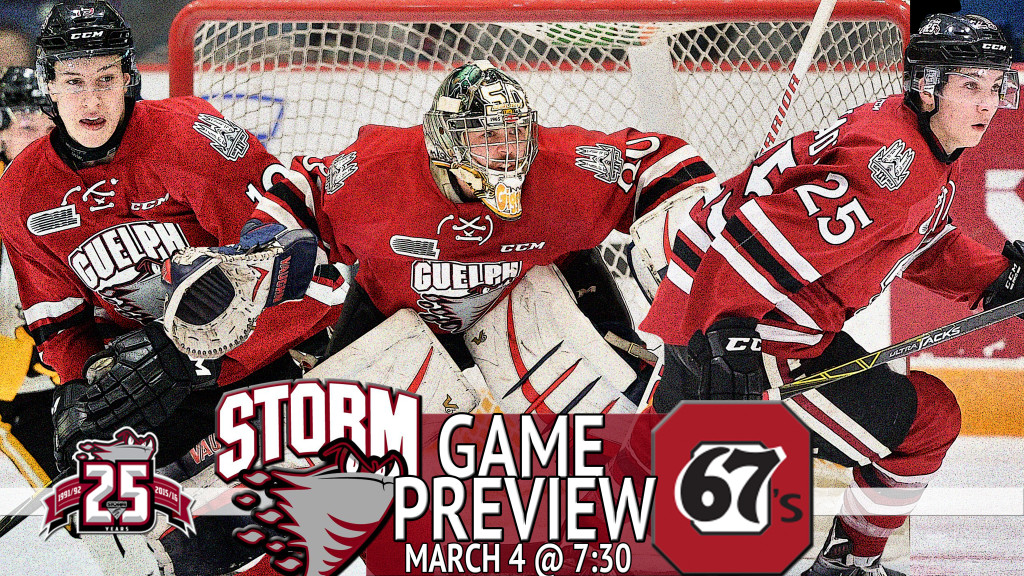 Beginning a three-in-three weekend, the Guelph Storm host the Ottawa 67’s for the second and final match-up of the season on Friday night.

The 67’s, making their lone visit of the season to Guelph, carry a 3-6-1-0 record through their last 10 games played – with only one win coming in their last eight contests – all the while pushing to snap a three-game losing skid that has seen the seventh-seeded Eastern Conference club fall 5-1 to the London Knights (Feb. 27), 5-2 to the Kingston Frontenacs (Feb. 29), and, most recently, 6-2 to the Barrie Colts on Thursday night. The last win for Ottawa came back on Feb. 26 in an 8-2 final over the Sudbury Wolves.

The Storm, not fairing much better, have a 1-9-0-0 record in their last 10 games played, and will be looking to snap a five-game skid on Friday.

Overage netminder Michael Giugovaz, likely to get the start between the pipes on Friday, has cemented himself as a guaranteed noteable on any night. Facing 40 or more shots in seven of his last eight games played, the six-foot, 166-pound goaltender has posted a remarkable .910 save percentage through 27 appearances with the Storm this season, putting the Brampton, Ontario native 11th among OHL goalies in the save percentage department. Since being acquired from the Windsor Spitfires in November, Giugovaz has posted a 9-12-2-2 record with one shutout.

In the last meeting between the Storm and the 67’s, sophomore Luke Burghardt scored the lone marker for Guelph, getting the visiting club on the board 2:19 into the game. On the season, the five-foot-eleven, 170-pound forward has registered 24 points (14 goals, 10 assists) in 53 games – surpassing his rookie point total of five (one goal, four assists) recorded through 54 games in the 2014-15 campaign.

As just one of the first round picks in the 2015 OHL Priority Selection to be playing in Friday’s game, Isaac Ratcliffe will be part of the up-and-coming display. The 15th overall selection has compiled five goals for 12 points in 40 games this season, while registering two goals and three assists through the month of February.

Picked right after Ratcliffe in the 16th slot in the 2015 OHL Priority Selection was Guelph, Ontario native, Austen Keating. Friday’s game will be the first appearance in front of his hometown crowd for the 67’s freshman. The five-foot-eleven, 162-pound forward leads all Ottawa’s rookies with 28 points (13 goals, 15 assists) in 44 games this season.

Looking at a veteran on Ottawa’s roster, fourth-year Jeremiah Addison recorded two points (one goal, one assist) in the last match-up between the Storm and the 67’s. The six-foot, 189-forward has 49 points (25 goals, 24 assists) in 60 games this season, registering a new career-high after surpassing his previous best of 47 points (19 goals, 28 assists) posted through 63 games in 2014-15.

With one goal – the eventual game-winner in the 4-1 win for the 67’s over the Storm on Nov. 28 – Evan de Haan earned first star honours. The fourth-year defenseman has compiled 30 points (eight goals, 22 assists) in 54 games this season, setting a new career-high.