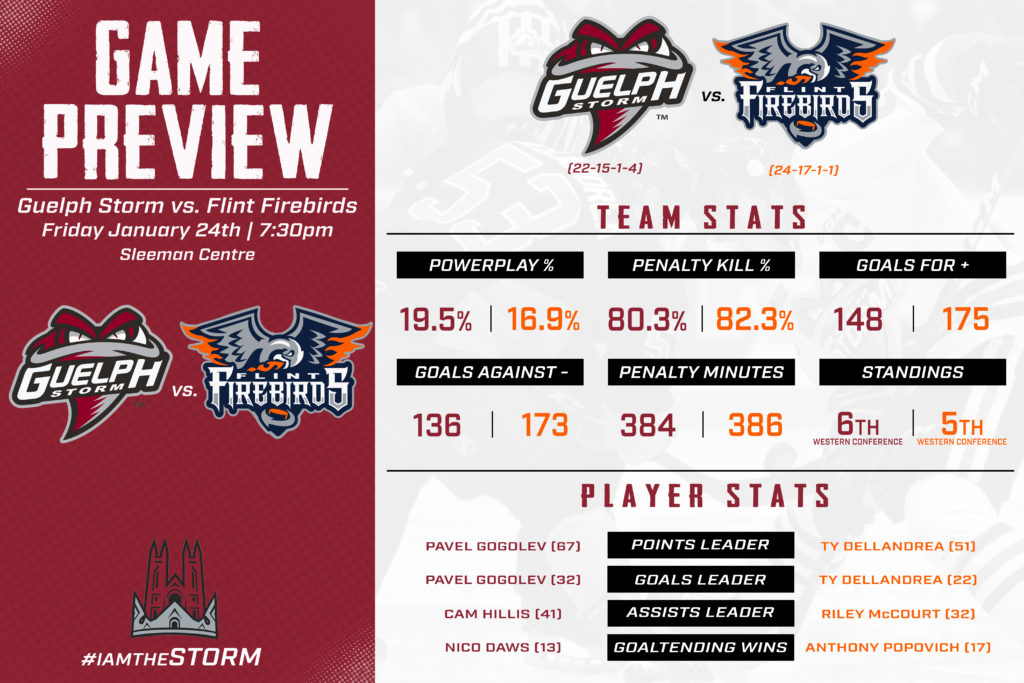 The Flint Firebirds visit the Sleeman Centre on Friday evening to take on the Guelph Storm at 7:30pm. This is the first of back to back games against each other with both teams battling for playoff positioning.

The Guelph Storm are looking to snap their current 7 game losing streak and get back on track Friday night, which is the first of their 3in3 weekend games. Guelph has been outscored 21-36 over their losing skid and are now sitting in 6th place in the Western Conference.

The Flint Firebirds have won 2 straight games and are heading into their home and home against the Storm in 5th place in the Western Conference after winning 7-4 vs. Soo Greyhounds on Wednesday night.

Get tickets to Flint at Guelph

The Guelph Storm have 3 current players drafted to NHL clubs including: Cam Hillis (MTL – 3rd Round) , Fedor Gordeev (TOR – 5th Round. Traded to MIN) and  Martin Has (WSH – 5thRound).

Guelph will travel to Flint on Saturday to wrap up their home and home with the Firebirds before heading to London on Sunday for an afternoon game to finish off their 3in3 weekend. The Storm are on the road next week as well with games in North Bay on Friday and Sudbury on Saturday to finish off the month of January. Guelph returns home on Wednesday February 5th against the Erie Otters at 7:00pm.

Get Tickets to upcoming Storm games