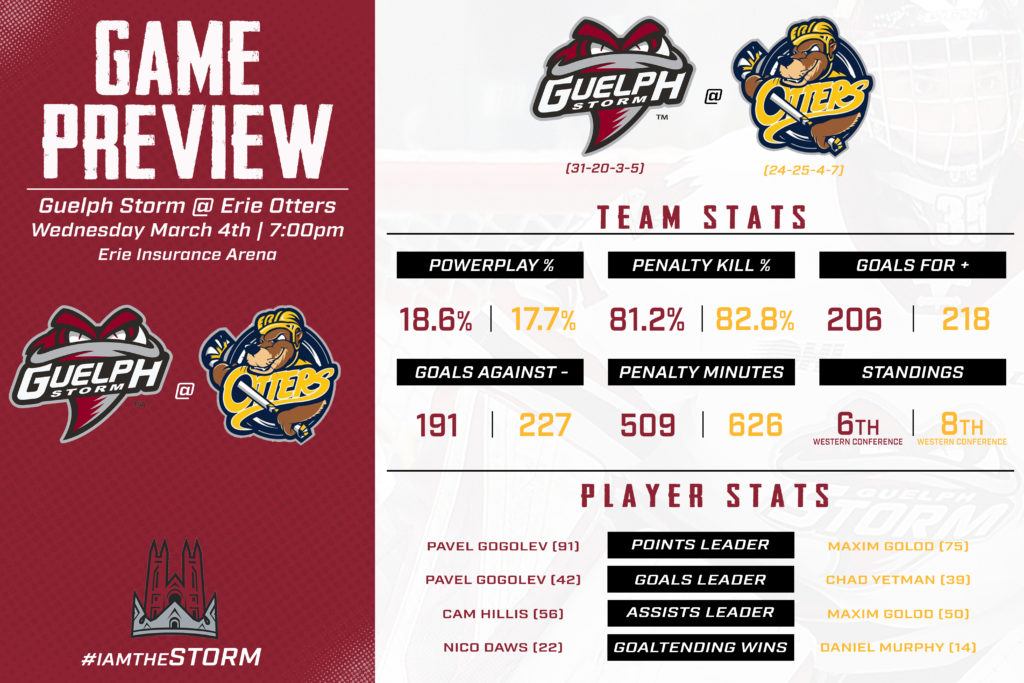 The Guelph Storm travel to Erie to face the Otters this evening for their first of 3 games this week. Puck drop is at 7:00pm.

The Storm are looking to bounce back after a tough loss to the Windsor Spitfires last Saturday, and look to catch up the Spitfires in the standings as the Storm sit in 6th place in the Western Conference with 70 points.

The Otters are on a 4 game losing streak coming into Wednesday night, and are looking to separate themselves from the Soo Greyhounds for the final playoff spot on the West.

Guelph returns home Friday night to take on the Oshawa Generals at 7:30pm. Friday is also the ‘Pick Up the Tab’ night at the Sleeman Centre as fans are asked to bring in their can tabs they have been saving all season. Guelph then travels to Sarnia on Sunday afternoon to take on the Sting to wrap up their week(end) of games.

Pick Up the Tab

Pick Up the Tab is back! Time to bring in can tab collections this Friday March 6th at the Sleeman Centre when the Guelph Storm host the Oshawa Generals, 7:30 p.m.

The Guelph Storm and Sleeman Breweries ask the fans to collect can tabs for Elora Legion Branch 229 “Tabs for Wheelchairs” program. Monies raised from recycled tabs will go towards purchasing new wheelchairs, motorized scooters and walkers across Canada. Tabs can be dropped off at collection receptacles at the game.

Tabs for Wheelchairs started over 30 years ago with members of the Elora Legion and to date they have provided almost 3,000 wheelchairs. Aluminum tabs are 100% recyclable and come from a variety of cans and other consumer goods. Only aluminum can be used by Tabs for Wheelchairs and fans can check because it is a nonferrous material, meaning it will not stick to a magnet.

John Sleeman, Founder and Chairman of Sleeman Breweries, has been an avid tab collector donating to Tabs for Wheelchairs. “We are excited to hear that many members of community are embracing Pick Up the Tab and enlisting others to collect with them. Leading up to this game, we have heard fantastic stories from families, offices, service clubs, local condos, retirement homes, schools and more rallying to build their tab collection. We want to keep tabs out of landfills and recycle the aluminum to support a cause that will help so many people”.

Wade Patterson-Grigsby, age 7, is one local example of spearheading a tab collection amongst his classmates at Westwood Public School. The School’s campaign started in November when Mrs PIercey who runs the “Green Hornets” environmental club saw that the Guelph Storm was collecting for the Elora Legion’s Tabs for Wheelchairs. After the announcement about the campaign, one of the grade 2 students, Wade brought in a water cooler bottle FULL of tabs. It was a project his sister Raynah started with her Dad back in 2007 and in 2015 Wade took it over with his Dad. He brought the bottle in with a note telling about the collection and saying “Please accept this small token towards your wheelchair campaign.” Wade later stood before the school to show everyone his collection and to encourage students to collect. With the visual of so many tabs and Wade’s encouragement, students started bringing in tabs every day. Teacher Librarian Carla Warnholz says “not only are they bringing in the tabs but they have become aware of the concept of recycling for a purpose – in this case wheelchairs”

Wade will be joining representatives from the Elora and Cooksville Legion, Sleeman Breweries and Benmet Steel on the ice for the puck drop to start Friday’s game.

The Sleeman Pick Up the Tab night will also feature a Fan Puck Toss with various prizes and all proceeds will go to the Elora Legion. Sleeman Breweries will match all dollars raised by the Puck Toss.