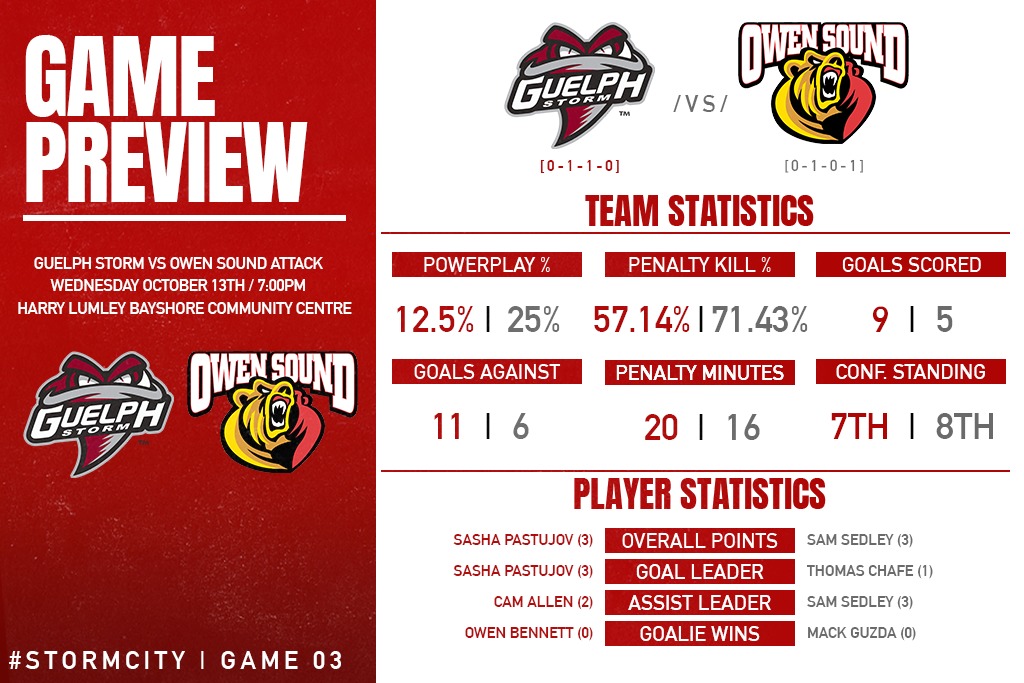 The Storm head to the Harry Lumley Bayshore Community Arena in Owen Sound to take on the Attack for game #3 of the season. The puck drops at 7:00pm.

The Storm coming off two hard fought losses will be looking to come out hot tonight and get their first win of the season. After a 6-5 OT loss and a 5-4 loss both to the Kitchener Rangers, the Storm now have a record of 0-1-1-0. Following a hat trick night from newest Storm Sasha Pastujov, and a 2 assist night for both Daniil Chayka and Danny Zhilkin, the team will look to continue the scoring against the Attack. With a 3-way tie for lead in points, expect Jake Karabela and Braeden Bowman to continue the production, while Sasha Pastujov continues to find the net.

The Attack are also coming off two losses to start their season coming at the hand of the London Knights, who were able to beat them 3-2 SO and 4-3 in the opening two games. With the lead of scoring shared between 5 players Owen Sound will look to continue their scoring depth tonight at home. Sam Sedley has had an impressive start to the season with 3 assists in the Attack’s first two games, look for him to continue the point streak against Guelph. The Attack sit tied in points with the Storm with a 0-1-0-1 record.

Both teams will be hungry for their first win of the season tonight which will make for an exciting first matchup of the season between the Storm and Attack.

After an impressive performance in the 5-4 loss to the Kitchener Rangers, Pastujov was able to put 3 by the Rangers net minder to get himself a hat trick in only his second OHL game. Playing on the top line with Danny Zhilkin, Pastujov will be poised to continue his offence tonight in Owen Sound.

Within two games Sedley put up a total of 3 assists, which leads the team in points and assists. Coming off a hot start against London, Sedley will continue to find his teammates for goals and continue to add up those assists. After only registering 7 total points in his first OHL season Sedley will be trying to continue to get points after the impressive start.

The Guelph Storm are back home Friday October 15th as the Soo Greyhounds come to the Sleeman Centre. Puck drops Friday @ 7:30pm. For tickets to this Friday’s home game: https://tickets.guelphstorm.com/events/17343-ssm-greyhounds-vs-guelph-storm