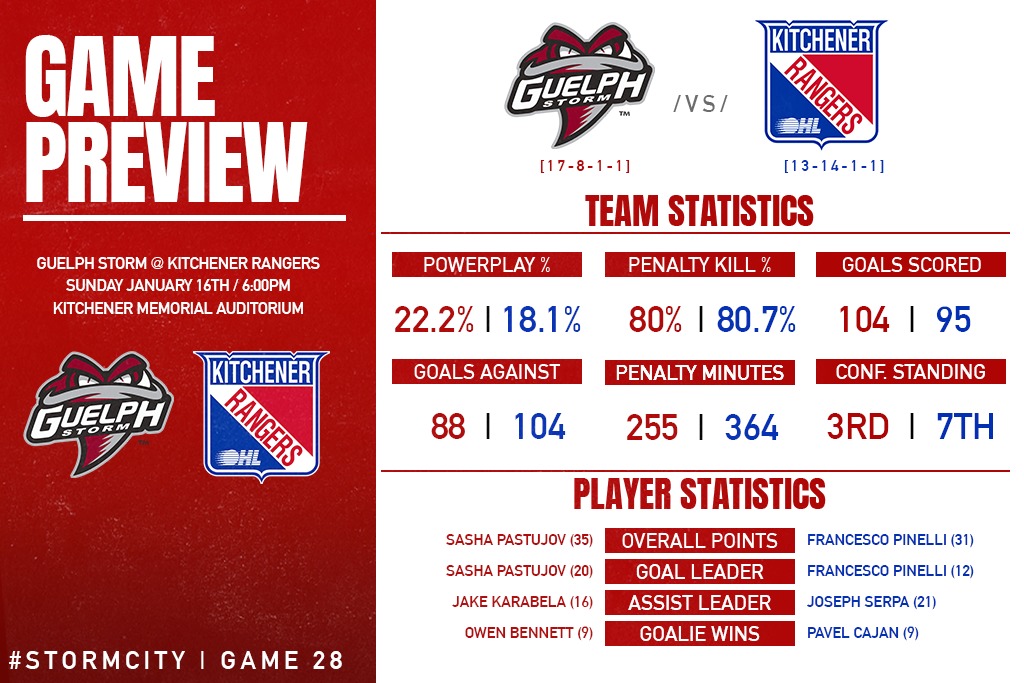 The Storm are finally back in action after a long winter break as they head to Kitchener to take on the Rangers. The puck drops at 6:00pm.

After many tries the Storm finally get back into action tonight against their Highway 7 rivals as they head to the Aud for tonight’s game. The last time the Storm played was December 18th when they beat the London Knights 4-1. The newest additions to the team, Brayden Guy and Ashton Reesor will make their debut tonight making tonight’s game a must watch. The Storm through 27 games is 17-8-1-1 and sit in 3rd place in the conference standings. Tonight, should be a great game as the team will be excited to get back into action.

In his 4th OHL season Brayden Guy has played a key role with the Sting putting up 11 points in 21 games. As he makes his Storm debut tonight his goal totals sit at 6 and assists at 5. Guy will want to make an instant impact with his new team so watch out for him tonight as the Storm take on the Rangers.

Pinelli drafted by the LA Kings in the 2nd round of the 2021 draft, has proven he’s the Rangers top guy. His 31 points in 27 games leads the team in points and his 12 goals is also good enough for the team lead. He is someone to look out for tonight as the Storm go visit the Rangers.

The Storm are back at home Tuesday, January 18th when the Flint Firebirds come to town for a 7:00pm puck drop.