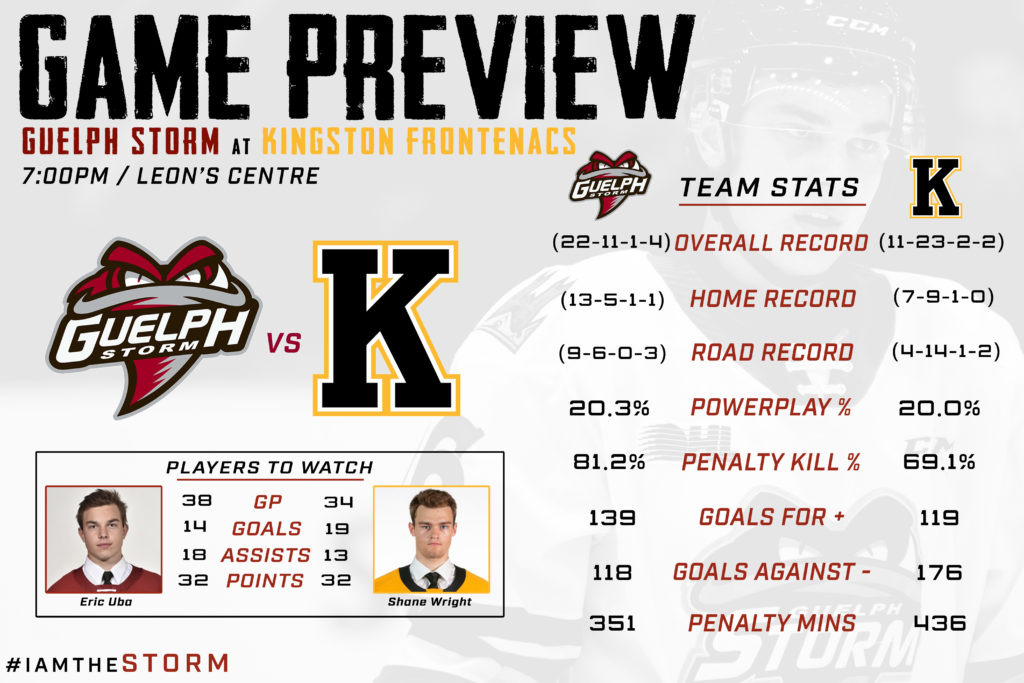 Guelph travels to Kingston to face the Frontenacs on Saturday evening and look to get back on track after losing to the 67’s on Friday night 9-6. Guelph comes into Saturday evening in 5th place in the Western Conference with 49 points.

Kingston is coming into Saturdays game in 9th place in the Eastern Conference with 26 points and are looking to continue their win streak after beating the Attack on Friday night 3-2 in a shootout.

Eric is enjoying a strong season with the Guelph Storm thus far with 14 goals and 32 points through 38 games played. Uba has 5 goals and 9 assists in his last 10 games and is going to be a key contributor for the Storm making a playoff push.

Newly turned 16 year old Shane Wright is having a great underaged season for the Kingston Frontenacs with 19 goals and 32 points in 34 games played thus far. Shane has 13 goals in his last 18 games and is 2nd on the team in goals scored.

Guelph will return home for their matchup against the Owen Sound Attack on Friday January 17th at 7:30pm and will also play against the Kitchener Rangers at the Sleeman Centre on Saturday January 18th at 7:00pm. Guelph then plays and afternoon game in Kitchener on Sunday January 19th at 2:00pm to wrap up their 3in3 weekend.