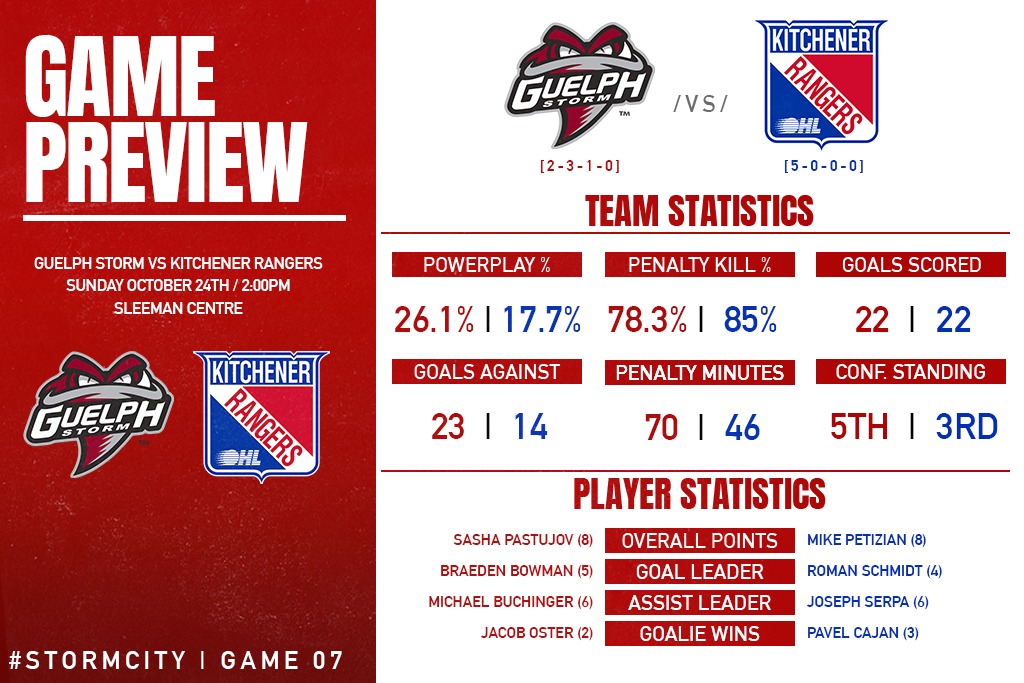 The highway 7 rivalry is back in Guelph this afternoon as the Kitchener Rangers visit the Sleeman Centre to take on the Storm. The puck drops at 2:00pm.

The Storm coming off a tough win against the Sarnia Sting will be keeping their energy coming into the fourth installment of the highway 7 rivalry. With goals coming from Sasha Pastujov and Braeden Bowman the Storm were able to beat the Sting 2-1, this came with the help of an impressive performance in goal from Jacob Oster. The Storm coming into tonight will be looking to get their first win against the Rangers after falling just short in the first three meetings. Currently sitting 5th in the standings after Friday night’s win, the Storm are in a good spot with the opportunity to climb the standings more. Improving to a 2-3-1-0 record the Storm are trying to put an end to the Rangers undefeated start to this OHL season this afternoon and is shaping up to be a game not to miss.

The Rangers will be confident coming into town as the last time they played in the building they were able to walk away with a 5-4 win. Kitchener is also coming off a win against the Windsor Spitfires, who were beaten 3-2 in a shootout with defenceman Roman Schmidt tallying another goal. His 4th goal of the season gives him the lead for goals on the team so watch out for him this afternoon. The Rangers are currently 5-0-0-0 and are coming to Guelph looking to stay undefeated.

After being named an A prospect by NHL Central Scouting earlier in the week its safe to say people already have their eyes on Poitras. In his rookie season he’s been able to record 3 goals and 4 points in the 6 games so far. This is a solid start for Poitras and make sure to keep your eyes on him tonight as the Rangers come to town.

Leading the team in goals for a defensemen speaks for itself, Schmidt is a dynamic defensemen who can play in the offensive zone. Finding early success the Tampa Bay Lighting prospect will be looking to continue his impressive performances in the scoring column. Keep an eye out for him tonight as he comes to Guelph looking to help his team stay undefeated.

The Storm are back at home October 29th when the Owen Sound Attack come to visit the Sleeman Centre. Get your tickets here. https://tickets.guelphstorm.com/events/17345-owen-sound-attack-vs-guelph-storm