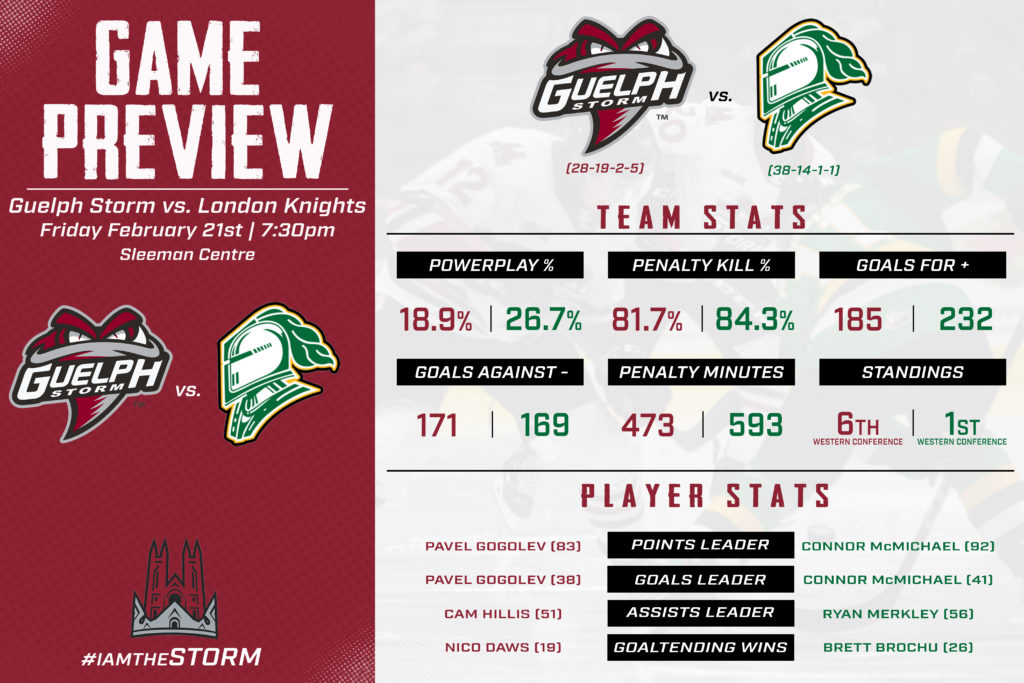 The Guelph Storm host the London Knights on Friday evening for their first of 2 games this weekend. Puck drop is at 7:30pm.

Coming into their weekend of games, the Storm sit in 6th place in the Western Conference with 63 points and are 4-0-1-1 in their last 6 games. Guelph sits 6 points behind the Windsor Spitifires for 5th place in the conference and are 4 points ahead of Owen Sound who sit in 7th place.

The London Knights clinched a playoff spot last night after defeating the Windsor Spitifires 4-2 and are 1st in the Western Conference with 78 points. The Knights have won 4 straight and are 17-2 since the beginning of January, with one of their losses coming from the Guelph Storm last week.

Get tickets to Guelph vs. London

Pavel Gogolev is enjoying a fantastic season for the Guelph Storm with new career highs in goals (38), assists (45) and points (83). Since being traded to the Storm last year, Pavel has 41 goals and 51 assists for 92 points in 62 games and has scored 21% of the teams goals this season.

Drafted by the Washing Capitals in the 1st round (25th overall) in last years NHL draft, Connor has set new career highs in goals (41), assists (51) and points (92) so far this season in 44 games played. Connor is 4th in the league in total points and 3rd in the league in goals scored.

The Storm return home on Sunday afternoon against the Niagara Ice Dogs at 2:00pm before they head to London on Wednesday night for a 7:00pm game. Guelph hosts the Erie Otters next Friday February 28th at 7:30pm.