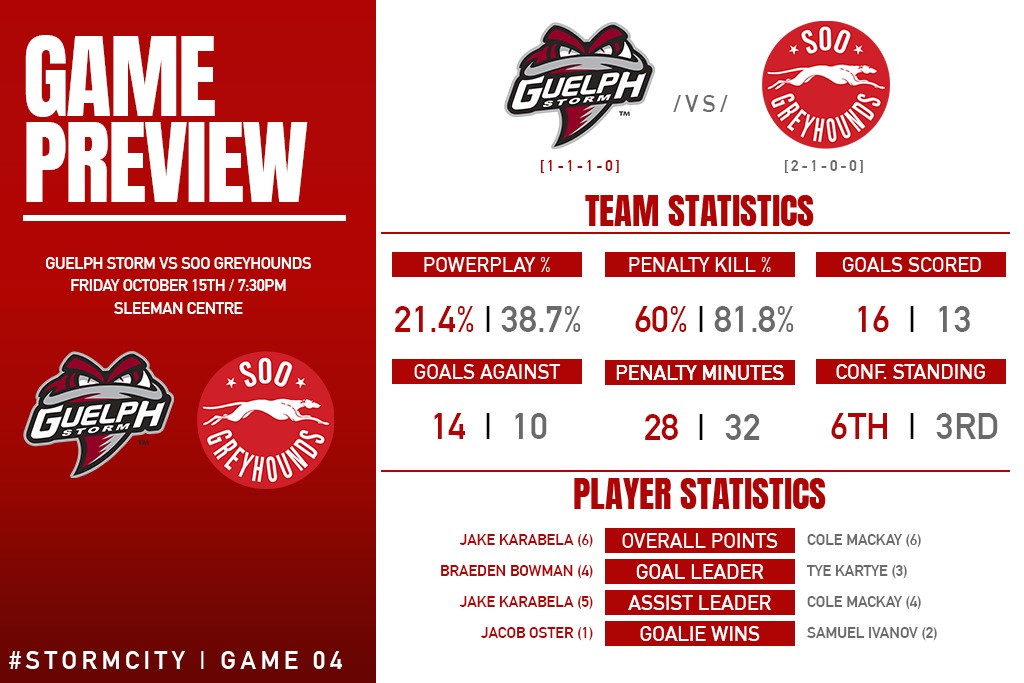 The Storm host the Soo Greyhounds at the Sleeman Centre tonight in the first matchup between these two this season. The puck drops at 7:30pm.

The Storm coming off of an impressive win midweek against the Owen Sound Attack will come into tonight feeling confident with their game and will look to continue the winning. After scoring 7 goals Wednesday night the team will be ready to come into tonight’s game looking for more of that scoring success. Impressive performances from Michael Buchinger and Jake Karabela who each provided the team with 3 assists Wednesday night are poised for more success in the coming games. Braeden Bowman and Marko Sikic were both able to find 2 goals against the Attack, which makes Bowman the leading scorer on the team with 5 goals. The Storm will be ready to continue the winning tonight at home against the Soo.

The Soo Greyhounds come to Guelph on the second half of a back-to-back after playing in Barrie against the Colts last night. The Greyhounds were able to find success in Barrie and won 6-3, after a successful night they will be looking to come to Guelph and find another win against the Storm. Last night’s stand out player, Tye Kartye, scored a hat trick and line mate Cole MacKay foudn the net once and helped set up 3 against the Colts. Both players coming off impressive nights will look to continue their success tonight in Guelph.

After an impressive 3 assist performance on Wednesday the Storm centre-man will look to continue putting up points for his team. Currently leading the team in points Karabela and his impressive 6 points in 3 games will be a stand out player to watch coming into tonight.

After recording a hat trick in last nights game in Barrie, Kartye is coming to Guelph looking to continue the scoring and help his team leave tonight with a win. He will definitely be a player to watch tonight coming off of a hot performance with the goal of doing it again tonight.

The next Storm home game is on Sunday, Oct. 24, when the Kitchener Rangers come back to Guelph for the fourth meeting between the two teams. Make sure to get your tickets early, it will be a game you won’t want to miss! Get your tickets here!