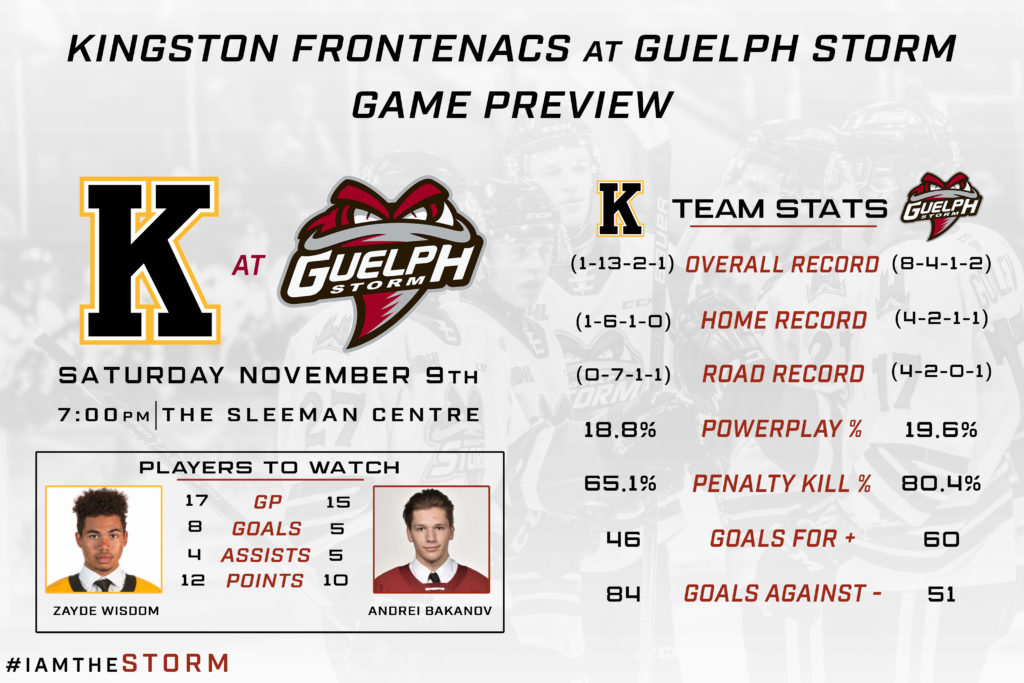 The Guelph Storm welcome the Kingston Frontenacs to the Sleeman Centre on Saturday evening at 7:00pm.

Guelph had an up and down start the season, but have since won 5 consecutive games and have outscored their opponents 29-13. Guelph is heading into Fridays game in 6th place in the Western Conference and are looking to move into the 4th spot with a win against Kingston. Guelph is being led upfront by Pavel Gogolev and Cam Hillis who are both well above a point per game this season, and Nico Daws is one of the top goalies in the OHL this season with a 6-1-1-2 record.

Kingston has had a tough start to the season thus far, and are currently on a 10 game losing streak heading into Fridays matchup against the Storm. Kingston finished in last place in the OHL last season and drafted exceptional status player Shane Wright. Kingston has had a tough time keeping pucks out of their net this season and have been outscored 46-84 through 17 games played. Kingston could use some improvements in their special teams as they are last in penalty killing and 17th in power play.

Andrei Bakanov was drafted by the Guelph Storm 38th overall in the 2019 import draft and has had a strong start to the season with 5 goals and 10 points through 15 games this played. The 6′.02″ 220lbs winger is looking to continue his strong play as a high ranked prospect for the upcoming 2020 NHL entry draft.

Zayde Wisdom finished his rookie season with 10 points in 60 games last season, but has 8 goals and 12 points through 17 games played this season. The Toronto native is looking to continue his strong play and help the Kingston Frontenacs get back to their winning ways.

The Guelph Storm are proud to unveil plans for the team’s annual Veterans’ Week game on Saturday, November 9th vs. the Kingston Frontenacs. In addition to a special pre-game ceremony in partnership with Guelph’s Royal Canadian Legion Colonel John McCrae Memorial Branch 234, the Storm will be wearing one-of-a-kind jerseys to commemorate the Guelph Armoury.

Guelph’s Amoury is located in downtown Guelph and only a short distance from the Sleeman Centre.  The Armoury stands tall because of its prominent location and conspicuous appearance making it a familiar local landmark in the Royal City and remains a constant reminder of our city’s proud involvement in Canada’s Armed Forces dating back to it’s construction in 1906-07.  Guelph’s Armoury is closely associated with the reform and expansion of the Active Volunteer Militia from 1886 to 1911. The reforms transformed the militia from a citizen militia into an efficient military force prepared for action when the First World War broke out. Guelph’s Armoury was used as both a training and recruitment centre during the ‘Great War’.  Well over a century later, the Armoury continues to operate as a Canadian Forces armoury.

Guelph will return to action on Friday November 15th as the Owen Sound Attack visit the Sleeman Centre at 7:30pm. Guelph will then take on the Saginaw Spirit on Saturday afternoon to wrap up their weekend of games.

Get tickets to upcoming games