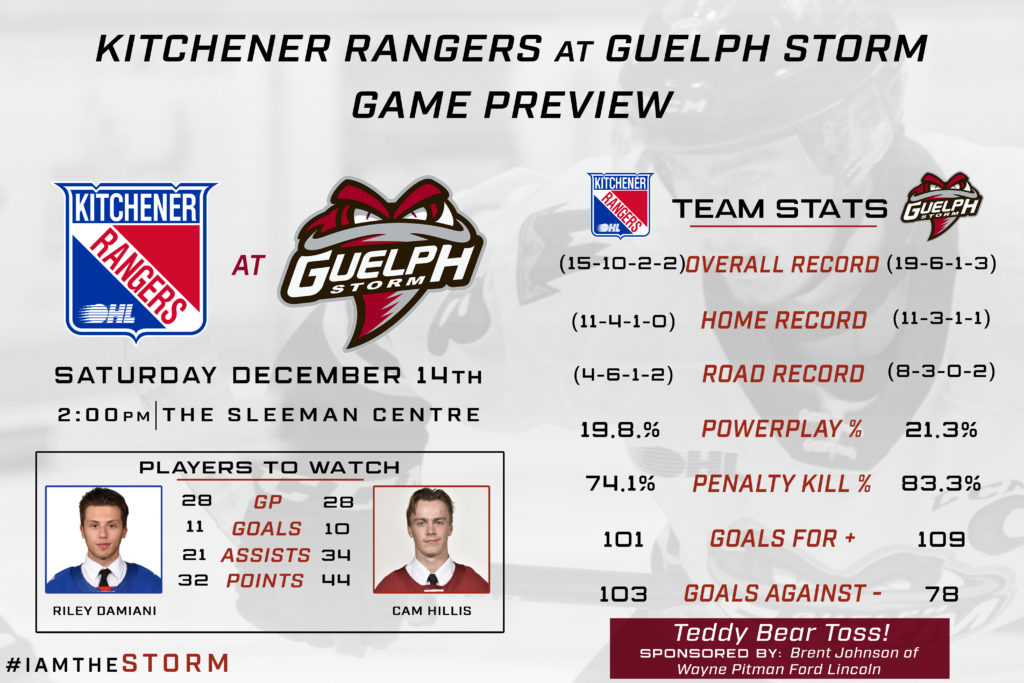 The Guelph Storm welcome the Kitchener Rangers to town on Saturday afternoon for their annual teddy bear toss game at 2:00pm.

The Storm opened their 3in3 weekend with a 6 -3 win against the Windsor Spitfires on Friday evening. Guelph’s record improves to 4-2 in the month of December heading into Saturday game against the Rangers, and remain in 1st place in the Western Conference.

The Kitchener Rangers have been on a roll as of late winning 8 straight heading into Saturday’s matchup. Kitchener has outscored their opponents 36-20 during their hot stretch and sit in 6th place in the Western Conference.

Get tickets to Kitchener vs. Guelph

The Guelph Storm have 2 players on their roster who have been drafted to an NHL club including captain Cam Hilllis (MTL – 3rd Round) and defenceman Fedor Gordeev (MIN – 5th Round).

Saturday, December 14th, is the annual Teddy Bear Toss game sponsored by Brent Johnson of Wayne Pitman Ford Lincoln at the Sleeman Centre as the Storm host the Kitchener Rangers at 2pm.

Last year the teddy bear goal was scored by forward Barret Kirwin at the halfway point of the first period.  Kirwin’s goal brought on a storm of over 3,500 stuffed animals onto the ice!

As we get ready for Saturday’s game, here are some Teddy Bear Toss Facts…

– Over 18 seasons, the Storm has collected over 54,500 new, or ‘slightly loved’ stuffed toys that have been donated to charities in Guelph and around the world.

– The earliest Storm goal recorded on a Teddy Bear Toss night in Guelph was in 2009 when Matt Sisca scored at 1:13 of the first period.

– The Storm were held scoreless only once on Teddy Bear Toss night, December 2nd, 2002 against the Brampton Battalion (4-0).

Guelph will wrap up their 3in3 weekend with a visit to Oshawa to face the Generals on Sunday evening at 6:05pm. Guelph will then enjoy a holiday break before returning to the ice on Saturday December 28th as they visit Peterborough to take on the Petes. Guelph will return home on Sunday December 29th at 7:05pm as they face the Hamilton Bulldogs at the Sleeman Centre.