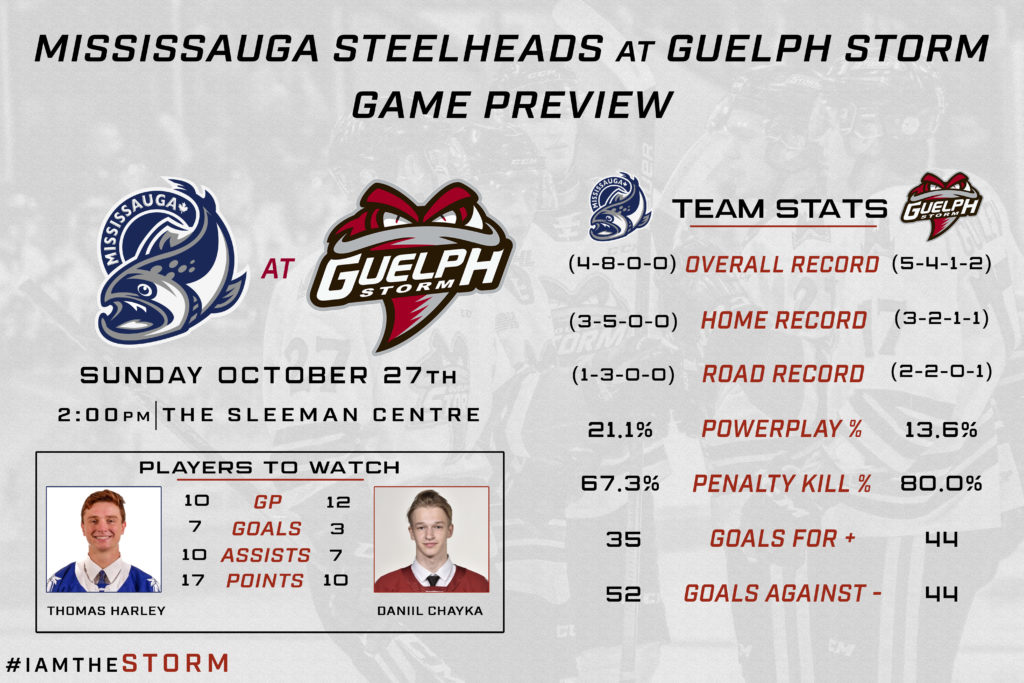 The Guelph Storm have had an up and down start to the season thus far posting a 5-4-1-2 record through the opening 12 games of the season. Guelph is currently battling for the 7th-8th spot in the Western Conference and will look to build off their shootout win against the Erie Otters earlier this week and a 9-3 win against the North Bay Battalion on Friday evening.) Goaltender Nico Daws has had a tremendous start to the season and is top 5 in GAA and SV% thus far. Pavel Gogolev and Cam Hillis are leading the team offensively and will be relied upon to continue their strong starts to get the Storm into the post-season.

The Guelph Storm have 2 players drafted to NHL teams that include captain Cam Hillis (MTL – 3rd Round) and Fedor Gordeev (TOR – 5th Round, traded to MIN)

The Mississauga Steelheads have started the season with a 4-7-0-0 record through 11 games played. The Steelheads have been outscored 52-34 in those games, and will need to improve their defending and goaltending to give them an opportunity to make the playoffs. Mississauga is battling for the final playoff spot in the Eastern Conference and a win against the Guelph Storm would help expand the gap between 8th place and 9th place.

The Steelheads have 3 players drafted to NHL teams including Thomas Harley (DAL – 1st Round), Cole Schwindt (FLA – 3rd Round) and Keean Washkurak (STL – 5th Round).

Daniil Chayka was drafted by the Guelph Storm in the 1st round, 7th overall in the 2018 OHL draft. Chayka had a good rookie season with the team and collected 14 points in his first season and played in 20 playoff games during the Storms championship run. This season, Daniil has taken over as the Storms leader on defence and has scored 3 goals and 10 points in only 12 games played.

Thomas Harley was drafted in the 2019 NHL draft by the Dallas Stars 18th overall in the 1st round. Harley is in his 3rd OHL season with the Steelheads and is well above pace to beat his previous career highs in goals (11) and assists (47) and points (58).

Sunday’s game between the Storm and the Mississauga Steelheads is Brent Johnson of Wayne Pittman Ford’s annual Food Drive in support of the Guelph Food Bank and Spyke’s annual “Halloween Bash”.

If donating non-perishable food items, volunteers will be on hand to collect your much needed food items or cash donations in support of the Guelph Food Bank.

Last year with all that was collected, along with some cash donations over 1,700 meals were provided for the Guelph Food Bank.

Spyke is reminding young Storm fans attending the game to JOIN HIM in wearing a Halloween costume!

Kids in costume are invited to do Trick or Treating throughout the Sleeman Centre during the game with Halloween candy available at Spyke’s Sports outside Gate 6, Spyke’s Shop on the arena concourse behind section 115, the Guelph Storm information table, plus the Storm box office and the Sleeman Centre box office.

PLUS… during the second intermission, mascots Spyke and Stormy will be leading the HalloweenParade across the ice with more treats for fans in costume.

For fans attending the game and participating in the Halloween Parade, Spyke and the Storm Crew will meet parents and kids on the main concourse level at the top of SECTION 103 with six minutes remaining in the second period.

And finally, the person with the BEST COSTUME will be given a $50 gift card to Spyke’s Sports Shop!

Come on out to join Spyke for his Halloween Bash!!