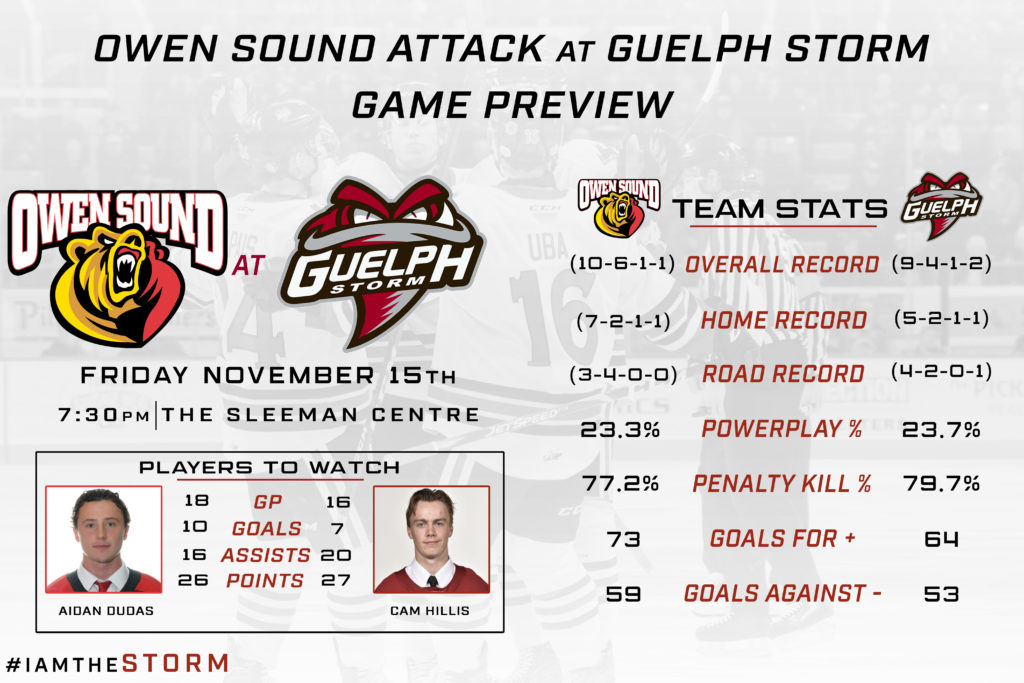 The Guelph Storm and the Owen Sound Attack face-off on Friday evening at 7:30pm at the Sleeman Centre.

Get Tickets to Owen Sound Attack at Guelph Storm

The Storm are heading into the weekend on a 6 game win streak after a couple of wins last weekend against the Kitchener Rangers and Kingston Frontenacs. The Storm have outscored their opponents 29-15 on their current 6 game winning streak with Cam Hillis leading the way with 3 goals and 14 assists during that time. Guelph is heading into Fridays matchup in 7th place in the Western Conference with a 9-4-1-2 record.

Owen Sound is looking to get back on track after losing in Barrie to the Colts 8-5 last night. Owen Sound is currently in 5th place in the Western Conference with a 10-6-1-1 record and will look to jump ahead of teams in front of them with a win against the Storm.

The Montreal Canadiens 3rd round draft pick Cam Hillis has been on fire after a slow couple games to start the season. Cam has scored 24 points in his last 9 games played including 18 assists in that time span. Cam is well on his way to setting new career highs in goals (20), assists (29) and points (59) this season and is averaging over 1.5 points per game.

Drafted by the L.A. Kings in the 4th round of the 2018 NHL entry draft, Aidan Dudas has put up strong numbers again this season with 10 goals and 26 points through 18 games thus far. Aidan is also on track to set new career highs in goals (31), assists (36) and points (65) and is averaging slightly less than 1.5 points per game.

The Storm host the Saginaw Spirit at 4:00pm on Saturday afternoon at the Sleeman Centre as the Storm organization host their 2nd annual ‘First Responders Appreciation Night” as well as celebrating long time equipment manager Russ ‘Rusty’ Hammond’s recent retirement after being with the Storm organization for all four of their OHL championships.

Get tickets to Saginaw at Guelph here