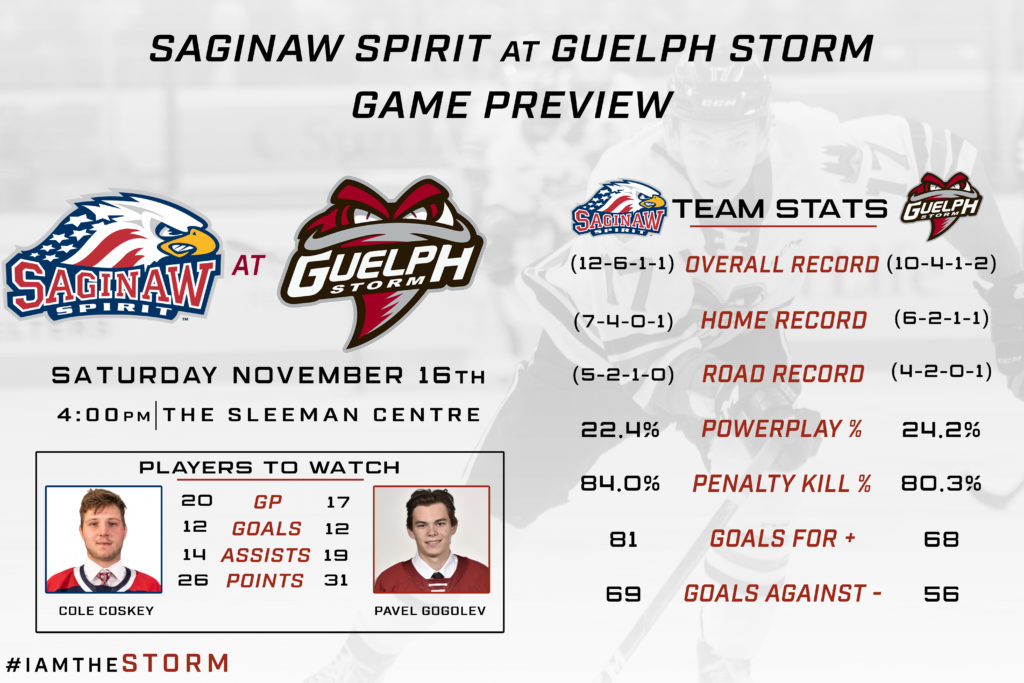 The Storm host the Saginaw Spirit at 4:00pm on Saturday afternoon at the Sleeman Centre as the Storm organization host their 2nd annual ‘First Responders Appreciation Night” as well as celebrating long time equipment manager Russ ‘Rusty’ Hammond’s recent retirement after being with the Storm organization for all four of their OHL championships.

Get tickets to Saginaw vs. Guelph

The Storm head into Saturday’s game on a 7 game win streak after defeating the Owen Sound Attack on Friday night. Captain Cam Hillis and Russian sniper Pavel Gogolev have led the Storm offensively through 17 games this season with both players on track to set new career highs. Goaltender Nico Daws has been exceptional this season and is top 5 in most goalie categories with a 7-1-1-2 record.

The Guelph Storm have 2 players drafted to NHL teams that include captain Cam Hillis (MTL – 3rd Round) and Fedor Gordeev (TOR – 5th Round, traded to MIN).

Pavel Gogolev has been exceptional this season for the Storm scoring 12 goals and 31 points through 17 games. Gogolev is averaging over 1.5 points per game this season and should easily pass his previous career highs in goals (30) and points (47.)

Guelph will head to Kitchener on Tuesday November 19th to take on the Rangers at 7:00pm before they return home on Friday November 22nd to face the Sarnia Sting at the Sleeman Centre, with puck drop at 7:30pm.

Get Tickets to upcoming home games

adopt-a-school Articles
Served by the Storm is back for 2020!
4 days ago

Bowl up a Storm - Sunday February 2nd
4 days ago