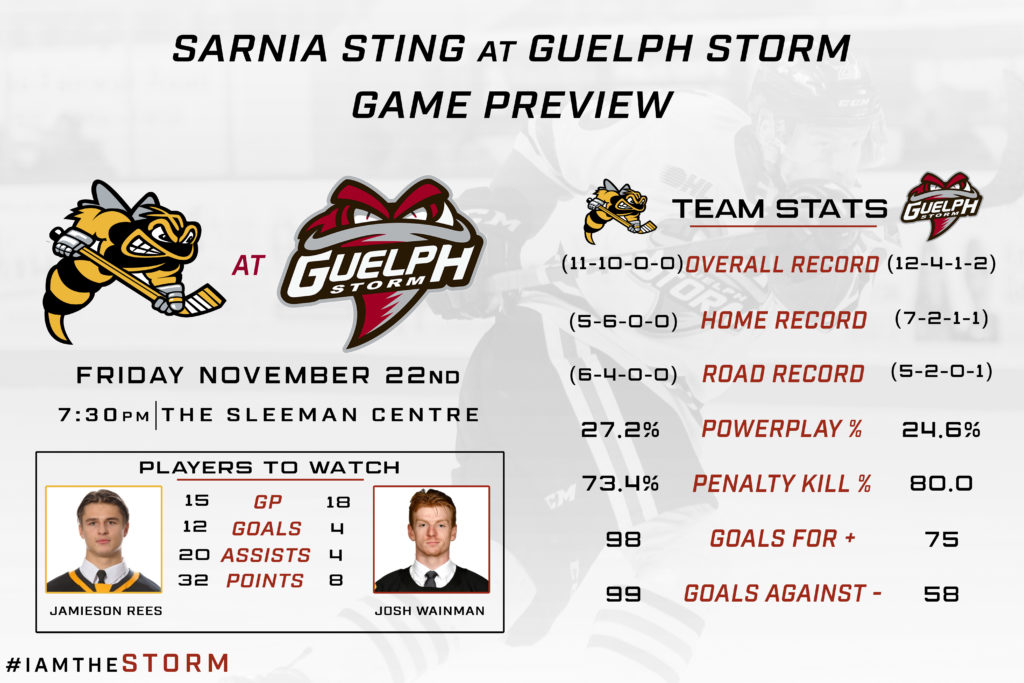 The Sarnia Sting visit the Sleeman Centre on Friday November 22nd to face the red hot Guelph Storm at 7:30pm. Friday is Pink the Rink night at the Sleeman Centre sponsored by SkyJack and there will be limited edition ‘Pink the Rink’ Storm shirts available for Fridays game with all proceeds going to Canadian Cancer Society Waterloo-Wellington in support of Cancer Research.

Get tickets to Sarnia at Guelph

Guelph heads into their weekend of games on a 9 game winning streak after beating the Rangers 5-1 on Tuesday night in Kitchener and improving their record to 12-4-1-2 on the season. Sarnia had a tough start to the season but are now 7-3-0-0 in their past 10 games played and are looking to add to their one game win streak after defeating the Flint Firebirds on Wednesday 6-4.

The Storm have won 9 consecutive games heading into Friday night with much of their success coming from the strong play of goaltender Nico Daws who has 8 wins and a 0.936 SV% over his past 8 starts which includes a shutout win against the Mississauga Steelheads. The Storm have been led offensively by Cedric Ralph (6 game goal streak), Keegan Stevenson (6 goals, 9 points), captain Cam Hillis (4 goals, 20 points) and Pavel Gogolev (7 goals, 19 points) during their  9 game winning streak. Defenceman Fedor Gordeev has 10 assists in his last 9 games and overage defender Josh Wainman has 4 goals in his past 5 games heading into Friday. With their winning streak the Storm currently sit in 2nd place in the Western Conference with 27 points on the season.

The Sting had a very tough start to the season losing 7 straight games and being outscored 26-46 in that stretch. Since mid October, Sarnia has a 11-3-0-0 record while outscoring their opponents 72-53 during that time with Sean Josling leading the team with 21 goals and 42 points. Forwards Jamieson Rees (12g, 20a), Ryan Roth (11g, 17a) and Jacob Perreault (9g, 13a) have led the team offensively this season and will be looked upon to continue their early season success to get the Sting in the post-season.

Josh Wainman was acquired by the Storm in late September from the Hamilton Bulldogs and has enjoyed success with the team thus far through 18 games. Josh is on pace to set a new career high in assists and points this season as he has already tied his previous career high in goals with 4. Josh has scored his 4 goals this season in the past 5 games and has been a strong contributor to the teams 9 game winning streak.

Jamieson Rees is heading into Friday’s matchup on a 14 game point streak with 12 goals and 32 points during that span. Rees was drafted by the Carolina Hurricanes in the 2nd round of the 2019 NHL draft and has already set a career high in goals and is on pace to more than triple his previous career highs in assists and points.

The Guelph Storm are proud to present this year’s annual Pink the Rink night, presented by Skyjack in support of the Canadian Cancer Society Waterloo-Wellington branch. The Storm will host the Sarnia Sting on Friday, November 22nd at 7:30PM at the Sleeman Centre for an evening of exciting hockey that will be fun for the whole family, all while supporting a great cause.

The Storm are proud to welcome Skyjack as our Pink the Rink sponsor, and would like to extend our thanks for their support of this wonderful cause. Pink the Rink will feature a pre-game ceremony featuring Skyjack’s SJ46 AJ and in-arena fundraisers with all funds raised going to the Canadian Cancer Society Waterloo-Wellington. The game will also have the first 3,000 fans receive a free fandana.

Over the last six seasons, dating back to 2013, the Guelph Storm and Skyjack have together raised over $46,000 for the Canadian Cancer Society.

Again this year, fans are encouraged to wear pink clothing in support of cancer research and awareness. On November 22, be sure to come on out and cheer on the Storm, and support this year’s Pink the Rink initiative!

Click here to purchase tickets to Pink the Rink on Friday, November 22.

The Canadian Cancer Society is a national, community-based organization of volunteers whose mission is the eradication of cancer and the enhancement of the quality of life of people living with cancer. Read more here.

The Storm head to Hamilton to take on the Bulldogs on Saturday November 23rd at 4:00pm to wrap up their week(end) of games. Next week, Guelph plays an early afternoon game in Mississauga on Wednesday November 27th at 11:00am before returning home to face the Saginaw Spirit on Friday November 29th at 7:30pm.

Get tickets to upcoming games