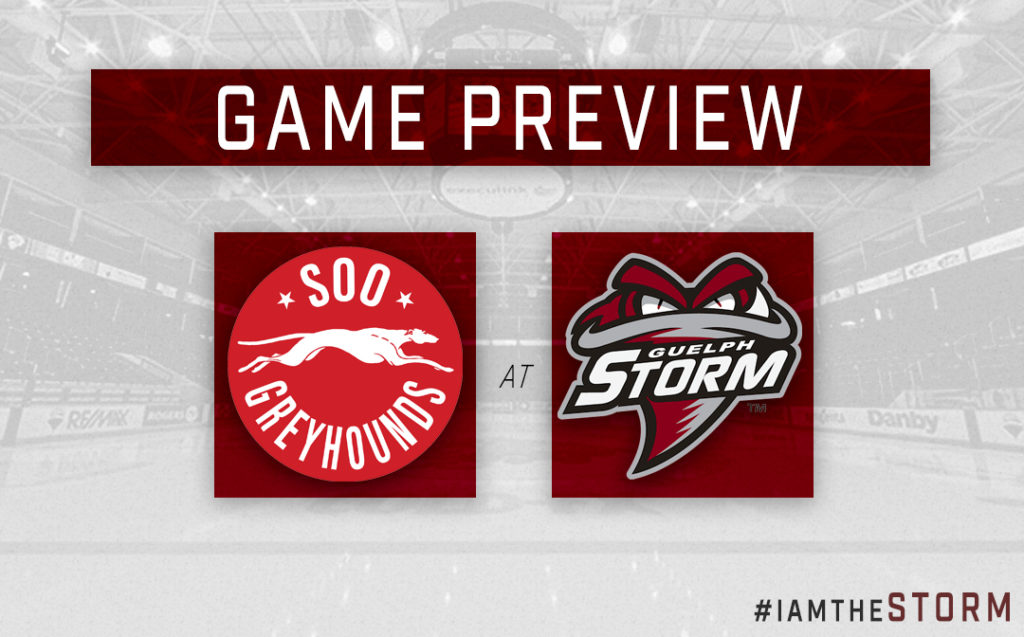 The Soo Greyhounds visit the Sleeman Centre on Friday October 11th as they take on the Guelph Storm for their first meeting of the season.

The Guelph Storm enter Friday’s game with 2 wins and 6 points in their first 5 games of the season. Guelph is being led by sophomore D Daniil Chayka (3 goals, 4 assists) and Pavel Gogolev (2 goals, 4 assists) while goaltenders Owen Bennett and Nico Daws have split time in net both acquiring a win in the process.

The Greyhounds have had a strong start to their season winning 4 of their opening 6 games thus far and have outscored opponents 29-21 in that span. The Greyhounds are being led upfront by RW Jaden Peca (3 goals, 5 assists) and C Jaromir Pytlik (2 goals, 6 assists) while goaltenders Ethan Taylor and Christian Propp have also split game time.

The Greyhounds finished last season in 3rd place in the Western Conference with 96 points heading into the post-season. In the opening round of the 2019 playoffs, Sault Ste. Marie beat the Owen Sound Attack in 5 games outscoring them 26-15 to move on to the second round. The Greyhounds faced the Saginaw Spirit in the second round of the playoffs but quickly fell behind 3-0 in the series before eventually losing in 6 games.

Keegan Stevenson is heading into his 3rd OHL season as a leader on the Guelph Storm after being a solid contributor to the last seasons OHL Championship team. Keegan has 3 goals and 2 assists for 5 points in the opening 5 games of the season and is looking to set new career highs in goals (19) and assists (15) this season.

Jaromir Pytlik is on a roll to start his second OHL season with the Greyhounds after finishing with 19 points in 26 games last season. Jaromir has contributed 2 goals and 6 assists thus far through 6 games this season and is heading into the 2020 NHL Draft as a B level prospect.