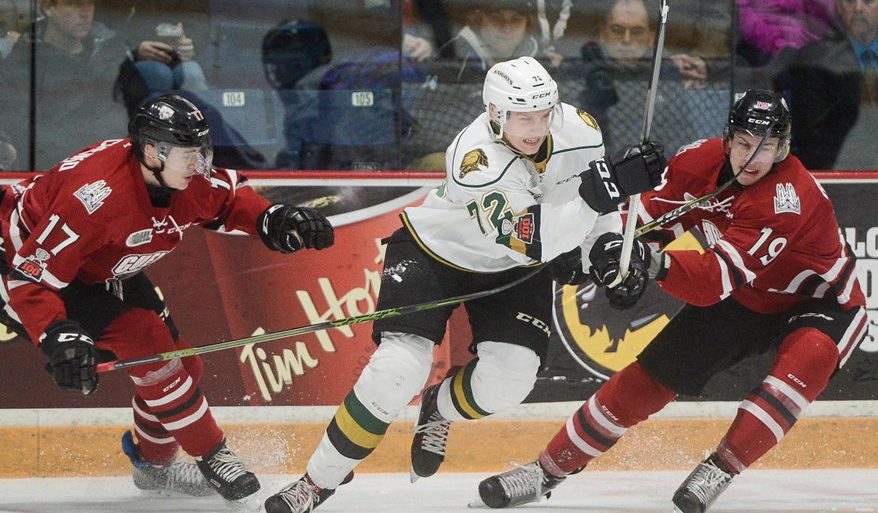 For a mid-week game, the Storm travel to London Wednesday night to take on the Knights at 7:00 pm. London leads the season series 3-2, but some of Guelph’s leaders have played good hockey against London this season. Goaltender Anthony Popovich shutout the Knights in game 1 and star defenceman Ryan Merkley has 8 points in the 5 games played so far.

Although London sold many of their top players before the trade deadline, they have still found a way to keep winning games. Going 7-3 in their last 10 games, London now has a record of 35-23-2-2 for 74 points. They currently hold the 4th seed in the Western Conference, with Owen Sound pressuring just two points behind.

Winger Alex Formenton was a 2nd round pick by the Ottawa Senators in 2017. He made the team out of training camp, but after getting into only one game with the Sens, he was sent back to London. He has played at a near point-per-game pace, scoring 23 goals and 18 assists for 41 points in 42 games this season. He was also a member of Canada’s gold winning World Junior Championship team, scoring two goals and two assists in seven games.

After clinching a spot in the playoffs for the first time in two years, the Storm are now gearing up for postseason hockey. Holding onto the 6th seed in the standings, Guelph has 65 points from a 28-25-5-4 record. With six games remaining in the regular season, it will be a tight finish as Saginaw and Windsor trail the Storm by one and two points respectively.

Isaac Ratcliffe has been a major part in the Storm’s success this year. With five goals over the weekend, he now has 37 goals and sits 8th in the league in goals scored. Ratcliffe leads the team in goals and is also tied for the team lead in points, with 25 assists to add to his goal total, giving him 62 points this season.

This division match-up will feature 8 players that have been drafted to the NHL. London has two of those players, Jacob Golden (Minnesota Wild, 2017, 5th round) and Alex Formenton (Ottawa Senators, 2017, 2nd round). The final 6 players are Guelph defencemen Mark Shoemaker (San Jose Sharks, 2016, 6th round) and Dmitri Samorukov (Edmonton Oilers, 2017, 3rd round) and forwards Nate Schnarr (Arizona Coyotes, 2017, 3rd round), Liam Hawel (Dallas Stars, 2017, 4th round), Alexey Toropchenko (St. Louis Blues, 2017, 4th round) and Isaac Ratcliffe (Philadelphia Flyers, 2017, 2nd round).

Two players that aren’t drafted but will be in this year’s NHL Draft are defencemen Evan Bouchard and Ryan Merkley. Both are stars and highly rated draft-eligible prospects. Evan Bouchard not only leads the league in points by a defenceman, but also leads the entire CHL in that category. He has 22 goals and 56 assists for 78 points this year. Ryan Merkley has also shown his creativity and offensive skill by putting up 12 goals and 50 assists for 62 points. Both players lead their respective teams in points.

The next game for the Storm will be a key matchup before the playoffs, as they invite the Saginaw Spirit into the Sleeman Centre on Friday March 9th. Puck drop is at 7:30 pm. The last time these two teams played went to overtime, with Guelph coming away with the win on home ice 4-3.